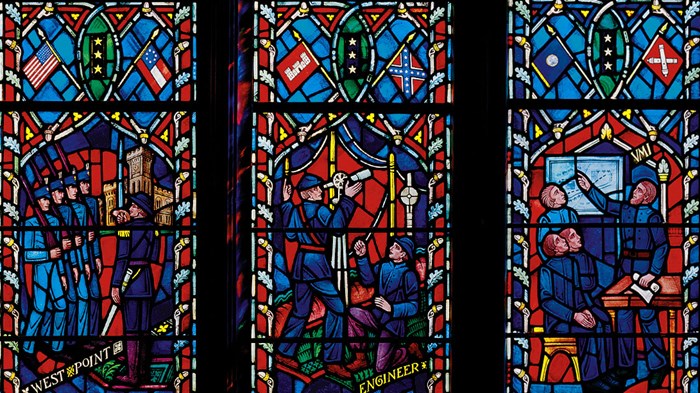 Update: Southern Baptists have voted to repudiate the Confederate flag.

“We call our brothers and sisters in Christ to discontinue the display of the Confederate battle flag as a sign of solidarity of the whole Body of Christ, including our African-American brothers and sisters,” states Resolution 7, passed today by an overwhelming majority of messengers to the annual meeting of the Southern Baptist Convention (SBC). [Baptist Press has the details.]

“It’s not often that I find myself wiping away tears in a denominational meeting, but I just did,” wrote Russell Moore, president of the SBC’s Ethics and Religious Liberty Commission. In a statement, Moore noted:

The Southern Baptist Convention made history today and made history in the right way. This denomination was founded by people who wrongly defended the sin of human slavery. Today, the nation’s largest Protestant denomination voted to repudiate the Confederate battle flag and it’s time and well past time.

The controversial resolution, proposed by Texas pastor Dwight McKissic, was presented for a vote in a “less strongly worded” form, but was strengthened from the floor, notes the Associated Press.

Much discussed was the speech given by Atlanta-area pastor James Merritt:

The resolution notes that in 1995, the SBC “repudiated ‘historic acts of evil, such as slavery,’ and committed ‘to eradicate racism in all its forms from Southern Baptist life and ministry.’” 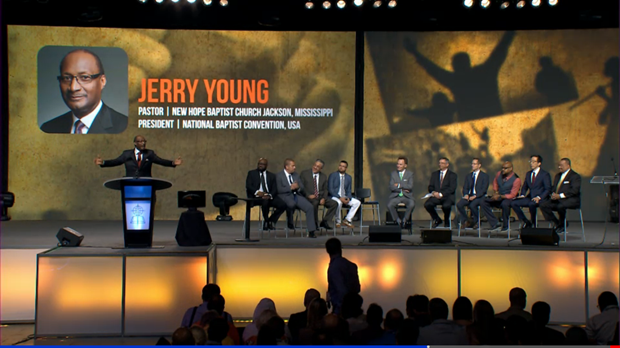 Race was one of the first topics that more than 6,000 messengers from Southern Baptist Convention (SBC) congregations addressed at their annual meeting this year.

“I am absolutely, totally convinced that the problem with America can be placed at the doorstep of our churches,” NBC president Jerry Young told SBC messengers. “Some would argue, particularly as it relates to eschatology, that perhaps it is not accurate. But I would argue that it was Christ himself who said, ‘You are the salt of the earth, and you are the light of the world.’”

Racism isn’t a sociological problem, but a sin problem, he said. ”If we’re going to change racism in the church in America, we’re going to have to change attitudes, and let this mind be in us that’s also in Christ Jesus.”

SBC president Ronnie Floyd said his heart has been burdened for racial unity since 18-year-old Michael Brown was shot by Ferguson police in 2014. 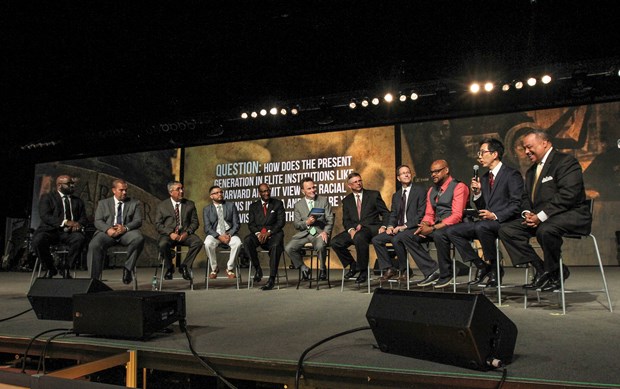 The SBC holds its "National Conversation on Racial Unity."

The SBC conversation comes just days before The Civilitas Group, a year-old coalition of pastors, university presidents, journalists, and ministry leaders, will meet in Charleston to commemorate the shooting of nine members of “Mother Emmanuel” AME Church last year.

Civilitas, which was founded by former Lausanne Movement executive chairman and American Bible Society president Doug Birdsall in response to the AME church shooting, has spent the past year hosting conversations across the country in order to bridge the white and black evangelical communities.

"In the days and weeks following the tragedy in Charleston, many in the white evangelical community wanted to do something to fight the plague of racism in our country and churches,” stated Birdsall. “However, we soon realized that white evangelical and African American leaders did not even know each other.”

Next week, a third evangelical group will take up issues of race. The Presbyterian Church in America (PCA), which last year voted to defer repenting imperfectly of racism in favor of repenting more perfectly this year, will attempt to do just that.

More than two-thirds of the 63 PCA overtures call for the denomination’s repentance for its actions during the civil rights era. While the denomination wasn’t founded until nine years after the 1964 Civil Rights Act, many of its churches were already in existence. Some barred blacks from membership, participated in white supremacist organizations, or stayed silent about Jim Crow laws.

“[O]ur denomination’s unwillingness to speak truthfully about our failure to seek justice and to love mercy during the Civil Rights period significantly hinders present-day efforts for reconciliation with our African American brothers and sisters and their participation in the PCA,” wrote the Missouri Presbytery in an overture supported by seven other presbyteries.

The group called on the general assembly to confess “our continued sins of racism and failure to love brothers and sisters from minority cultures” and to recommit itself “to bear fruit in keeping with our repentance.”

CT has previously reported on where John Piper and other evangelicals stand on #BlackLivesMatter, as well as how black and white Christians increasingly think differently about race.