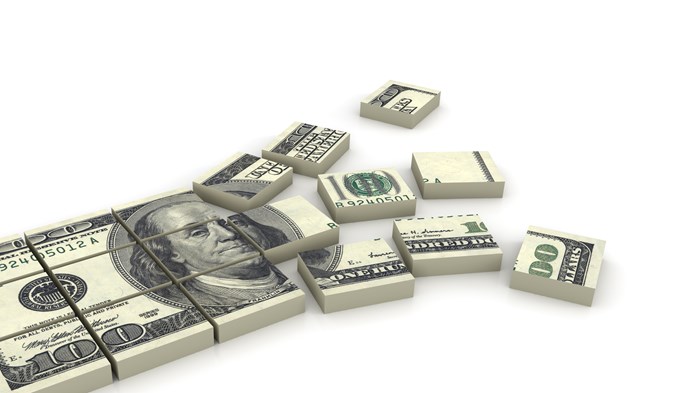 It’s not that giving to your local church isn’t important—it is, leaders told the National Association of Evangelicals (NAE).

But 76 percent say it’s fine if you want to give part of your tithe to a different ministry.

“Many evangelical leaders do not believe there’s a biblical requirement to give exactly 10 percent to the local church,” NAE president Leith Anderson said. “Giving generously out of what God has done for us is the main message.”

Some leaders referenced the “storehouse” principle found in Malachi 3:10, which says to “bring the whole tithe into the storehouse.” But they were split on what that meant; some said the local church is the storehouse, others that the storehouse isn’t a New Testament teaching.

“I have been taught—without reference to any biblical mandate—that any amount given outside of the local church should be done over and above the tithe,” author and speaker Deborah Pegues, who gives all of her tithe to her local church, told the NAE. “Nevertheless, I believe that everyone should be fully persuaded in his own mind as to the distribution of his tithe.”

Wheaton College president Philip Ryken agrees with that principle. “The church would have a much greater impact on America and in the world if in addition to tithing 10 percent to their local congregations, evangelical Christians gave an equivalent amount—or more—to other ministries,” he told the NAE. 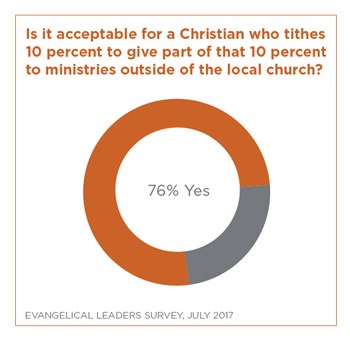 But The Expectations Project president Nicole Baker Fulgham said that “God’s work is God’s work.” If people feel compelled to split tithes between churches and charities, “I don’t see any biblical reason why they shouldn’t.”

For most Christians, it may be a moot point.

“Only 10 to 25 percent of the families in the church” tithe, according to the 2013 State of the Plate report (cosponsored by CT’s sister publication Church Law & Tax).

The numbers match a Barna Group finding that 5 percent of adults tithe to a church or charitable organization; among born-again Christians, the rate rose to 12 percent.

Almost all churchgoing tithers—who typically give between 11 percent and 20 percent of their income—make the local church a priority (97%), the State of the Plate report found. Their gifts supply “50 to 80 percent of the funding.”

While giving to church isn’t as popular as it used to be, religion still receives about a third of all donations nationwide (32%), Giving USA found. In 2016, Americans gave nearly $123 billion to religion. That’s up 3 percent from 2015, and twice as much as the next highest category, which was education at 15 percent.

The Evangelical Council for Financial Accountability also measures how much the local church pulls in, though it’s limited to looking at the 180 local churches and 28 denominations that make up part of its 2,200 members.

In 2015, those churches received $886 million, while those denominations were given $410 million. Of the 27 categories of Christian nonprofits, those 2 categories were in the top 10 in averaged donations, but came in far behind the two behemoths of relief and development (the leading category, with nearly $2 billion in donations overall) and child sponsorship.

In a 2012 CT roundup of expert views on splitting one’s tithe, Financial Seminary founder and author Gary Moore pointed out that, at the two affluent mainline churches he served with, “we spent more of our general budget on lawn care than true benevolences.” While an Empty Tomb study showed that evangelical congregations gave away more, “even that was due to a growing number of members,” he said.

Dividing up your tithe is “better than tossing an occasional spare $5 bill into the collection plate and thinking we have done our part,” said Douglas LeBlanc, author of Tithing: Test Me in This. But it isn’t what God asks.

“How I donate money expresses power,” LeBlanc said. “If I carve my tithe into slices of my own liking, I tighten my grip on power, and mammon tightens its grip on me. I am better aware of the ever-deepening joy found in God's generosity when I surrender control of the first 10 percent to the community that welcomes me, a wretched sinner, week after week and challenges me to become something more.”

Editor’s note: This post has been updated to clarify the citation of CT’s Open Question from our October 2012 issue.