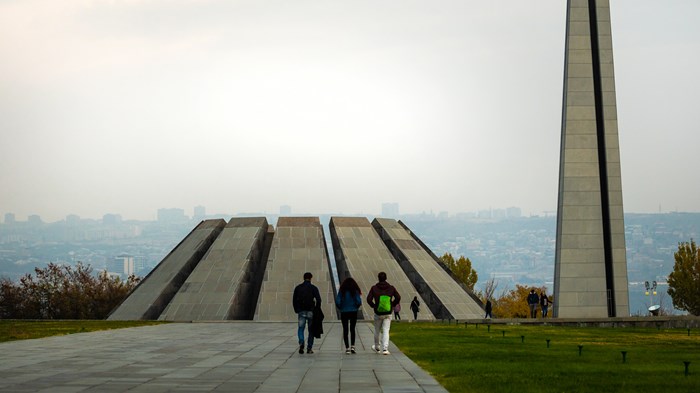 “I’m thankful that this resolution has passed at a time in which there are still survivors of the genocide,” said the Democrat from New Jersey, pausing for 20 seconds before being able to continue. “[They] will be able to see that the Senate acknowledges what they went through.”

About 1.5 million Armenians were killed between 1915 and 1923, as the defeated Ottoman Empire transitioned into the modern Republic of Turkey. Less than half a million survived.

Turkey concedes that many Armenians died in the fighting and aftermath of World War II, though it believes the numbers are inflated. It calls for a joint academic commission of Turkish and Armenian scholars. But it rejects the term “genocide.”

The Senate’s Resolution 150 is a duplicate of the US House of Representatives’s Resolution 296, approved overwhelmingly six weeks earlier by a 405–11 vote, as CT reported. But they are not “joint resolutions,” and therefore neither require President Donald Trump’s signature nor have the force of law.

Following the House approval, Trump asked Republican Senate leaders to block the bill, according to al-Monitor. Engaged in negotiations over Syria and Russian weapons purchased by Ankara, Trump followed longstanding political practice and yielded to the objection of the fellow NATO ally. (During the administration of President George W. Bush, nearly 70 percent of air supplies to the US military in Iraq went through Turkey’s Incerlik airbase.)

“[Turkey has] thumbed their noses at us,” he said, according to The New York Times. “If we just look the other way on this, we will be viewed as weak.”

Instead, the Senate rebuke satisfied Armenian-Americans.

“I’ve invested, like, decades of my life," said Aram Hamparian, executive director of the Armenian National Committee of America. “So it was a sense of relief and a bit of a vindication that [the US] put up a firewall against foreign countries coming into our democracy and dictating to us.”

The entertainment industry also contributed to the effort. Both Dean Cain, of Superman fame, and Kim Kardashian traveled to Armenia and campaigned in the US.

Armenia was the first nation to officially adopt Christianity, in 301 A.D., and the faith first arrived as early as 40 A.D., traditionally attributed to the preaching of Jesus’ disciples Bartholomew and Thaddeus.

The US Commission on International Religious Freedom tweeted its “applause.” In Defense of Christians, an advocacy group, stated the Senate “did the right thing.”

Armenian Orthodox Leader: “We May Forgive One Day, But We Will Never Forget.”

“This is our legitimate claim: that the international community make a visible, tangible manifestation of their concern in respect to human rights, and recognize the Armenian Genocide,” Aram I, Catholicos of the Holy See of Cilicia, told CT following the House vote in November. Based in Beirut, his position is linked historically to the Armenian presence in western Turkey; he is responsible for the entire diaspora.

“It is our firm expectation that the Senate will reaffirm their decision.”

Now that it has, Garegin II, Supreme Patriarch and Catholicos of All Armenians, based in Armenia, offered his appreciation—and plea.

“Our prayer is that God keeps the life of all humanity in peace, free of tragedies and disasters like the Armenian Genocide,” he stated, “for the sake of calm future of all nations.”

But the effort to politically recognize the genocide has not been universally welcomed by Armenians—especially in Turkey. A divided community of 70,000 has witnessed its leaders’ side with their nation of citizenship.

In a 2007 interview, Patriarch Mesrob II stated he did not want to saddle modern Turkey with the “collective punishment” of the Ottoman Empire, and endorsed Ankara’s offer for a joint academic committee. International efforts to recognize a genocide only harm Armenian relations with Turks, he said.

Mesrob, consecrated in 1998, succumbed to dementia 10 years later. Yet despite the official petition of the Armenian Orthodox patriarchate, Turkey refused to permit a new election.

Instead, in 2008 Aram Atesyan was elected to serve as acting patriarch. In a 2016 letter to the Turkish president, he condemned the Armenian Genocide resolution of the Bundestag, Germany’s parliament.

“This historical pain of the Armenian nation is considered as a tool for accusing and punishing the Turkish state and nation,” he wrote. “The ones who are willing to see the truth can realize how [we] have been abused by imperialist powers.”

Mesrob died in March of this year, and Atesyan was one of three candidates—after new controversial Turkish regulations—eligible to succeed him. In September, the Ministry of Interior limited the pool to clerics currently serving in the Istanbul patriarchate.

Prior regulations allowed anyone born in Turkey to qualify. The new regulation eliminated 10 candidates, and one of the three who were eligible withdrew in protest, as did eight members of the electoral board.

“I will not consider the chosen one as my patriarch,” stated Garo Paylan, a legislator in Turkey’s parliament.

Sahin Gezer, a former member of the patriarchate’s property commission, called the process “dreadful,” and remarked the entire debate around process and candidates was marked by insults and accusations.

In the end, Sahak Masalyan received 102 out of 119 delegate votes to become the 85th head of the Armenian Patriarchate of Constantinople and All of Turkey.

“The community was facing many challenges, and for practical reasons they were waiting for a leader,” Haidostian, the university president, told CT.

“It is difficult for us to know about the circumstances, but we are happy for them.”

But from Armenia, Garegin II spoke of his “boundless joy.”

“We pray to Almighty God to grant you strength and power to assume the spiritual mission … with wisdom and high responsibility,” he stated to Masalyan. “May the Lord help and support you, granting you welfare and success in your spiritual service.”

Masalyan recalled the servanthood of Jesus washing the feet of his disciples, pledging to bring “something new.”

“Today, you did not elect a patriarch, you elected the first servant of God and nation,” he stated. “Now I have to ask you to pray for me.”