Despite financial and immigration hurdles, ministries led by first-generation pastors are more effective than the average church plant, according to a new LifeWay study.
Bekah McNeel|July 24, 2019 10:20 AM 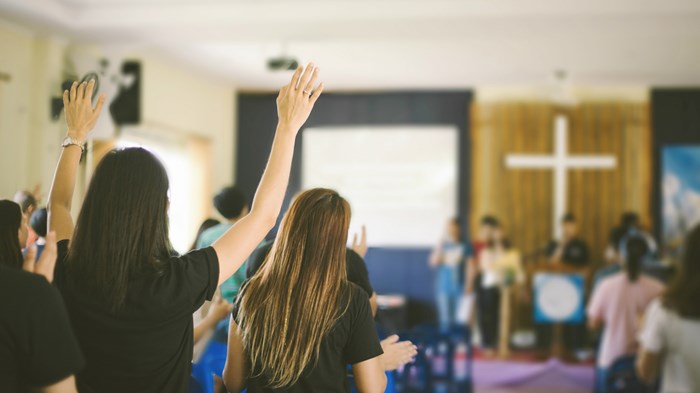 First-generation immigrants are leading the Latino evangelical expansion in the US—drawing in more unchurched believers and new converts than the average church plant, despite having smaller congregations, less funding, and tensions surrounding US immigration policy.

The study—sponsored by the Send Institute at Wheaton College’s Billy Graham Center, funded by 12 denominations, and fielded by LifeWay Research—surveyed 218 Hispanic church plants along with “new ministry expressions” such as added campuses or church mergers. It found that 80 percent of their founding or lead pastors were born outside the US, as were two-thirds of their members on average.

The research was presented to 120 church planters and ministry leaders—half Latinos—from 65 denominations at a summit at Wheaton College on Tuesday. It comes as the increasing flow of Latino immigrants to the US has sparked heated policy debate. (Note: In this article, Hispanic refers to the churches surveyed by LifeWay, while Latino refers people of Latin American descent, including from Brazil and Haiti.)

The Latino population is growing, especially in the South, where 59 percent of the 218 new congregations surveyed are located (half are Southern Baptist). And the evangelical faith is growing with it.

New Hispanic ministries saw an average of 53 first-time professions of faith over their first four years, according to the survey. Though they are typically smaller than the average church plant, they have about the same number of new converts per year, making them “evangelistically more effective per capita,” said LifeWay Research executive director Scott McConnell.

A quarter of attendees in new Hispanic congregations were previously “completely unchurched” (26%), and almost another quarter previously attended a Catholic church (22%). Only 29 percent were previously members of other Protestant churches. 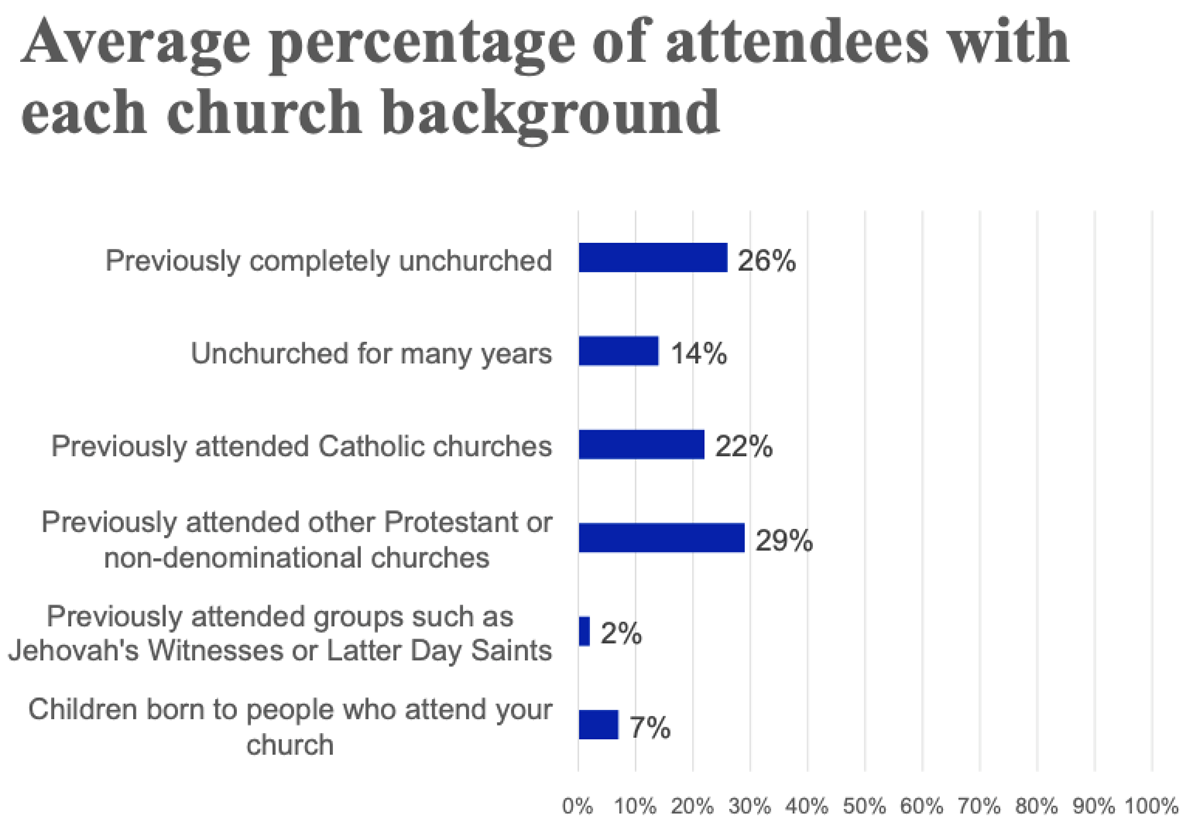 Investing time instead of planning events

Latino pastors who have worked inside and outside Hispanic ministry contexts can attest to the differences reflected in the data. Comparing the Hispanic church plants and new ministries surveyed in 2019 with overall church plants surveyed by LifeWay in 2015: 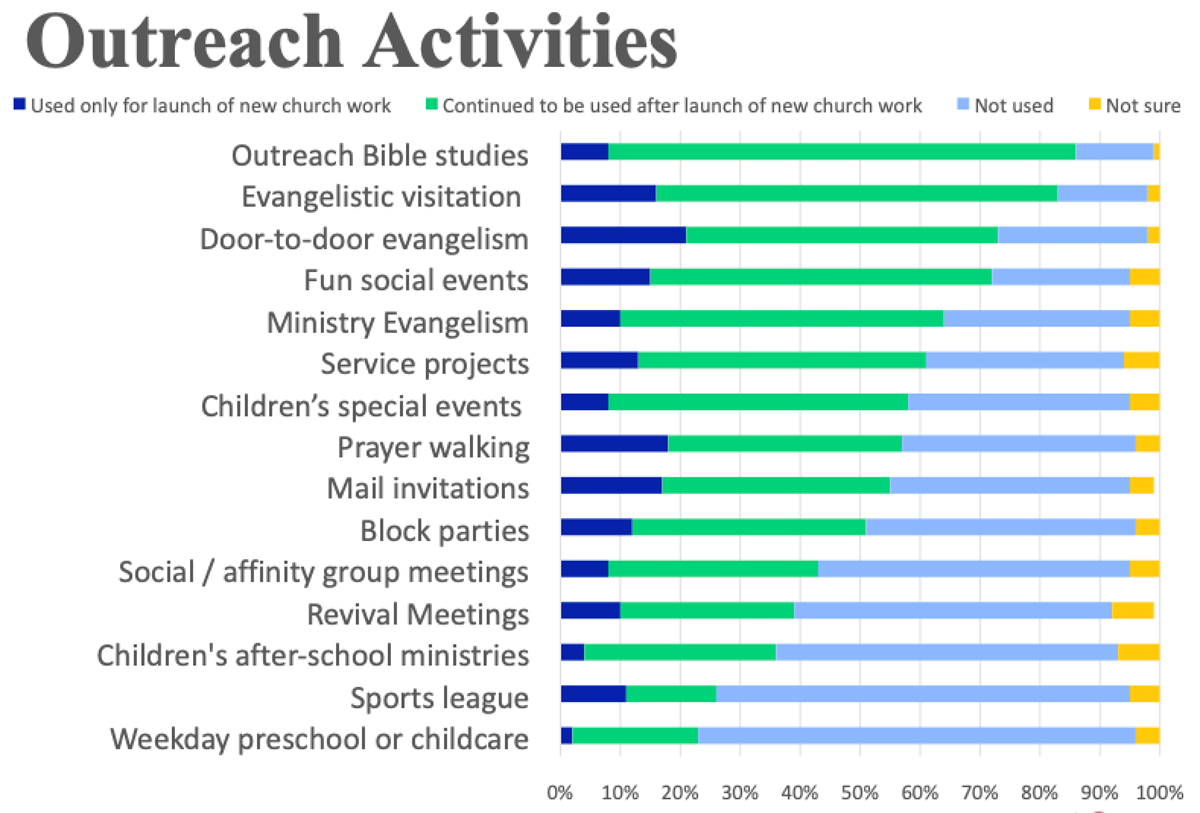 For the Latino community, structured, scheduled events aren’t necessarily a good fit with their time-intensive approach to building relationships, said Marco DeLeon, pastor of Storehouse McAllen, an Acts 29 church in the Rio Grande Valley in Texas.

The 33-year-old pastor, a Mexican American citizen born in the US, works with churches reaching out to Latino communities in Texas, Nevada, and Georgia. He presses pastors to focus less on Latino names in their roles, service calendars, and event registrations. Look instead, he said, at how much time has been invested in the relationship.

“They were more worried about trying to figure them out than getting to know them,” DeLeon said, and they were trying to do so in church contexts where the Latino people were not comfortable. To build trust, DeLeon explained, “You need a table with food on it and you need a lot of time.”

Pastors who say the following are appropriate measures of success for Hispanic church plants:

Alejandro Aguilar, pastor of Iglesia Oasis in Crystal Lake, Illinois, also wanted to see more time invested and less of a focus on numbers as a measure of success (half of surveyed pastors agree). Since the Latino community faces more marginalization than the average evangelical congregation in the US, their churches have unique needs and assets in ministry.

“The Anglo churches are not always ready for the stories Latinos bring to their doors,” said Aguilar, who emigrated from Mexico. When asked by other pastors how to reach Latino people, he advises, “Listen to the stories. Take your time.”

When Aguilar began his ministry career at Willow Creek Community Church, a multisite megachurch in the Chicago area, he saw the size of the church as a sign he was ministering as powerfully as possible.

While white church leaders expect ministries to grow quickly, many Latino ministers—brought up under American and Latin American megachurch pastors—expect them to grow large. Nearly half (49%) of the Hispanic church plants and other new ministries surveyed are within the largest US denomination, the Southern Baptist Convention, which has over 500 congregations with 1,000 or more people.

Though they know that recent immigrants and Spanish speakers will be more difficult to reach, many Latino ministers still measure success by the numbers, Aguilar said. The church planting movement, which involves starting from scratch in strategic locations, is a “totally and completely different language for many (Latino leaders),” he explained.

At Iglesia Oasis, he prioritizes going deeper with his congregation to understand the challenges they’re facing, including poverty, domestic violence, anxiety, or depression.

Almost half (48%) of the new Hispanic congregations surveyed are not financially self-sufficient and receive significantly less funding: $12,863 in outside donations the first year, compared to $43,514 at church plants overall. 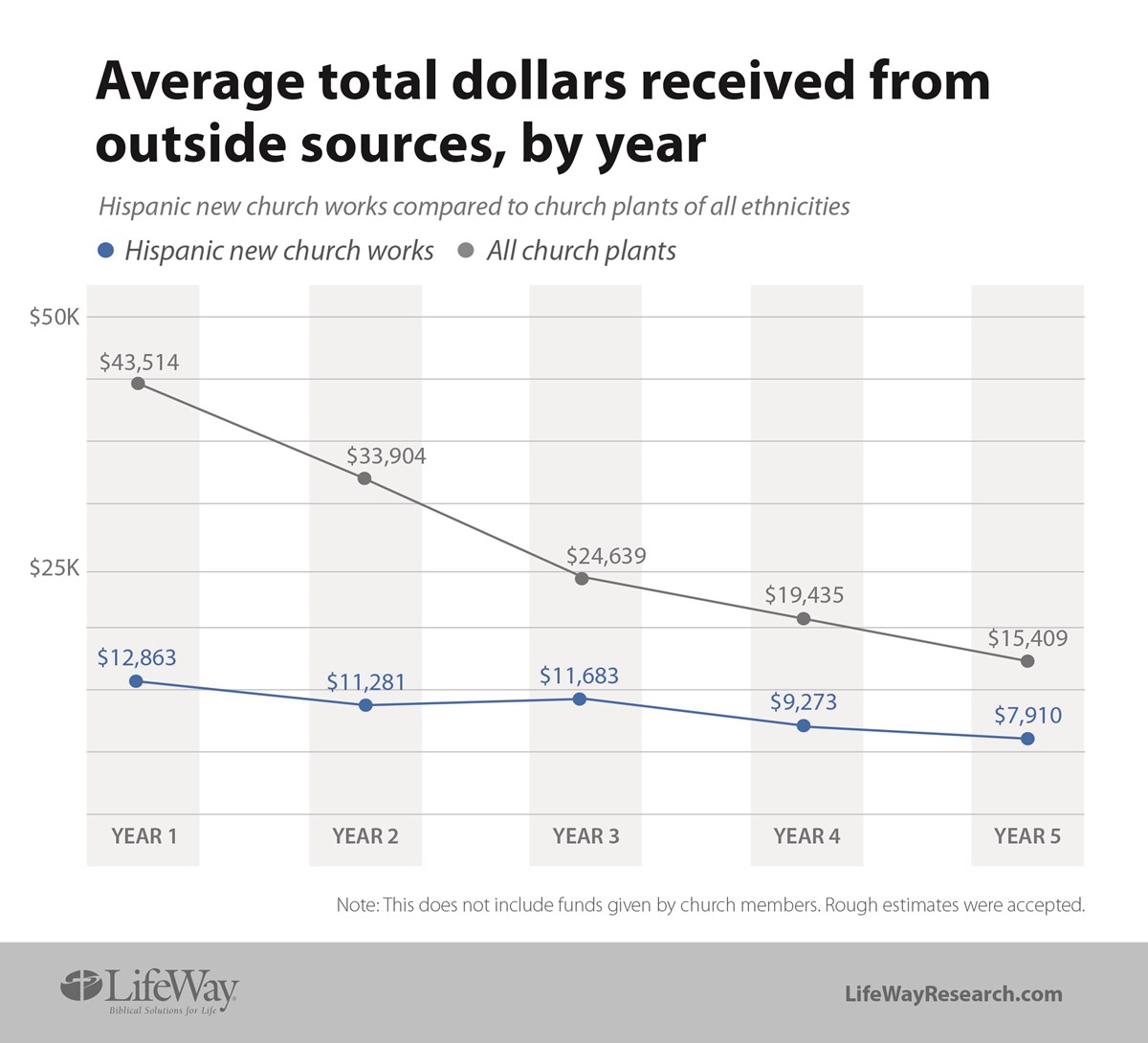 It’s likely that money will be tight for members tithing within new Hispanic congregations as well. According to Pew’s Religious Landscape Survey, 54 percent of Latino evangelicals make $30,000 or less per year, compared to 32 percent of white evangelicals.

LifeWay also found that significant factors contributing to higher worship attendance year-over-year included meeting primarily outside the worship location (such as in members’ homes) and holding worship services on weeknights. 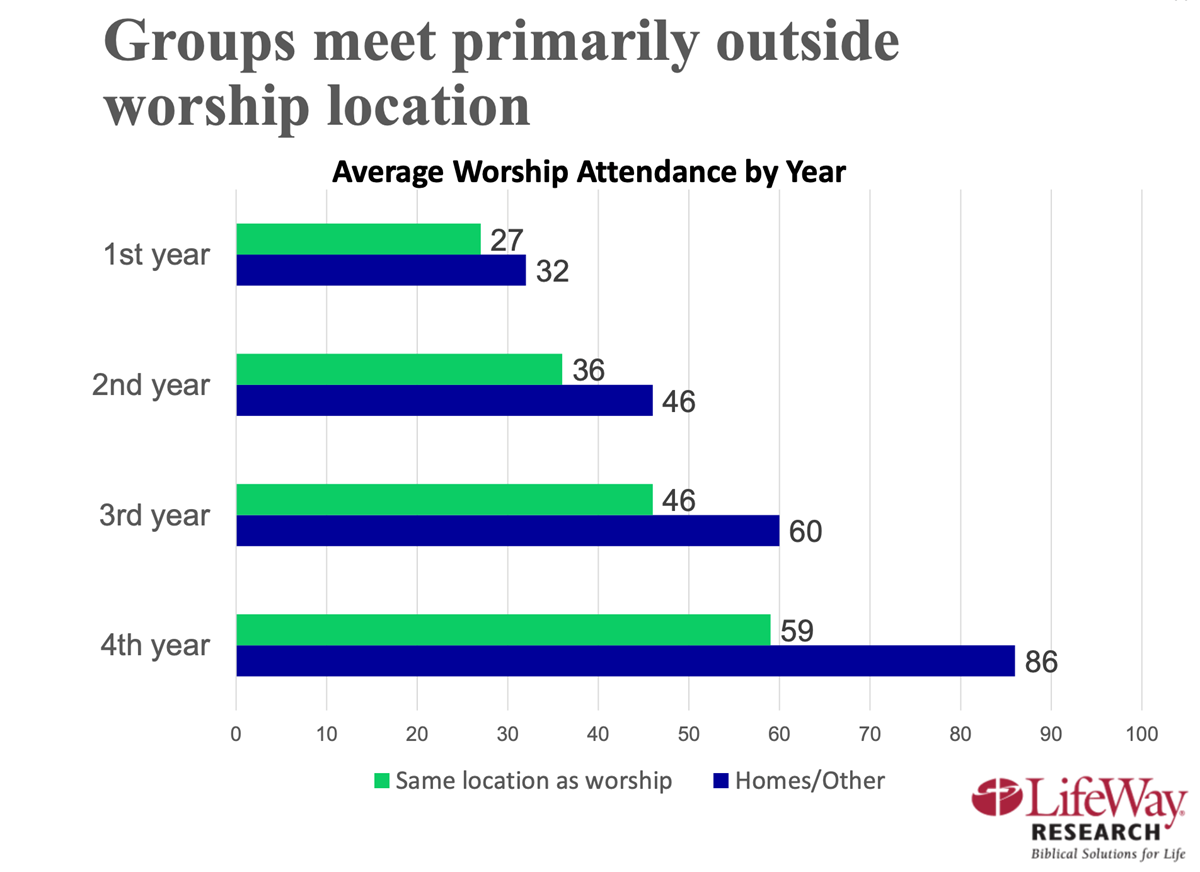 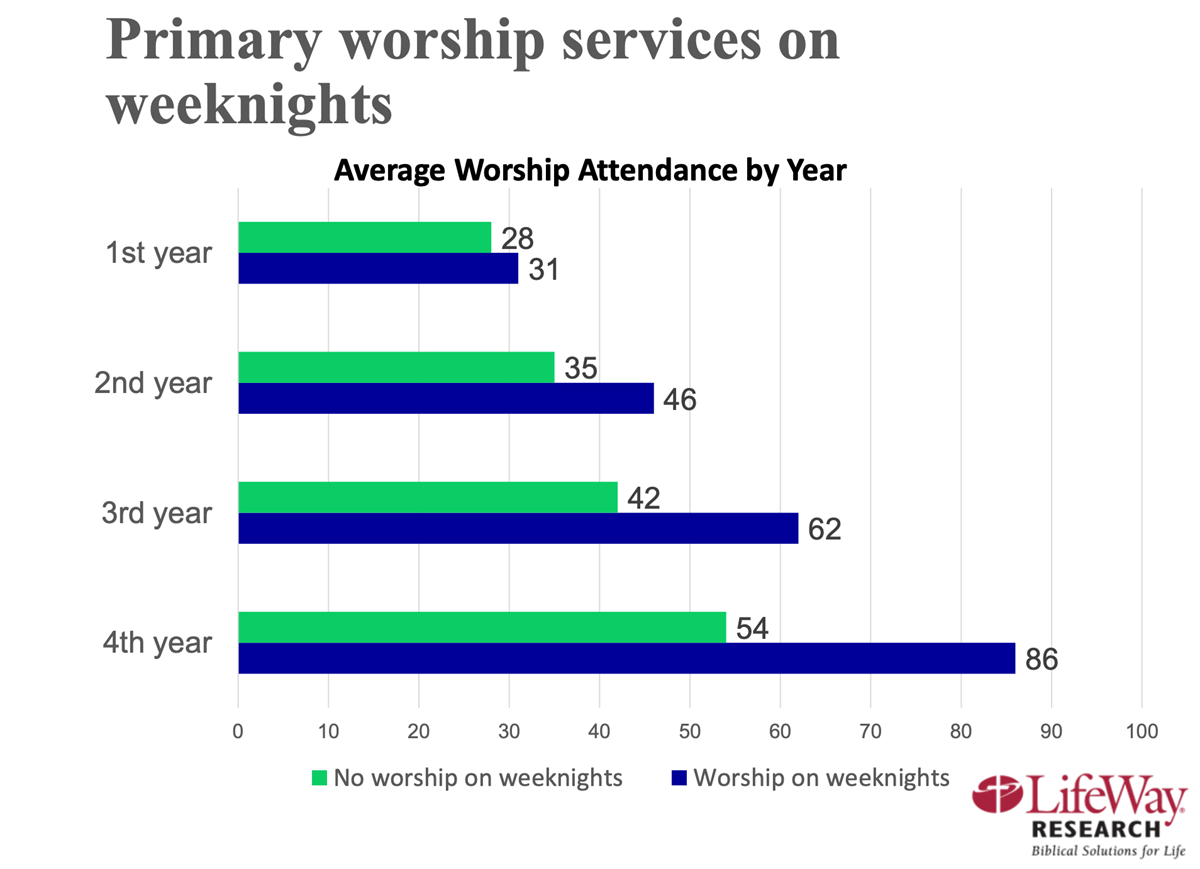 Facing fear and suspicion in the pews

Immigration is another variable that affects new Hispanic congregations in particular. Among respondents, 25 percent reported that at least one member of their leadership team had undocumented legal status, while on average 21 percent of their attendees lacked legal status.

That can have a large impact on church participation. In a previous story, pastors told CT about how members stopped coming to church due to the threat of raids by Immigration and Customs Enforcement. Some of the church’s most faithful servants “stopped showing up,” one South Carolina pastor said. As one Christian community development advocate told CT, if parents are deported, the children they leave behind become orphans who need care from the church.

Close family ties are important to many Latinos. When mixed with immigration, multigenerational ministries are also multicultural, DeLeon explained.

A first-, second-, or third-generation immigrant often approaches church involvement differently, with some newer immigrants unsure about expectations around meetings and membership, suspicious of being recruited into some kind of cult or service club, or being asked to trade in their culture for a new one.

“What I often see is the American church trying to fit Hispanic people into this system,” DeLeon said, “confusing assimilation with discipleship.”

While the second generation may inherit some of their parents’ apprehensions, DeLeon has observed that by the third generation most are not surprised by event-based outreach or efforts to assimilate them into the culture of the church—get them involved in a small group, sign up for nursery duty, attend women’s ministry events, etc.

To address cultural disconnects, leadership is key. Shared language is beneficial, and the LifeWay survey showed that Spanish-language worship was an integral part of the vast majority of new Hispanic congregations: 64 percent conduct services all in Spanish, while 13 percent have bilingual services. (Others offer translation services.)

LifeWay even found that having a worship service all in Spanish was a statistically significant factor in new Hispanic congregations having unchurched attendees: 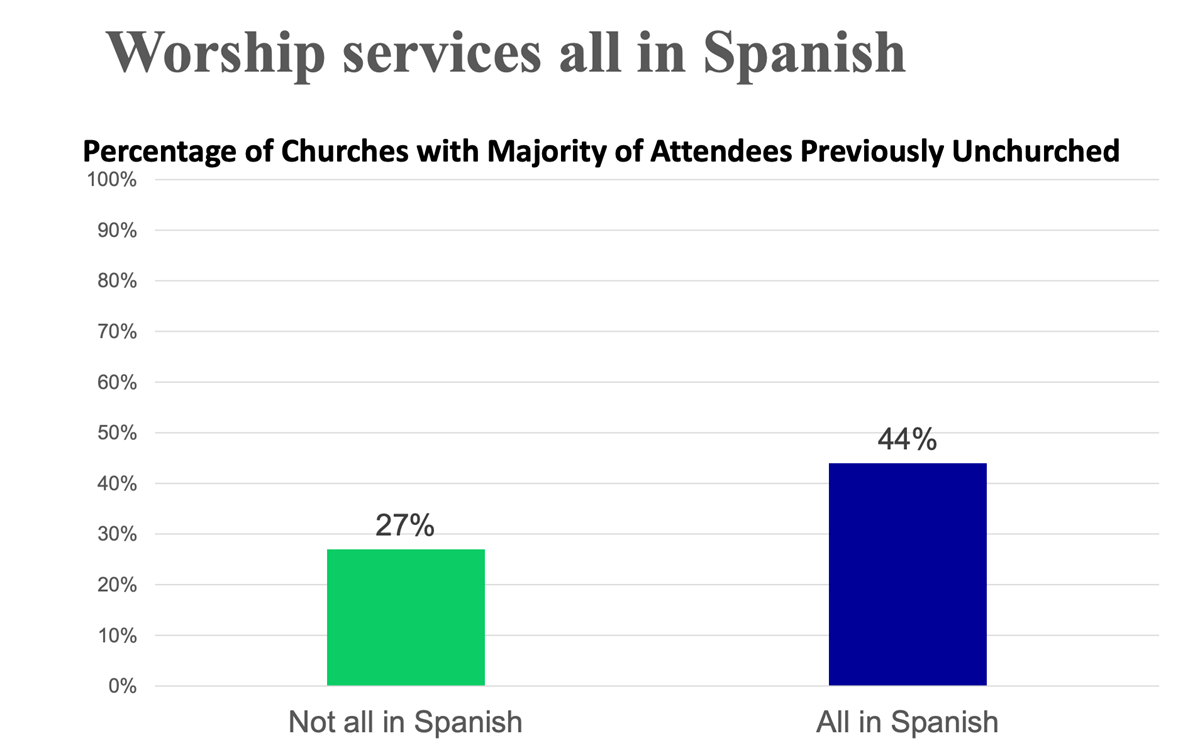 LifeWay also found that worship songs with Latin rhythms—regularly incorporated into services by 32 percent of those surveyed—were a statistically significant factor in new Hispanic congregations starting a daughter church: 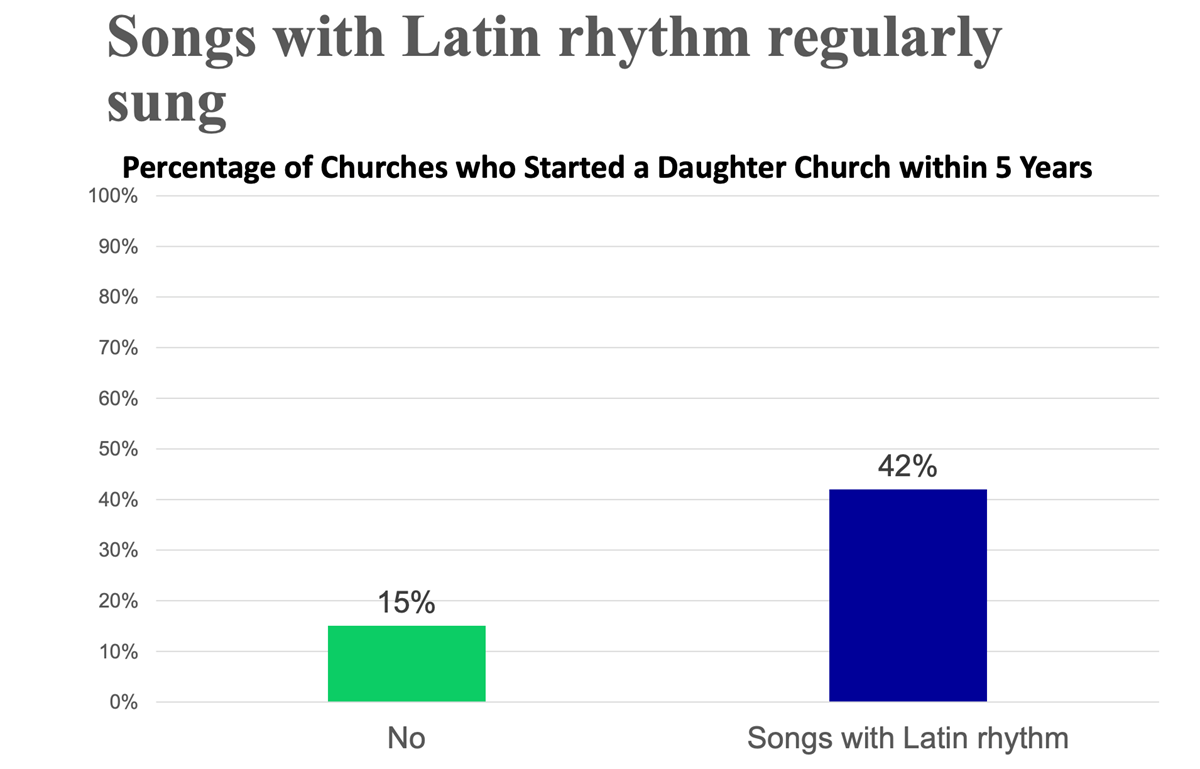 LifeWay’s research also touched on the need for cultural sensitivity and hiring culturally Latino pastors (not just Spanish speakers), but even they will need to prepare to think cross-culturally since not all Latinos are the same.

For example, only 24 percent of the new congregations surveyed are led by a pastor who identifies as Mexican, while 42 percent said most of their congregation is Mexican.

“While there are crossovers in Hispanic cultures, there are differences,” DeLeon said. If the pastors of Hispanic church plants have spent enough time with their congregants to see and understand that difference, he sees that as a metric worth noting.

The results of the full study can be found here.