The lifelong leader and teacher encouraged pastors and politicians alike to “Let God Love” them.
Kyle Rohane|June 12, 2019 10:18 AM 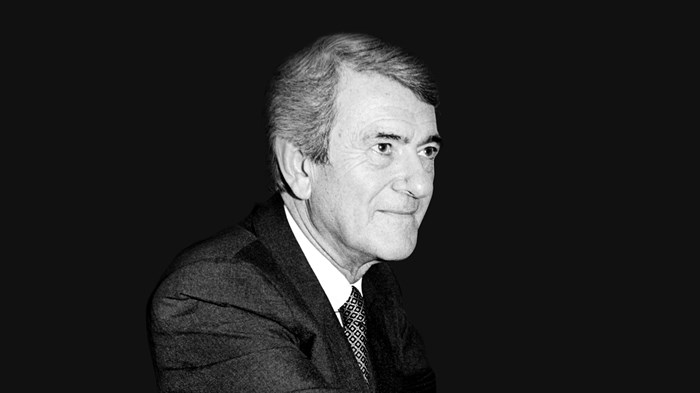 Acclaimed author, speaker, and preacher Lloyd John Ogilvie—who pastored historic First Presbyterian Church of Hollywood, California, for 23 years and served as chaplain of the US Senate from 1995 to 2003—died last week at age 88.

Though Ogilvie’s aspiration in high school was to become an actor, the influence of classmates Bruce Larson and Ralph Osborne at Lake Forest College led him in a different direction. These young men (both would become influential Presbyterian pastors) shared an interest in personal piety and social concern, markers that would define Ogilvie’s future ministry. After graduation, Ogilvie attended Garrett Theological Seminary at Northwestern University and later studied at New College, Edinburgh, where he “fell in love with the awesome task of preaching.”

From there, Ogilvie pastored Winnetka Presbyterian Church in Illinois and First Presbyterian Church in Bethlehem, Pennsylvania, before accepting the position of pastor at First Presbyterian Church of Hollywood in 1972, where he stayed for 23 years. Rather than becoming an actor himself, Ogilvie used his oratory skills to preach God’s Word to those in the movie industry, the business world, and even politicians. US Senator Mark O. Hatfield of Oregon said of Ogilvie, “I’m mesmerized by his preaching. His words are more than words of eloquence. I really think it’s an incarnation experience to hear him. It’s truly a living gospel.” Hatfield would later prove important in Ogilvie’s selection as Senate chaplain.

I preach to a procession: church members who need a fresh touch of the power of God, people who don’t know God and aren’t part of any church, Christians who’ve just come to visit, and others who are facing perplexing problems. … My big challenge is to present the gospel in a way that will be an initial invitation to those who don’t know Christ and an encouragement to those who do and who need to get on with the responsibilities of discipleship.

During Ogilvie’s tenure as pastor, Hollywood Presbyterian remained in its urban location at the corner of Gower Street and Carlos Avenue, yet it drew its congregation from Los Angeles’s many suburban neighborhoods. Though he had several opportunities to move the church to a more central, suburban location, Ogilvie insisted that it was important to engage the congregation in cross-cultural, inner-city ministry. He told Leadership that he called attendees of Hollywood Presbyterian to “a commitment to be involved in at least one of the major crises in our community. That may be anything from runaway children, to the homeless, to those facing poverty and hunger.”

Dan Baumgartner, senior pastor at Hollywood Presbyterian from 2010 until three weeks ago, said this about Ogilvie’s tenure at the church: “Lloyd Ogilvie had a tremendous impact on the Hollywood Presbyterian community and the city of Los Angeles in his years here. Guiding a historic church through some turbulent cultural decades, he introduced many to faith in a personal God. He built bonds with diverse Christian leaders across Los Angeles, leading times of prayer and doing kingdom work in an ecumenical way.” Baumgartner didn’t know Ogilvie before he started with the church in 2010, but the two men quickly developed a close relationship. “From day one, Lloyd reached out and became a good friend and prayer partner and was totally supportive of me and the church he loved deeply.”

While at Hollywood Presbyterian, Ogilvie eventually found his way onto TV screens, developing and hosting the nationally syndicated media ministry, Let God Love You, which ran for 17 years as a weekly television program and for 10 years as a daily radio broadcast. This was supported entirely by contributions from viewers and listeners, and Ogilvie received “not a dime” for his work with the media ministry. He also became a prolific speaker at evangelistic events, a writer of over 50 books, and general editor of the Communicators Commentary series.

As his stature grew within the Presbyterian Church (USA), Ogilvie became a key spokesperson for evangelicalism and advocate for biblical inerrancy within the denomination. He described himself to historian Randall Balmer, who was at the time researching mainline Protestant congregations, as “an evangelical voice in a liberal denomination” (“the inflection in his voice underscoring the word liberal,” Balmer added).

In 1995 Ogilvie was selected as the 61st chaplain of the US Senate, where he opened the legislative body in daily prayer, provided spiritual counsel for senators and their families, and established a number of Bible studies for senators, their spouses, their chiefs of staff, and others. “I would not use the prayer as an opportunity to share my convictions about issues,” he said after his election to the position. “I think sometimes prayer is used in public situations to communicate to a human audience more than to communicate to God. And I would not want to preach to the Senate through prayers made to God.”

In a 2000 interview with Leadership, Ogilvie described his primary role as Senate chaplain in this way: “We [Ogilvie and trained volunteers] take the lead in helping people relate their needs and problems to the power of God. … It’s ongoing involvement in prayer and Bible study that opens the way for people to receive supernatural power and healing and hope when special needs arise.”

After retiring from the Senate chaplaincy, Ogilvie became president of Leadership Unlimited, speaking regularly at professional conferences, clergy meetings, and churches. In 2006 he helped establish the Lloyd John Ogilvie Institute of Preaching at Fuller Seminary, with whom he partnered to present the Preaching with Passion clergy conferences.

When John Ortberg, pastor of Menlo Park Presbyterian Church in California, was a student at Fuller Seminary (working at a Baptist church), he would sneak over to Hollywood Presbyterian when he had a weekend off to watch and learn. “Lloyd John Ogilvie was a kind of statesman in the world of evangelical Christianity whose type is sorely needed and who will be badly missed,” said Ortberg. “He deeply valued the life of the mind and was a model scholar-pastor. At the same time, his commitment to a life of prayer and a fresh experience of intimacy with God shone through almost every sermon. He read widely, thought deeply, wrote honestly, and preached movingly. His voice—remarkable as it was—counted for little next to the more remarkable words that it uttered. How good God was to lend him to us for a while.”

“Many knew and profited from his ministry,” wrote Presbyterian minister and evangelist Leighton Ford in a tribute to Ogilvie. “I knew him as a friend, never close geographically, but always be [sic] frequent phone calls, and sometimes at conferences together. … I love him, thank God for him, and recommend his ongoing ministry through his online sermons and his writings.”

Tod Bolsinger, vice president and chief of leadership formation at Fuller, praised Ogilvie in a tribute at the seminary’s website. “Lloyd Ogilvie welcomed me as a pastor on his church staff and believed in me when I had little more than brash enthusiasm,” said Bolsinger, who served with Ogilvie at Hollywood Presbyterian as associate pastor of discipleship and spiritual formation. “My life and vocation were unmistakably formed by the words, example, life, and faithfulness of this pastor-preacher.”

On Monday, June 10, Barry Black—who succeeded Ogilvie as Senate chaplain in 2003—opened the US Senate with the following prayer:

Thank you for the life and legacy of Dr. Lloyd John Ogilvie, the 61st chaplain of the United States Senate. Accept our gratitude for his unswerving integrity, ethical congruence, exemplary life, and sanctified service. We praise you for his preaching and writing gifts that provided counsel and guidance, beaconing us to start and maintain a relationship with you.

Senate Majority Leader Mitch McConnell also reflected on Ogilvie’s spiritual leadership Monday: “So many people sought guidance, comfort and counsel from Lloyd. And every single day, he provided it. A joyful, consistent, straightforward messenger and example of God’s love.”