List highlights the minority of Fortune 100 companies that include faith in diversity initiatives.
Megan Fowler|February 11, 2020 10:19 AM 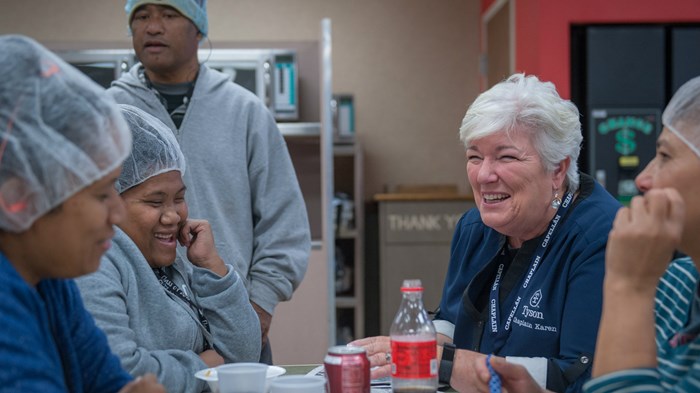 Karen Diefendorf starts her days at Tyson Foods by checking in with the human resources and nursing staff at the Springdale, Arkansas, facility. After getting any personnel updates and taking care of emails, she puts on personal protective equipment and hardhat affixed with her title: CHAPLAIN.

Diefendorf, who comes out of the independent Christian Churches and Churches of Christ movement, wore the chaplain badge during her 24-year career in the Army before she began her work at Tyson, where she now does daily rounds to meet with employees. It’s so noisy on the production floor that she relies on a thumbs up, thumbs down system to see who might need counsel, prayer, or guidance.

“If I get a thumb sideways, thumbs down, for sure I’m going to meet them in the break room and see what that’s about,” said Diefendorf, a graduate of Lincoln Christian College and Lincoln Christian Seminary. “If I need more than the 15-minute break or have multiple people I need to see, any chaplain is free to go to that person’s supervisor and work a time to get them off the line.”

HR experts consider chaplaincy a way for companies to see and support their employees as “whole people,” to signal that they don’t have to pretend to leave their hurt at home when they come to work. Done right, these programs—and others particularly designed for people to discuss their faith—can work in tandem with HR to improve morale.

“When you look at the whole argument for an inclusive work environment, it is to make people feel that they are valued as human beings,” said Kent Johnson, senior corporate adviser with RFBF. “The HR profession has come to realize that people matter, right where they are. The emphasis on creativity, teamwork, the need for new ideas has just taken off in the last decade. When people feel like they can bring their whole self to work, that’s the motivation for a lot of companies to look into this.”

For most companies on RFBF’s Corporate Religious, Equity, Diversity, and Inclusion (REDI) Index, religious programs fall under broader diversity initiatives, such as those for other identity groups like race, gender, and sexual orientation. Top-ranked Google (parent company Alphabet) offers “employee resource groups” for people of faith who work there.

These groups, abbreviated ERGs, function like sanctioned “clubs” within the company, designated groups for employees to meet in an interfaith setting or in a faith-specific setting to discuss things like company culture, holiday observances, and religious accommodations. They can also serve as places for people of faith to find a sense of solidarity, mentorship partnerships, and community within the company.

Google’s Inter Belief Network includes chapters for Christians as well as Jews (“Jewglers”), Muslims, Buddhists, and other faiths. Its founder and global chair, Barbara Phillips, also leads the Christian Fellowship chapter. Last year, she spoke at a work-faith conference in Silicon Valley about her role, quoting Scripture and worship songs in her presentation.

At American Express, ranked ninth on the index, the Christian Employee Network called SALT is one of 16 “colleague networks” in the company. Through SALT, Christians at AmEx have gathered for weekly prayers by conference call and participated in corporate charity initiatives. 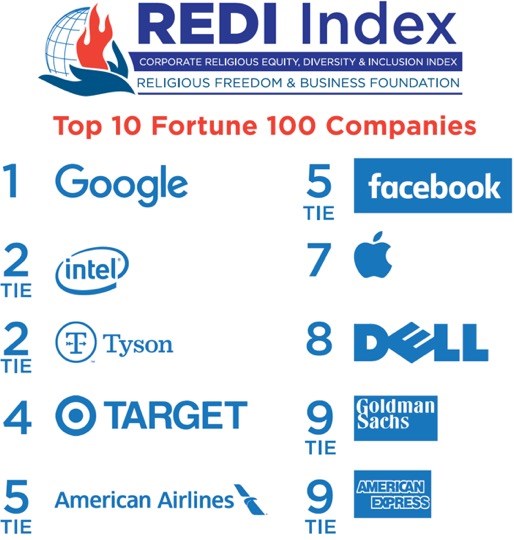 While some companies will sanction similar groups as part of diversity efforts, Jeff Haanen of the Denver Institute for Faith and Work cautions that people of faith should not equate them with a faith-friendly workplace.

“It’s a good trend to see this happening, especially in large corporations. It can be an aspect of faith in the workplace,” Haanen said, particularly when ERGs allow Christians to learn more about the convictions of their co-workers.

But Christians underestimate the impact their faith can have in the workplace if they compartmentalize their core beliefs into a designated faith group.

“Don’t think an ERG is the only place to express your faith in your workplace. You express your faith through every context at work. The values of a corporation are ultimately a religious, philosophical worldview,” he said. “But as a believer, Christ is Lord of all things and he is renewing all things.”

RFBF’s analysis shows that 57 of the Fortune 100 companies make no mention of religion or faith on their landing pages, and of the 43 that do, about half only make a single mention, sometimes only as a part of a boilerplate nondiscrimination statement.

Leaders may fear that launching faith groups could lead to evangelization in the workplace or bring forth conflicting religious beliefs and convictions around marriage and sexuality.

But corporations who use this model say it can improve bridge-building among employees. Target, whose 2016 transgender-friendly bathroom policy caused outrage among some conservative Christians, now boasts joint efforts between its Christian ERG and its Pride+ Business Council for LGBT employees.

Bradley McCoy, sales director for Target’s digital advertising business Roundel, said that the 2018 Empathy Project brings them together for monthly conversations “to build understanding, break down stereotypes and (of course) build empathy.”

Johnson at RFBF hopes the REDI Index will embolden Christian employees to ask for faith-based ERGs at their companies. The foundation said PayPal and Walmart announced plans last year to launch their own interfaith ERGs for the first time.