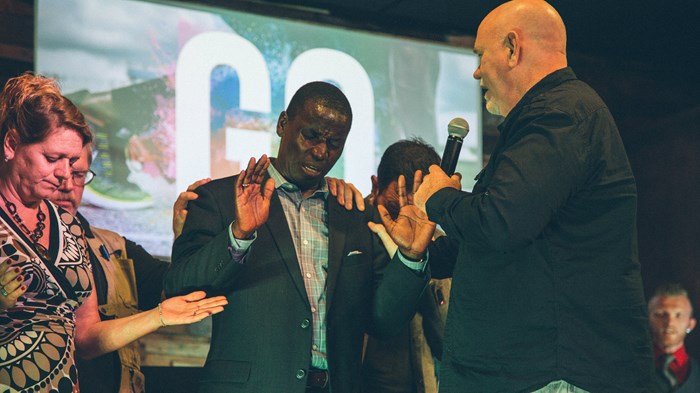 Most Ugandans assume Southern Baptist missionary George Smith is one of them. They talk to him and his wife Geraldine, who are African American, like they’re talking to one another, they said.

Anglo missionaries, on the other hand, tend to be “a spectacle,” said Smith. “They draw a crowd.”

Through 20 years of ministry in Africa with the Southern Baptist Convention’s International Mission Board (IMB), blending in with locals has afforded the Smiths distinct ministry advantages—from freedom to call local believers “on the carpet” in sermons, as Smith puts it, to an opportunity to live with Africans as peers.

Back in the United States, IMB leaders also have recognized the strategic advantage of sending black missionaries around the world. They’re making a concerted push to send more African Americans—not only for the sake of missions strategy, but also to align the percentage of black IMB missionaries with the percentage of black church members in the Southern Baptist Convention (SBC), which includes nearly 4,000 predominantly African American churches.

At this point, it’s going to be a stark challenge. Of approximately 3,700 career missionaries serving with IMB at the end of last year, just 13 (0.3%) were African American, according to the IMB’s 2020 ministry report. For the percentage of black missionaries to approach the percentage of black church members in the SBC overall—6 percent, according to Pew Research—nearly half of the 500 new missionary slots the IMB aims to create over the next five years would have to be filled by African Americans.

Observers within and outside the SBC are hopeful, though they wonder if the IMB’s black missionary recruitment effort will include sufficient money and commitment to make a meaningful difference.

“It’s a bit too early to tell” if the IMB is serious about mobilizing African Americans, Smith said.

Last month, the IMB announced the hiring of Jason Thomas as a full-time African American church mobilization strategist. Thomas told Christianity Today he’s aiming for 75 black IMB missionaries by 2025—about six times as many as there are now. He plans to recruit by visiting churches, attending conferences and meetings, partnering with seminaries, and working closely with the SBC’s National African American Fellowship (NAAF).

“All Christians are called to fulfill the Great Commission,” Thomas said. “To do that, we must send missionaries from all ethne,” all races and nations.

“African Americans who have served through IMB have made a tremendous contribution to getting the gospel to the nations, so we want to see more and more African Americans on the mission field,” IMB President Paul Chitwood told CT.

The number of black Southern Baptist missionaries has never been high, but the IMB’s latest push comes amid a mild ebb of African Americans on the field. In 1999, there were 19 black IMB missionaries, 0.4 percent of the total SBC international missionary force. The number increased to 27 (0.6%) in 2013 before falling again to current levels.

NAAF President Marshal Ausberry cited SBC history as a factor in the recent shortage of African American missionaries. Because the denomination was founded in 1845 to retain the right of missionaries to own slaves, racism “seeped into policies,” he said. The era of Jim Crow also inhibited black participation in SBC missions, so black Baptists sometimes engaged in mission work apart from the SBC. Efforts over the past four decades to make the SBC’s racial composition “reflect the kingdom of God” have yet to fully overcome the convention’s history.

More recently, the IMB didn’t immediately replace its staff liaison to black churches after he retired some five years ago. When the agency downsized its missionary force in late 2015 and early 2016 for financial reasons, some claimed the downsizing disproportionately, through unintentionally, affected African Americans. (Black recruitment waned in recent years, the argument went, and few young African American missionaries were being sent to replace their older peers.)

The SBC Executive Committee asked about that issue in 2016, and the IMB responded that its voluntary retirement incentive “did not have a significant impact on the number, balance, and ratio of African Americans” serving on the field.

Doug Logan, president of Grimké Seminary in Richmond, Virginia, said that aside from “all-stars” like Liele and Lott Cary, a 19th-century missions pioneer in Liberia, there have been few African American international missionaries.

“African American churches post-Emancipation have struggled just to be the church in their own neighborhood and communities in the states amidst racism and segregation, often lacking sufficient funds for day-to-day ministry,” he said. “So global missions would likely take a back seat to ministry and people right in front of them.”

Among Southern Baptists, home missions has seen heavier involvement by ethnic minorities, including African Americans. In 2018, 62 percent of the 624 churches planted by the North American Mission Board (NAMB) were non-Anglo, including 7 percent that were African American, according to NAMB’s 2020 ministry report.

In addition, black Christians historically have been segregated from seminaries, white mission agencies, and some denominations with a focus on world missions.

Despite efforts to organize African American mission work to Africa in the 19th and 20th centuries, the number of black missionaries remained small, according to Process, a blog run by the Organization of American Historians. Between 1820 and 1980, just 600 of the 30,000 American missionaries in Africa were black.

Yet fulfilling the Great Commission requires “every race in the game,” Logan said. Missionaries of color often gain a hearing in countries where Anglo missionaries are inhibited by the “history problem” of white colonialism and racism. A diverse mission force also “shows off this melting-pot gospel” that brings people of every ethnicity into the body of Christ.

For the SBC, there seems to be hope of achieving that goal. Other ethnic groups already have been mobilized beyond the levels of African Americans. Though Asians comprise less than 1 percent of Southern Baptists according to Pew, 222 Asian Americans represent 6 percent of the IMB’s missionary force. Additionally, “God is opening an increasing number of pathways for Hispanic brothers and sisters to take the gospel to Muslim contexts,” the IMB stated in this year’s ministry report.

Ausberry, of NAAF, believes only the “hand of God” could lead the SBC from its racist beginnings to the election Fred Luter as its first black president in 2012. Not only did his election break down a color barrier in the SBC, but he used his platform as president to urge more African Americans to consider the mission field.

Following a mission trip, Luter told fellow African American church leaders, “I regretted, pastors, that I didn’t do this a lot sooner … Don’t let it take you to be elected president of the Southern Baptist Convention to go to the mission field.”

Chitwood, who took the IMB’s helm in 2018, is building on that momentum, said Ausberry, the SBC’s first vice president. “He has fresh eyes and a global perspective. The opportunities look great moving ahead.”

In Uganda, the Smiths are hopeful but realistic. In their 60s and likely within two years of retirement, they know just 11 black missionaries will remain on the field when they depart if no one else is mobilized.

Southern Baptists Have Only 13 African American ...