(UPDATED) Orthodox leaders and UNESCO object to famous former church no longer being a museum.
Jayson Casper and the Associated Press|July 10, 2020 11:32 AM 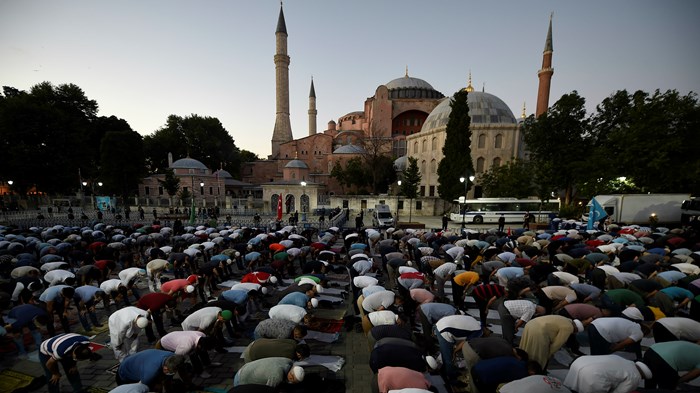 Image: AP file photo
Muslims offer evening prayers outside the Byzantine-era Hagia Sophia, one of Istanbul's main tourist attractions, following the decision to reconvert it into a mosque on July 10.

As Christians feared and many expected, the Hagia Sophia is now—again—a mosque.

The Turkish Council of State ruled today that the original 1934 decision to convert the sixth-century Byzantine basilica into a museum was illegal.

In a televised address to the nation, Erdoğan said the first prayers inside the Hagia Sophia would be held on July 24, and he urged respect for the decision.

“I underline that we will open Hagia Sophia to worship as a mosque by preserving its character of humanity’s common cultural heritage,” he said, adding: “It is Turkey’s sovereign right to decide for which purpose Hagia Sophia will be used.”

Istanbul-based Ecumenical Patriarch Bartholomew I, considered the spiritual leader of the world’s Orthodox Christians, warned in late June that the building’s conversion into a mosque “will turn millions of Christians across the world against Islam.”

And UNESCO reminded Turkey of its international obligations, as the Hagia Sophia is registered as a World Heritage site.

“A state must make sure that no modification undermines the outstanding universal value of a site listed on its territory,” the UN body stated.

In response to the Turkish decision, the Russian Orthodox Church expressed regret, stating it could lead to “greater divisions.”

The foreign minister of Cyprus called it a “flagrant violation” against “a universal symbol of the Orthodox faith.”

And in Greece’s second-largest city, Thessaloniki, protesters gathered outside a church that is modeled on the Hagia Sophia and bears the same name. They chanted, “We’ll light candles in Hagia Sophia!” and held Greek flags and Byzantine banners.

The official conversion could take place as early as July 15, as Erdoğan marked that day for prayers in commemoration of a failed coup against him in 2016.

And during his address, he rejected the idea that the decision ends the Hagia Sophia’s status as a structure that brings faiths together.

“Like all of our other mosques, the doors of Hagia Sophia will be open to all, locals or foreigners, Muslims and non-Muslims,” Erdoğan said.

Dozens stood outside the Hagia Sophia, cheering in celebration.

A poll conducted in June showed a divided population: 47 percent favored Hagia Sophia being opened to Muslim worship, while 39 percent said it should remain a museum.

And similar to the desire of Armenian Patriarch Sahak II, resident in Istanbul, 13 percent said it should be open for all religions to worship.

However, an ethnic Armenian member of Turkey’s parliament tweeted that it was “a sad day for Christians [and] for all who believe in a pluralist Turkey.”

“The decision to convert Hagia Sophia into a mosque will make life more difficult for Christians here, and for Muslims in Europe,” wrote Garo Paylan. “Hagia Sophia was a symbol of our rich history. Its dome was big enough for all.”

CT’s previous report is below: