The tour, held in defiance of COVID-19 regulations, continues in Colorado, Minneapolis, and Kenosha, Wisconsin, in the week ahead.
Julia Duin – Religion News Service|September 9, 2020 09:17 AM 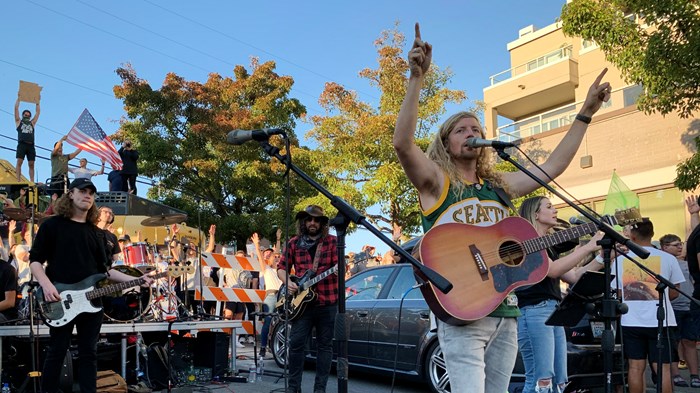 A battle of wills between a California musician known for a series of open-air Christian worship concerts around the country and the city of Seattle, which denied him a park venue for a Labor Day concert, ended with a two-hour “worship protest” being held one block north of the park.

A group of local pastors located an alternate site on a blocked-off portion of Meridian Avenue North only hours before the 6 p.m. concert was set to begin. They got permission to hold the rally with the proviso that it be called a “worship protest.”

Sean Feucht, 37, the rally organizer, laughed about the conflict with city officials while welcoming the crowd of 800 to 900 people.

“Welcome to Seattle’s largest worship protest,” he said at the beginning of a two-hour set. “Turn to each other and say, ‘Welcome to the protest.’ In this city, that makes it a legal gathering.”

Feucht had originally planned to hold a sunset concert at the picturesque 20-acre Gas Works Park on Seattle’s Lake Union. The concert was part of the #LetUsWorship movement, a series of protests against COVID-19 bans on singing and large group meetings in churches.

The governor has allowed outdoor worship gatherings of up to 200 people as long as masks are worn even while singing, people stay 6 feet apart, and there are no choirs or musical performances involving more than two people.

Feucht’s concerts, which have drawn thousands of spectators and worshippers at 21 gatherings around the country, ignore all those guidelines.

The events, a mix of Christian concert, healing service, guerrilla street theater and spectator mosh pit, feature the kind of public singing forbidden under many COVID-19 regulations. Earlier this summer, Bethel Church in Redding, California, where Feucht is a volunteer worship leader, issued a statement expressing concerns after an event in that city. The church had been concerned about the event and had been assured that a plan with COVID-19 precautions was in place.

“We agree that the plan did not get implemented to the level it needed to be at this gathering, and that is something that should’ve been addressed more seriously,” the statement said.

No one in Feucht’s five-piece band, nor his three female vocalists or a six-man video team, was seen wearing masks at his two Seattle concerts, where spectators were packed close together, making social distancing impossible.

On Friday, the city decided to shorten Labor Day hours at 16 of the city’s parks and to shut down Gas Works totally for the entire day. Although the city didn’t give a reason for the total closure, local media pointed to Feucht’s rally as the reason.

City workers erected a 6-foot fence for several blocks around the park, complete with large red signs announcing the closure.

“We want to come and bless this city,” Feucht told reporters before Monday’s concert. “We’ve not had one COVID case tracked back to our concerts. This is about blatant discrimination against Christians. They’re not doing this with other demonstrators.”

It was all, he said to the crowd minutes later, about the freedom to worship.

“Politicians can write press releases, they can make up threats, they can shut down parks, they can put up fences,” he said. “But they can’t stop the church of Christ from worshipping the one true God. We are here as citizens of America and of the kingdom of God and we will not be silenced.”

The hastily arranged set-up at a construction site on the dead-end street across from the park proved ideal for a concert. Flanked by a marine supply store on one side, an apartment complex on the other and a huge yellow bulldozer in the back of the set, the street and adjoining parking lot provided more than enough space for hundreds of worshippers to gather, sing and dance.

“We’re here as a peaceful protest,” said Megan Delahunty, 28, of Seattle. “They’re trying to shut down churches and in California, they’ve even banned singing (in churches).” In July, three organizations sued California over this ban.

“It’s obvious what their intent is,” she continued. “As goes California, so goes the world. There’s no reason to be silent. We’ve been silent for too long.”

Unlike the CHOP gathering, which attracted dozens of protesters who tried shouting down the concert, poured super glue onto one of the musicians’ keyboards and tried cutting off power to the concert generators, there were almost no naysayers at Monday’s concert.

Jade, 38, a man who refused to give his last name and who identified himself as a gay “nonaffiliated” Christian, brought a pack of 50 masks and tried passing them out to the crowd. As of a half-hour before the start, no one had taken any. “Passersby seemed to think God would keep them safe,” he said. “But I’ve seen a lot of hugging go on. This is a big deal for me.”

But Trevor, 42, a homeless man living in Gas Works Park who also would not give his last name, sided with Feucht’s crowd. “I think it’s horrible that people went to pray and the park got shut down,” he said. “People come here all day and drink, and no one shuts them down. And for the most part, people don’t wear masks here.”

The concert, which was livestreamed on multiple platforms, was about 90 minutes of singing and a half-hour of preaching and taking the offering. Feucht, who was dressed in a green-and-yellow Seattle SuperSonics jersey, beige cutoffs, and Birkenstocks, didn’t reveal how much it is costing him to mount nightly concerts in several dozen cities around the country before the November election.

But he did say a $50,000 check paid for the prior night’s open-air concert on the steps of the California state Capitol in Sacramento. That event, for which Feucht had a permit, attracted thousands in searing temperatures to hear him.

Feucht got the idea for the worship events in the spring, after a failed campaign for Congress.

Unhappy about losing the primary election, Feucht said, he was casting about for another purpose in life when COVID-19 hit the country and California began sanctioning worship meetings of all kinds.

In early July, after California Gov. Gavin Newsom had just laid more restrictions on churches, Feucht said he had to stand up to it all. He organized an impromptu July 9 concert on San Francisco’s Golden Gate Bridge that attracted 400 people for a worship service.

Feucht tried staging a second event, in San Diego, and it attracted 5,000. He knew he was onto something.

“So we declared a new Jesus movement,” he said on a recent podcast with lifestyle supplement entrepreneur David Harris Jr. “We feel this call to target cities under extreme turmoil, despair and brokenness. That’s why we’ve gone into downtown Portland a block from the riots; we’ve gone into CHOP in Seattle. God’s really writing a different story there. There’s a lot of people wanting to experience God in these cities.”

On Friday, Feucht and his team will head on the road for 14 more rallies, starting in Fort Collins, Colorado, and followed by concerts in Colorado Springs, Minneapolis and, on September 16, Kenosha, Wisconsin, site of recent riots involving the police shooting of 29-year-old Jacob Blake, a black man.

Feucht’s last rally will be on October 25 on the Mall in Washington, D.C.

Feucht isn’t saying what he intends to do after the presidential election, choosing instead to stage as many concerts as possible as long as the weather holds out across the country. Near the end of Monday night’s concert, he called up two police officers and had the crowd pray for them.

“We’ve seen people saved, healed, baptized and it’s probably a long time since the police have felt encouraged,” he said. “There’s a lot to celebrate tonight.”