Evangelical, Orthodox, and academic sources weigh security concerns against the right to associate with historic patriarchate losing popularity and suspected of war collaboration.
Jayson Casper|December 21, 2022 10:50 AM 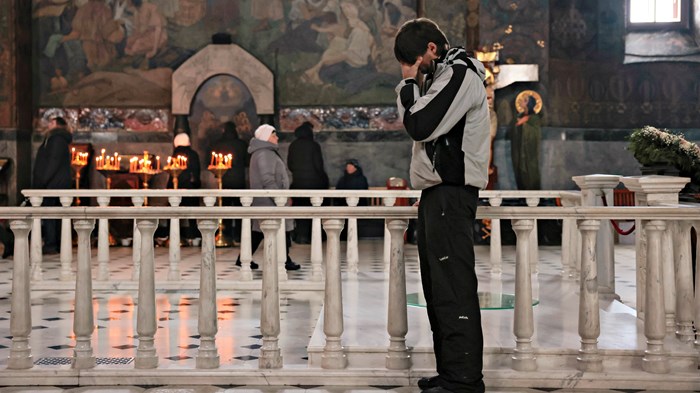 Ukraine, a bastion of religious freedom, is moving to possibly outlaw a church.

President Volodymyr Zelensky began the month by endorsing a draft law to “make it impossible” for the Ukrainian Orthodox Church (UOC), canonically linked to Moscow, to operate. His December 1 decree followed raids on several monasteries under the UOC’s jurisdiction.

“We will ensure complete independence for our state. In particular, spiritual independence,” stated Zelensky. “We will never allow anyone to build an empire inside the Ukrainian soul.”

The reaction from Russia was swift—but also illustrated the issue.

Kremlin spokesman Dmitry Peskov, however, was more specific, accusing Ukraine of “waging a war on the Russian Orthodox Church” (ROC).

His comment prompted a UOC spokesman to assert his church is not Russian.

The raids—centered on the 11th-century Kyiv-Pechersk Lavra complex, known as the Monastery of the Caves—uncovered large amounts of cash, “dubious” Russian citizens, and leaflets calling on people to join the Russian army, according to Ukrainian authorities. Other material cited as evidence included prayer texts of ROC patriarch Kirill and a video of hymn singing that celebrated Russia’s “awakening.”

Kirill has publicly blessed Russia’s invasion of its neighboring nation, even promising forgiveness of sin to soldiers who die in the war. Security services also described finding UOC priests in possession of literature denying Ukraine’s right to exist and contacting Russian intelligence agents.

Sanctions were announced on at least 10 UOC members, including the governor of Kyiv-Pechersk Lavra, a UNESCO heritage site. Another, the archbishop of the Kirovohrad diocese, was accused of subversive activities.

Zelensky stated the government would examine the Lavra’s jurisdiction.

Since then, sanctions have followed on seven additional members, while the UOC stated that local authorities have issued over 70 orders to ban its activities.

In 2019, the newer Orthodox Church of Ukraine (OCU) was formed from a merger of two breakaway jurisdictions from the ROC, after which it was declared an autocephalous (independent) body by Ecumenical Patriarch Bartholomew I of Constantinople.

The new church was rejected by Moscow and accepted by Greece and other national churches, while some in the Orthodox world stayed neutral. The UOC, meanwhile, continued under the leadership of the Moscow patriarchate.

Russia’s invasion in February 2022, however, placed the UOC in a bind. Although it is the largest church in Ukraine with about 12,000 parishes, polls indicate it now receives the support of only 4 percent of the population. As a further sign of its decline in favor, only 13 percent of Ukrainian citizens of Russian ethnicity support the church.

In May, Metropolitan Onufriy, head of the UOC, declared its parishes were no longer subordinate to the ROC, though he maintained Eucharistic communion with Moscow. By then, 387 parishes had already transferred allegiance to the OCU.

Onufriy has consistently spoken out against the war, and last month he deposed three top bishops, two of whom fled to Russia. And following the raids he declared support to UOC chaplains in the Ukrainian army, while the Holy Synod—speaking from the Lavra—reiterated that the church “consistently stands for the preservation of the sovereignty, independence, and territorial integrity of Ukraine.”

After the draft law’s disclosure this month, Ukraine dismissed Elena Bogdan, state official for ethnopolitics and freedom of conscience, reportedly for her opposition to banning the UOC. She had previously confirmed Onufriy’s statement that the church was no longer governed by the ROC.

Zelensky’s decree tasked her office with the determination of UOC’s continuing ties with the Moscow Patriarchate.

“Increasingly as the war grinds on and winter advances, the weaponization of religion will continue,” said Catherine Wanner, professor of history, anthropology, and religious studies at Penn State University. “All of these dynamics conspire to clamp down on the potential—if not actual—use of this church as a portal for the Russian World ideology.”

Promoting Russian cultural influence outside its borders, such ideology has been supported by Kirill and used by Moscow to politically engage on behalf of Russian speakers in other nations. Ukrainian officials stated that materials found in the Lavra integrated this teaching into seminary and parish school curriculum.

The ROC viewed the raid as an attack on its heritage.

“The Ukrainian leadership are prepared to act against their own population, and the most defenseless and unobjecting kind at that," stated spokesperson Vladimir Legoyda. “Ordinary believers and the humble, honest priests of the Ukrainian Orthodox Church, whose sole blame is their keeping the faith of their fathers.”

And many wish to honor this heritage.

“We have certain relations with Russia, and it’s painful for us what is going on now,” stated Ioan, a UOC priest in the Lavra, following the raids. “The most important is that the war is over … for the guilty to be punished, and for us to live in peace.”

Announcing the measures, Zelensky stressed Ukraine’s commitment to religious freedom. At the same time, a new legal entity was created to register the Lavra as a monastery within the OCU, without changing the status of the complex pending further investigations.

“Silencing and arresting Orthodox clergy as ‘dissenters’ and ‘traitors’ ought to wake up America to the corrupt, fascist regime in Ukraine,” he said. “Zelensky and his cabal are no less brutal tyrants than Putin and his government.”

Webster’s institution is under the jurisdiction of the Russian Orthodox Church Outside of Russia, and he laments the “shameful internal disagreements”—led by Bartholomew and backed by the West—that may permanently splinter the Orthodox world.

Wanner noted that the UOC was the final holdout of religious unity between Russia and Ukraine. Author of Communities of the Converted: Ukrainians and Global Evangelism, she stated that Protestant, Muslim, and other believers in the two countries have already broken communion.

“This is the last shoe to drop,” she said.

Maksym Vasin, executive director of the Ukrainian Institute for Religious Freedom, headquartered in Kyiv, provided commentary to CT, stating it is too soon to assess the implications.

“After a significant public outcry in Ukraine and public accusations against clergymen of the UOC (affiliated with the Moscow Patriarchate) of high treason and collaboration in favor of Russia as an aggressor state, the Security Service of Ukraine has started to inspect the UOC-MP activities considering its connections with the Russian Orthodox Church which is engaged with the Kremlin,” he said.

“However, at this moment, it is too early to estimate the possible legal consequences for the UOC-MP, while the investigation is in process. At the same time, the Ukrainian parliament is still discussing various legislative initiatives which can affect the UOC-MP and other denominations in general. In the meanwhile, the State Service for Ethnopolitics and Freedom of Conscience recently appointed a new chief.”

"We see a full-fledged ideological war of Ukraine against Russia,” stated Sergey Melnikov, chairman of the Russian Association for the Protection of Religious Freedom. “The Ukrainian authorities stop at nothing and violate fundamental human rights, including the right to freedom of religion.”

Ruslan Maliuta, the Ukrainian cofounder of the World Without Orphans alliance and taskforce leader for the World Evangelical Alliance’s coordination of relief for Ukraine, referenced recent church history. The UOC structure dates back to the time of the Soviet Union, when the church was under full government control. After independence, it maintained strong ties with the ROC, which critics say became co-opted by Putin.

Today, there is no evidence the Ukrainian government has suppressed any church, he said. The current investigation is simply a matter of national security, examining the potential involvement of clergy in supporting aggression against their own country.

“The government should have probably investigated this much earlier,” said Maliuta. “But there is no doubt that many, if not most, believers in the UOC are Ukrainian patriots.”

Mark Elliott, editor emeritus of East-West Church and Ministry Report, recognized both the risk to religious freedom and the danger of ROC soft power. But there is no “concrete evidence,” he said, that Onufriy himself is guilty.

“An outright ban on the UOC would not be in the interest of Ukraine,” Elliott, a former history professor at Asbury University and Wheaton College, said. “But neither, obviously, would it be to forgo security measures against Russian collaborators in their ranks.”

To protect the freedom of conscience of all citizens, he recommended that before the parliamentary vote, the draft law should be submitted for review to the European Court of Human Rights. In addition, evidence against the UOC clerics should be shared with Orthodox leaders outside Ukraine for evaluation.

To help mediate between the UOC, the OCU, and the state, Elliott suggested the Orthodox archbishop of Albania and patriarch of Jerusalem, both of whom have remained neutral in the byzantine conflict between Bartholomew and Kirill.

Until then, the jury is out on religious freedom’s future in Ukraine—as the war rages on.

“It is too early to tell,” said Wanner. “The goal is to end this punishing war, so we encourage the use of nonviolent means.”

Will Ukraine’s Threatened Ban on Russia-Linked ...