Many of us think fondly of that dismal, old grey donkey Eeyore in the Winnie-the-Pooh children's books by A.A. Milne. While lovable and secretly goodhearted, he is usually gloomy and negative, always expecting the worst.

During my twenty-five years as a pastor, I've met many people like that. They never accept responsibility because they're certain they'll fail. Or, they serve "faithfully" in the church, but gloomily imagine critics in every pew and corner.

Picture for a moment the person who "never receives enough attention," never initiates friendships, and assumes the church is really run by an inner circle where he or she will never be welcomed. Would you agree that person often sounds like Eeyore in this conversation with Rabbit?

^ "Nobody tells me, " said Eeyore, "nobody keeps me Informed. I make it seventeen days come Friday since : anybody spoke to me."

Video
Tom Nelson and David Greusel: Q & A - Being Conversant vs. Being Fluent
Being a good question-asker is key to understanding people's hearts.
Trending 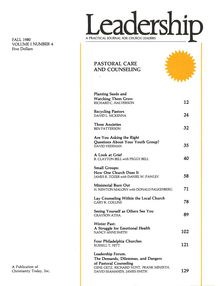 This article is from the Fall  1980 print issue of Leadership Journal. Subscribe to continue reading.