Saturday, September 5, 1964. I was to conduct a wedding that afternoon, so I retired to my study to arrange final details for it, and to complete preparation for the following day's ministry at Charlotte Baptist Chapel.

Suddenly as I was writing, I lost control of my hand. It wandered all over the paper. I called out to my wife; but in a few moments I had lost my speech, my right side was paralyzed, and I found myself unable to walk. I was put to bed, and the doctor was called immediately.

I had little doubt as to what had happened, and he confirmed the verdict. It was a cerebral hemorrhage. A main artery taking blood to the brain had snapped. He said I was a "very lucky man," because the hemorrhage had stopped just in time. Had it gone a fraction further it would have proved fatal. He suggested that I should forget any work, and take life gently. If I were prepared to do this, he told me, I could expect to live until I was ninety. If, however, I insisted on going back into harness, he thought ...

Discipleship
When Your Friend is Dying
How to help when your only gift is eternal hope.
Betsy Burnham
Trending 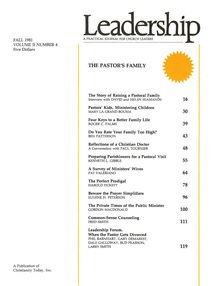 This article is from the Fall  1981 print issue of Leadership Journal. Subscribe to continue reading.