My missionary career in Japan began with less than two years of language school in Tokyo. I was then assigned to the large city of Fukuoka on the southwest island of Kyushu. My principal assignment was student evangelism, but soon I began to pick up other responsibilities.

One was the exciting but formidable task of teaching three Bible classes in the local prison, an equivalent of our state penitentiaries. I was asked to do this for a year by a veteran missionary who was about to leave on furlough. Only as I approached the first session in the fall did it begin to dawn on me that I might have bitten off more than I could chew. My predecessor had been born in Japan and knew well both the Japanese language and culture. I could barely carry on a simple conversation. I had a miniscule biblical and theological vocabulary in Japanese, and could not even give a simple testimony with any fluency. Yet I was going to conduct Bible classes in Japanese with three groups of prisoners, most of whom ...

SERMONS FOR HEAD AND HEART
Effective preaching feeds both the mind and the emotions.
Bruce W. Thielemann
Trending 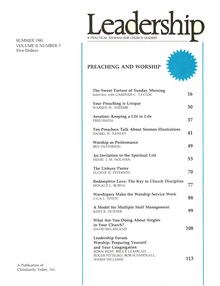