One man's experience of the first few years after seminary--mortification and edification.
David Epps

My name doesn't appear on the church stationery, nor does it appear in the newspaper or telephone book advertisements. I'm not in the limelight. No one refers to the church I serve as "Brother Epps' Church," and few in the congregation look to me for spiritual guidance. I'm the "silent partner," the "second in command." I am simply an associate pastor to a more mature minister who pastors a growing and thriving local assembly. And I wouldn't have it any other way!

Six years ago, armed with a college degree, I assumed the pastorate of a church consisting of 110 members, although there were only fourteen who attended regularly. Full of idealism and zeal, I mounted the pulpit with the certain knowledge that I was going to instruct these poor, neglected folk in the deeper mysteries of God. When I ran out of sermon material inside of six weeks, I began to sense that all was not going well.

I demonstrated my profound wisdom time and time again, as I attempted to minister to the needs of the people. ...

Clearing Your Vision
The most compelling reason I have for going away to pray is to find what God is saying to our congregation in the context of the larger church.
Joel C. Hunter
Trending 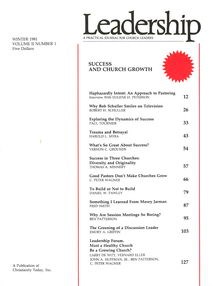 This article is from the Winter  1981 print issue of Leadership Journal. Subscribe to continue reading.