Names and identifications in the case examples have been changed.

Shaping a family with children and adults from previous families is a bit like building a car out of spare parts, only harder. It can be done, but not without a great deal of persistence, creativity, and help. The following article illustrates the obstacles and gives steps couples can take to overcome them.

Mark and Rita Cunningham, both divorcees living in Portland, Oregon, married eight years ago. Between them, they had seven children to think about: she a tenth grader, he a ninth grader, she an eighth grader, he a seventh grader, she a fourth grader, he a third grader, and she a pre-schooler. Mark is an aw-shucks kind of man who loves children and, according to Rita, "could have four blended families and it wouldn't bother him."

When he was divorced, his son, Paul, was a freshman in high school, just starting to play football, and very close to his father. So Paul came along with Mark, while the mother kept custody of the ...

END_OF_DOCUMENT_TOKEN_TO_BE_REPLACED
Already a subscriber? Log in
Read These Next 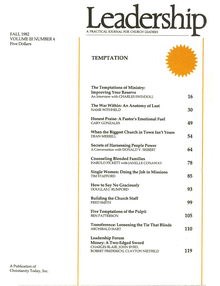