What was once unthinkable is becoming more frequent. Why? And how can it be forestalled?
Roy C. Price

1. A seminary graduate, eager to do well, finds himself ejected from a pastorate after two years. His next job: driving a milk truck.

The major conflict had been between him and a prominent layman who held a high denominational position, the de facto leader of the church. "It had to do with philosophy of ministry and openness to new ideas," says the former pastor. "Younger families wanted some contemporary music, and he said my generation didn't know what good music was.

"The conversation got to the point where he said I was the most stubborn person he had ever seen. I told him I thought he fit the description. 'Well, you wouldn't respect me if I weren't,' he said. I replied I hoped it was reciprocal."

Other confrontations centered around whether this new congregation should have a full traditional program. The pastor was more interested in doing things to reach the community than in attending all the business sessions of the national conference. In fact, he had even left a district conference ...

Discipleship
How I Upgraded My Premarital Counseling
These are the most helpful tools I've come up with after working with couples for 30 years.
Richard E. Sweeney
Trending 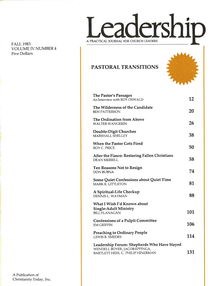