When Dr. Steven Rosenberg stepped to the podium at Bethesda Naval Hospital and announced, "The President has cancer," the relationship between Ronald Reagan and the American public shifted. The symbol of American strength now seemed weak, vulnerable, subject to alien invasion. People wondered, Can he continue to lead?

What happens when leaders fall weak and seem unable to lead? I have wondered about this since cancer struck me-and my ministry. What happens when those called to minister to the needs of others suddenly find their own needs overwhelming?

My first brush with cancer was in 1972, an occurrence of lymphoma. A lump was removed, and I was given radiation treatments to assure me of no further threat. I had left that in my past.

Until then, the year ahead had looked bright. My ministry was going well. A long-cherished sabbatical awaited in the winter months. We had recently hired a new associate whose creativity and commitment indicated great ...

Straight Answers in a Crooked Age
The quest for intellectual integrity in Christian leadership has a ways to go.
Fred Smith
Trending 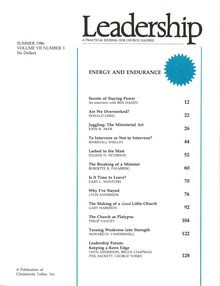