Pam was a straight-A student, president of the church youth group, and a top competitor in state track.

Just a year before graduation, however, her parents found her dead in the car, the exhaust pipe stuffed with rags.

Pam's bewildering actions illustrate a raging American epidemic: suicide. The problem is increasing especially among teenagers. For those fifteen to nineteen years old, suicide is the second leading cause of death; since 1955, it has increased 300 percent. Even more alarming is the number of children younger than fifteen who kill themselves. In 1950, forty committed suicide; in 1985, three hundred did.

One week after delivering a sermon on hope in a world of growing despair, Herbert W. Chilstrom, bishop of the Minnesota Synod for the Lutheran Church in America, found a family member had lost all hope. His son Andrew, eighteen, shot himself to death.

Suicide grimly reminds us all is not well in the world, and this is where a pastor has much to offer-hope and meaning for those ... 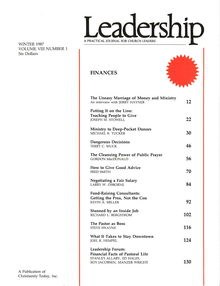