Percentage of women who chose an abortion because having a baby "would change their life (job, school)": 76

Who chose an abortion because of rape or incest: 1

Percentage of Americans involved in charity or social service activities, in 1977: 27

Percentage of Americans who say they strongly object to working with people who have aids: 34

Who strongly object to working with people who don't use deodorant: 38

Percentage of marriages today that are remarriages for one or both partners: 46

Average number of dollars, per capita, spent on lottery tickets each year, in the top ten lottery states: $135

Percentage of mothers who said they wanted their children to develop a loyalty to church, in 1924: 50

Percentage of middle-level executives who spend 50 or more hours per week on their jobs: 77

Percentage of Americans who say watching TV is their favorite way ... 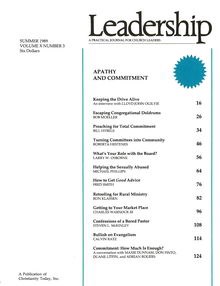 This article is from the Summer  1989 print issue of Leadership Journal. Subscribe to continue reading.