It has been a decade since that day in Florida when Muriel, my wife, repeated to the couple vacationing with us the story she had told just five minutes earlier. Funny, I thought, that's never happened before. But it began to happen occasionally.

Three years later, when Muriel was hospitalized for tests on her heart, a young doctor called me aside: "You may need to think about the possibility of Alzheimer's." I was incredulous. Young doctors are so presumptuous-and insensitive.

Muriel, for the most part, was doing the same things she had always done. True, we had stopped entertaining in our home-no small loss for the president of a seminary and Bible college. She was a great cook and hostess, but she was having increased difficulty planning menus. Family meals she could handle, but with guests we could not risk missing a salad and dessert.

And, yes, she was having uncommon difficulty painting a portrait of me, which the college and seminary board, impressed by her earlier splendid portrait ... 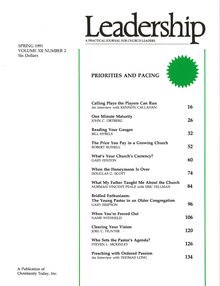