A few months after I retired, I stood by my mailbox talking with a neighbor. He'd had a problem with alcohol once but hadn't taken a drink for years.

That's a strange analogy, I thought. Does he think I'm struggling every day with a compulsion to preach sermons, pray at public gatherings, and attend committee meetings?

I had a better analogy. I considered myself a minister the same way that I was a soldier when I was young. I wasn't a hero, but neither did I disgrace myself. Being in the army was something I was called to do. I did it as well as I could.

But I never became a soldier. It didn't define who I was. Soldiers were the thirty-year professionals who had no life outside the army. I was a civilian who did a soldier's job. When the job was over, I went on to something ...

Outreach
How can lay people help prevent burnout in pastors and staff?
Joe N. McKeever is director of missions with the Baptist Association of Greater New Orleans
Joe McKeever
Trending 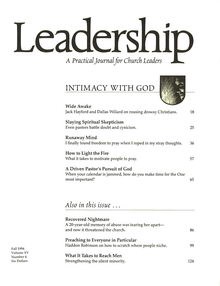