Terror seized me by the throat a few months into my engagement to be married. fundamental realization: If I had this woman, I couldn't have any of the others. If I said "yes" to one, I was saying "no" to millions. Not that this was the breadth of my options, mind you--but whatever options I might have had before I said my vows, they were no more after I said them.

I gingerly raised some of these concerns with the woman who nevertheless became my wife. That was twenty-three years ago. She's forgiven me, I think.

Every yes contains a no. And if you can't learn to say one, you won't learn to say the other. (Maybe that's why we put up with 2-year olds.) It certainly describes the way Christians and churches can drift off into heresy and confusion.

I know of a church whose new pastor has led it into serious, even fatal, theological error. The mystery is that his predecessor, a thoroughly orthodox, godly and beloved man, had pastored the church for more than three decades and had never preached ...

The Subversive Shepherd
Why and how to return to the hard work of making saints.
Eugene Peterson
Trending 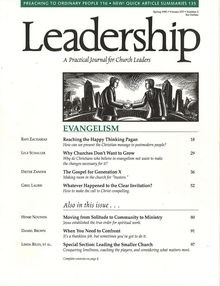