It was 1954. My letter appeared in the Richmond, Virginia, morning newspaper decrying the recent Supreme Court decision ending "separate but equal" schools. I wanted to be with my own kind; Negroes felt the same way, I said confidently.

It was 1979. My wife and I joined the NAACP-sponsored march down the main street of the capital city of South Carolina. We stood before the capitol, which flew the Confederate flag alongside the national and state flags. "Why are you here?" a reporter asked, noting that only a few whites had joined the march. "We're here because we support the NAACP in its quest for racial justice in our country," I responded.

It was March 2000. At Ozark Christian College, where I currently serve as librarian, we had just completed our third annual Racial Reconciliation Week. I, along with faculty colleagues, had helped produce James Weldon Johnson's "God's Trombones" and a dramatic presentation of Bishop Joseph Johnson's magnificent vision of Revelation 7:9, as recorded ...

Join the conversation on Facebook
Tags:
Fellowship and CommunityPastorsRacismReconciliationSocial Justice
From Issue:Fall 2000: The Pastor's Changing RoleOctober 1, 2000 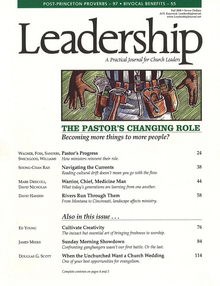 This article is from the Fall  2000 print issue of Leadership Journal. Subscribe to continue reading.