Getting What We Don't Deserve

It was the first night of camp, and a group of tough kids from the city had hardly unpacked when the leaders received word about a theft. A work crew kid was missing a wallet, $35, and a watch. The next morning, Kirk, the intern from the city, found the empty wallet in his cabin. He immediately called his guys together and hit them with the hard facts.

"Man, you guys did exactly what society expected you to do. You just proved them right. And it's a shame. Now you've got 20 minutes to produce that money and the watch, or we're all going home." Kirk walked out and shut the door. He could hear the guys shouting at one another and scrambling around inside the cabin. In a moment, the door opened again, and the toughest kid in the crowd presented Kirk with the $35 and the watch. The money was already spent, but the kids had emptied their pockets and pooled their cash.

When the staff person came to pick up the stolen goods, someone ... 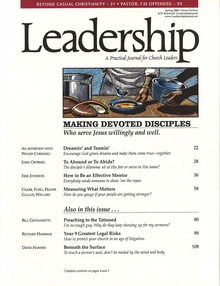