Amid so many forms of communication—multimedia, music, and more—what is it about preaching, even today, that carries life-changing power?
4 leaders respond 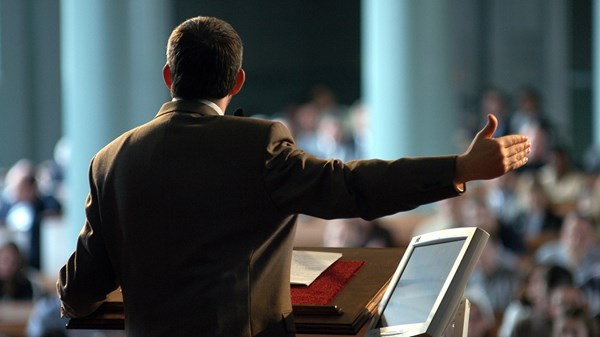 From Text to Transformation

John Willis Sr. came to me when he needed money, needed another drink, or when he was looking for his wife at church. I prayed with him, helped him, and preached to him. But after ten years of listening to my preaching, he was still the most notorious, unsaved alcoholic in our Cincinnati suburb.

Preaching does not always produce immediate, visible results. Yet I preach from the belief that God is faithful.

"My Word does not return void," God says, and Scripture often acts as a time-release capsule, effecting eventual transformation.

Like Jesus on the road to Emmaus, preachers walk alongside their listeners, opening the Scriptures. Preachers are "exegetical escorts" who usher people into the presence of God. It's not the preaching itself, but being in the presence of God that changes lives.

On December 31, at a New Year's Eve service, John Willis Sr. was saved. No one, not even his wife, could believe how radically his life had changed. And why, after ten years, did he suddenly hear the message now?

The next summer John told me he was called to preach. That July he began preaching with power a message he still preaches today, 20 years later—how God saves from the uttermost to the guttermost.

For John Willis Sr. and for millions of others each Sunday, preaching funnels all Christian disciplines into what P.T. Forsythe calls, "A Hallelujah Chorus of ordered community."

Preaching not only initiates faith, like it did with John, but it also disciples believers toward maturity and inspires people by rehearsing the promises of God. I don't know any other Christian practice that does all three.

Our other practices may assist, but they will never replace preaching, for, "How shall they hear without a preacher?" (Rom. 10:14).

The Story Made Personal

Though I was raised in the church, God was only one spoke on the wheel of my life. Then I went to camp at age 17, and I heard an old man give a message, telling a series of stories about God's love. I was challenged to make my life the next story in the chain.

People can read and study God's Word, but when someone stands up and declares how God has changed him or her, people are opened to change in their own lives.

Here's an example: Early in my marriage, while traveling to speak, I remember sitting in the St. Louis airport writing notes for a sermon about quality family time. But I sensed God saying to this busy traveler, "Look at you. What are you going to say about making family time a priority?" It was a pivotal moment in my life.

I sometimes use that story in preaching: "Some of you feel like you're in that St. Louis airport. You know what I mean when I say, 'Failure is succeeding at something that doesn't matter.' You wonder how to make family the priority it needs to be." Then I read from Deuteronomy 6—"Teach these things to your children, when you sit, when you walk, when you lie down"—and I sum it up, "Quality time happens only in the midst of quantity time."

From the 15 year olds who are listening, to the 80 year olds, the one thing that cuts across the divide is this: "I'm just a guy like you, and this is how God's Word has changed me." It doesn't have to be eloquent. It just has to be true.

In 1993 our youngest son, Mark, was killed in a car accident. He was 16. In the grief that followed, my preaching changed. The old clichés didn't work anymore, the hymns sounded hollow, and even the Scriptures seemed to mock. "I'll never give you more than you can handle," the Word tells us. I seriously questioned it.

On the days leading to Sundays, I struggled like King David: "Why, O God?" I shook my fist; I wondered at times if God even existed. And when I stood on Sunday, heartbroken, wondering, doubting, grieving, the people saw it. In those moments the Word, filtered through a broken man, gave our congregation permission to be broken—to drop the clichés and wrestle with their doubts.

Transparent preaching is unique among Christian disciplines because it fulfills all three laws of persuasive communication framed by Aristotle—ethos, logos, and pathos. Preaching is wrestling with the ethical demands (ethos) of the truth of God's Word (logos) communicated through the passion of a preacher (pathos). It is said that in order for the Word to be relevant, it must be filtered through human experience. And preaching is God speaking his Word through the pain and the passion of a preacher.

In the time following Mark's death, my family wrestled with doubts, too. I told them, "I have nothing to take away your pain. The best gift I can give you is my preaching."

Mark's death forced my preaching to drag the Word through a furnace of human heartache. The cliché Christian answers and platitudes were burned away. Only truth remained.

And our church changed. Ours has become a place for hurting, grieving people—those who bear God's scorch marks—to struggle openly through faith.

David was one of those who began attending as we wrestled with the tough issues of our faith. We soon learned David was dying of brain cancer. The congregation watched him slowly walk toward death.

David invited me to his home to eat a special ethnic dish that he made himself. He told me, "I wanted to walk my girls down the aisle one day, but now I won't have the chance. And I have some questions. Is God sovereign?"

I assured him God was.

Not an easy question to answer for a man who's lost a son, but I said, "You can trust him, David."

The next Sunday, when we sang "Shout to the Lord," David had determined he must stand to sing the song, yet his weakened body wouldn't allow it. So his doctor on one side and a church elder on the other helped him to stand and held him up through the song.

David trusted God until he died. Like others, he trusted because he heard a preacher of whom he could say, "There is a broken, scorched man. Yet still he assures me that God is sovereign and I can trust him."

After accidentally staining one of my shirts with olive oil, I went to the utility room and did more than just throw it in the wash. First I poured liquid soap directly on the spot and let it soak in for a while before tossing it into the machine. I wanted to bring the full strength of the soap to bear against the stain. When I later removed the shirt from the wash, the stain was gone.

Although God uses many means to bring people into a right relationship with him, his full strength comes to bear when the Word of God is preached in the power of the Holy Spirit. When our purpose is to reshape people into the image of Jesus Christ—not merely helping them feel better or providing inspiration—nothing has greater potency than biblical preaching.

Why? Because conforming people to Christ is a spiritual and supernatural task. It is not merely emotional, rational, or persuasive, although those elements come into play. A spiritual task requires a spiritual tool. Jesus said, "The Words I have spoken to you are spirit and they are life." And, "Sanctify them by the truth; your Word is truth." Hebrews 4:12 vividly portrays this spiritual dynamic: "The Word of God is living and active. Sharper than any double-edged sword, it penetrates even to dividing soul and spirit, joints and marrow; it judges the thoughts and attitudes of the heart." Trying to effect spiritual change with a nonspiritual tool is like trying to wash out oil with tap water.

While other useful forms of ministry and media can present the Word of God, it is preaching that brings the full weight of the Word of God to bear on the soul and spirit.

Craig Brian Larson is editor of PreachingToday.com and pastor of Lake Shore Church in Chicago, Illinois.

Discipleship |Outreach
Tips for Life Application and Bible Verse Memory
One of the main goals in children's ministry is to bring the Bible, God's Word, into the lives of children.
Trending