I preached on same-sex marriage and the protesters came out.
Ray Pritchard

When pastor Ray Pritchard decided to address the contentious issue of same-sex marriage, he didn't keep it a secret. Through a direct mail campaign, Pritchard's church, Calvary Memorial in Oak Park, Illinois, publicized the sermon topic for its morning services and announced that Stephen Bennett, a former homosexual, would speak at the evening service.

How the controversial topic was handled, or mishandled, would have a lasting impact on the church's standing in the community.

Oak Park has a large gay population and prides itself on its "open and affirming" attitudes. The village president is a lesbian, and several members of the school board are openly gay. Into this setting, with same-sex marriage on the national agenda and tensions rising because of it, Pritchard felt compelled to bring a biblical perspective to the ongoing public debate.

In addition to the 40,000-piece mailing, the church advertised in local newspapers and on the web and posted a giant banner over the building's entrance ... 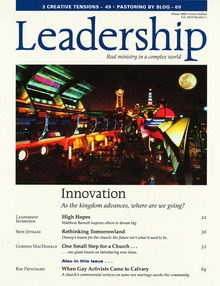 This article is from the Winter  2005 print issue of Leadership Journal. Subscribe to continue reading.