Nairobi Chapel pastor on mission trips, and working well across cultures.
An interview with Oscar Muriu

In the 1950s, while Kenya was still a British colony, a group of white expatriates started a church. Since they were from free church backgrounds, largely Plymouth Brethren, they called it Nairobi Undenominational Chapel. The church was located near the Governor's house, within a secured area where Africans were not allowed. So the church had no African members.

After the Mau-Mau Rebellion, as whites left Kenya for Rhodesia and South Africa and other places still under British rule, the church dwindled. In the meantime, the University of Nairobi, in the center of the city, began growing and occupying the land around the Chapel. But until 1989, the church had no university students, and only one African family among the remaining twenty members in the congregation.

That's when the congregation approached an indigenous African church to take over. And a young graduate student named Oscar Muriu became the pastor of Nairobi Chapel.

Today the church has planted 25 congregations in Nairobi, with ... 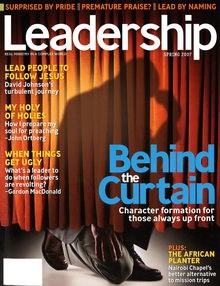