A city planner says it is time for churches to serve their communities by restoring sacred spaces to the public square.
A Leadership interview with Mel McGowan

Two of Mel McGowan's earliest memories are bombs exploding in Saigon during the Vietnam War and then, a few months later, gazing at the lights of Main Street USA at Disneyland. The juxtaposition of those scenes was, in his words, the start of his "weird wiring." McGowan was born to an American G.I. father and his Vietnamese wife near the end of the Vietnam War but was raised primarily in Germany. McGowan became a Christian in high school when his family moved to California. He then followed his best friend to film school with plans to influence the world through movies. But McGowan was soon drawn to architecture and urban planning courses.

After graduation he went to work for Disney designing a number of the entertainment company's properties, including Downtown Disney. McGowan now serves as the president of Visioneering Studios, a leading design firm for churches and ministries. Rather than communicating through movies, he found his calling by communicating through sacred space.

Clergy Compensation: A Survey of Leadership Readers
In what ways do pators and lay persons agree or disagree about pastors' compensation, their ability to cope financially, and their financial condition?
Paul D. Robbins
Trending 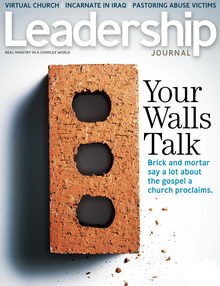