If a "physical" is important, so is a "spiritual"
Gordon MacDonald

My doctor's scheduler called several weeks ago and said it was time for my annual physical.

"Are you talking a whole-nine-yards physical?" I asked.

A day or so later my dentist's scheduler called to say it was time for an annual check- up on my teeth.

I know I'm supposed to be thankful for both of these examinations, but the truth is that I'm not … until they're over. Why?

Well, how about the loss-of-dignity issue when they put you in that paper gown? Then there's that moment of realization when you know that they know you haven't kept all the promises you made during last year's examination (dropping a few pounds and flossing every day). Finally, and more seriously, there's always the chance that you'll hear bad news: a needed surgical procedure or a root canal.

Still, a wise person heeds the scheduler's summons and shows up at the appointed hour.

As I left the doctor's office the other day, I wondered if there was an equivalent of a physical for ... 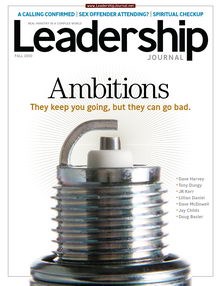