Are You Living Your Calling?
BCLStore.com

A few years ago researchers at Stanford investigated how college students multitasked. They assumed they did it much more effectively than older adults. The researchers expected to find highly toned cognitive abilities that allowed effective multitasking. What they actually found was that the more people multitasked, the worse at it they were. They were worse at identifying relevant information, more distractible, and more disorganized. They even became worse at what multitasking is supposed to help with: switching tasks seamlessly. Multitasking, they concluded, impairs one's ability to think reflectively. Such reflection is about thinking long enough on a topic to weigh a number of ideas. That can't be done in 30-second bytes while also updating a Facebook page, changing the playlist on an iPod, or watching the latest cute cat video on YouTube.

I think leadership in our churches suffers, if not from multitasking itself, certainly from the spirit of multitasking. Like Martha in Luke 10:41-42a ...

"The Disuse, Misuse, Abuse, and Proper Use of Prayer"
Fred Smith Sr.
Trending 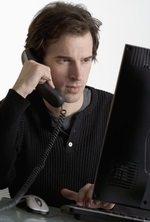