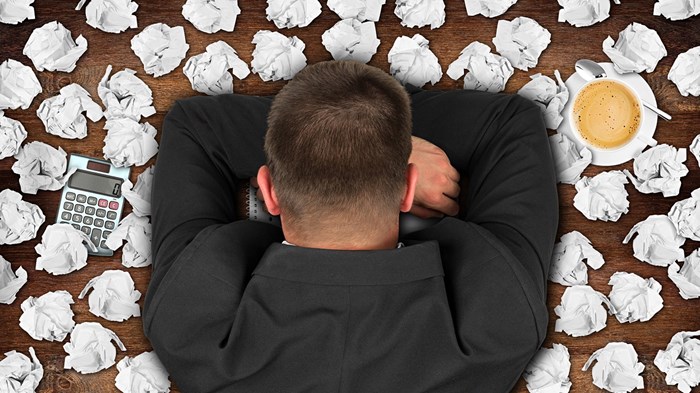 Don't fall into the trap of writing down your goals and objectives, or even worse, handcuffing yourself to specific times when you're supposed to feel obligated to do them. Instead, respond to things as they come up. Put off big projects until you have large chunks of uninterrupted time to accomplish them, or when you feel inspired. Then try to complete the task with one herculean effort.

If you need to have someone checking up on you, it's a sure sign of your incompetence and lack of self-control. Independent-minded people make the most progress when they bypass the team and do their own thing. Accountability is overrated.

Only arrogant people set lofty goals. Those who dream big often end up flat on their face. At the end of the day, it's much better to aim for mediocrity and reach your goal rather than trying to do something extraordinary, and becoming frustrated when you can't quite accomplish it. Better safe than sorry. Those who risk the most never experience the security of living in the status quo.

4. Point out the mistakes of others.

People need to be aware of their failures or they'll never be able to change. So, keep an eye out for others' missteps or mishaps and then leak the word to the rest of your employees or volunteers. Be specific and stern. Don't give the person a chance to explain his actions since that's usually just a way of denial or shirking responsibility. It's even more beneficial to make the shortcomings of others public, so that other people in the organization can keep them in line.

If you lost a job or got a demotion or didn't get the position you were vying for, brood over it. Dwelling on past mistakes, unresolved conflict, and ongoing disagreements will help give you perspective on your current situation. Obsessing over negative experiences helps you avoid them in the future.

Get into the habit of thinking about hurtful conversations you've had and coming up with things you wish you'd said, or clever comebacks that might've ended things right then and there. It'll give you that fire and motivation to speak up more authoritatively next time around.

6. Wait until the last minute.

You never know what the future holds so why waste your time doing things that might not even end up being necessary? Who knows, you might get fired, quit, or die and you'd just have wasted all of that time on that project. It's much more beneficial if you just put off working on something until the consequences of not doing it outweigh the effort it takes to do it. If other people hassle you about this, it just shows that they're not as good at working under pressure as you are.

If people criticize your work, they are, in essence, attacking you. Criticism of a project you've worked on is a direct assault on your intelligence, personality, and character. As a matter of self-respect, it's important that you don't let them get away with that. If you don't stand up for yourself, you might come across as a pushover.

So, show your strength and conviction by defending every idea you have. Rather than "choosing your battles," remember that if someone criticizes your decisions, actions, or suggestions, they've already chosen to attack your personal self-worth. Don't let them get away with that.

Steven James is a bestselling author who has followed all of these seven tips at some point in his life and somehow lived to tell about it.

Join the conversation on Facebook
Tags:
FailureIntegrityPrayer and Spirituality
Posted:February 27, 2012

VITALITY IN THE CLOSING DARKNESS
What happens when a pastor begins to lose his mind? A true story
Kevin Miller
Trending