News you can use
Eric Reed

The recent find of a first century Christian ossuary in Jerusalem had the archaeology world chattering recently, with what was called "the earliest Christian iconography ever documented." The striking fish-shaped image carved into the stone burial box sparked speculation that an orb accompanying the image represented the prophet Jonah. Much was also made of apparent inscriptions about "resurrection," prompting some scholars to speculate about the possibility of the tomb belonging to members of Christ's own 12 disciples! Accompanied by bold claims that this was evidence for a nearby tomb being Christ's own, the story made headlines. It was picked up by international media before lighting up the blogosphere-before being laid to rest, that is.

Eventually, some sharp-eyed observer realized that the image in question was most likely of either a "nephesh tower," (a Jewish burial image), or of an ancient amphora. Both motifs are common to this type of burial box. When rotated, the image resembles ...

Outreach
Church Rater or Church Hater?
Does a new church rating website help or hurt those seeking a congregation?
by Skye Jethani
Trending 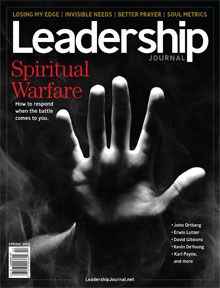 This article is from the Spring  2012 print issue of Leadership Journal. Subscribe to continue reading.