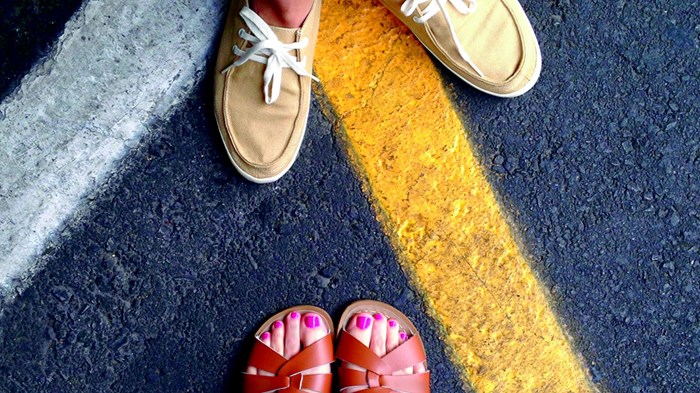 So where exactly is the line?" I thought I knew what he was getting at, but I asked him to explain, just to be sure.

"My girlfriend and I haven't had sex, but we've done some stuff. You know?"

Yeah, some stuff. I know.

"Is it only actual sex before marriage that's wrong?" he asked. "And at what point does it become sinful? Where's the line?"

For a college campus minister, conversations like this are common. On one hand, that's great because it means these young adults are willing to talk about an intimate topic and discuss what God wants of them. On the other hand, such questions illustrate a massive challenge. They show just how thoroughly our culture's preoccupation with sex has shaped our thinking.

We are saturated with sexual images. Commercials, the Internet, movies, even the news—we see it every day. The longer we are exposed to this obsession, the more elevated it becomes in our minds. Until it becomes the ideal, the ultimate pursuit that validates us and trumps any competing claim on our lives.

If we talk only of what's off limits, we miss what's good, what's God's design for sexuality, and how he uses it to shape us over a lifetime.

In a college setting, where students are routinely urged to find themselves, to be true to themselves, to do what makes them happy, sexual desire is practically deified. Conversations focus on what students want sexually, or what they feel entitled to. It is assumed that sexual choices are confined only by our preferences and imaginations. When young adults ask me if a particular sexual activity is considered sinful, it's as if they're saying, "Is God really going to deny me something I want?" The psalmist wrote, "Delight yourself in the Lord and he will give you the desires of your heart (Psalm 37:4). Today the mantra seems to be, "Delight yourself with the desires of your heart—and hope the Lord approves."

When We Major On The "Don'ts"

It's disheartening to encounter this mentality, yet I'm more saddened by the fact that we Christian leaders often buy into similar premises. Young people ask "Where is the line?" and we're only too happy to tell them. This communicates that we're most concerned with what's off limits—not what is good, not God's design for healthy sexuality, not the purpose of sex, not how God uses it to shape us and what we have to look forward to over a lifetime.

Within the church, the conversation is dominated by debates about same-sex relationships. Don't believe me? Google any combination of terms involving sexuality, Christianity, research, news, etc. Most of the recent results will be related to same-sex relationships. And most of those articles will deal with questions of acceptance, opposition, and laws that are being proposed and/or passed. While this topic is important, it's often just another way of focusing on what is or isn't off-limits. It's another way of asking the same question, "Where, exactly, is the line?"

In addition to emphasizing the "Don'ts" of sexuality, we have often focused on the potential pitfalls: unplanned pregnancies, potential diseases, emotional and psychological trauma, and the likelihood that someone who has sex outside of marriage is less likely to remain faithful in a marriage. These potential consequences are real, but they're heard by young people as mere scare tactics to keep them in line.

I'm starting to believe this approach to discussing sexuality with young adults is flawed. What if we re framed the entire conversation? What if we kicked sex off the pedestal and made glorifying God the ultimate goal? What if instead of asking where the line is, we started by asking, "What is God's will for my life?" What if rather than asking what we're entitled to, we ask, "What does it mean to honor God with my body?"

When it comes to sexuality, the church cannot just broadcast its moral values from the pulpit and expect young adults to obey. It just won't happen. "Because God says so," won't cut it.

If we're willing to engage with young adults—as pastors, campus ministers, small group leaders— they're certainly willing to have conversations about desires, the future, passions, relationships, and everything else. In spite of the cultural obstacles that surround us, there is hope. But we must create spaces for honest, robust conversations about sexuality with members of the younger generation.

Joseph, an unmarried colleague of mine, recently had a student ask him if he was waiting until he was married to have sex. Joseph said yes, he was. The student then explained that he's been tempted to have sex with a certain girl. So he asked my colleague, "What can I do to not have the desire to have sex?"

It's easy to breeze past that question and not detect a problem with it. But stories like this illustrate how we have inadvertently linked the desires with the acts themselves, as if the desires themselves are immoral.

Joseph told me, "I'm shocked that many of the Christian college students who attend our church and with whom I meet have a fragmented, myopic understanding of sexuality, of desire, of intimacy, of becoming one with someone else."

After the church Joseph attends did a sermon series on "Love, Sex, and Dating" that presented a bigger vision of love and sex and the beauty of God's purpose for it, he was flooded by surprised students.

"They said things like, 'This is the first time I've heard any of this,' or 'You're the only people I've heard say these things.'"

"I think that is telling," Joseph said. "So many people in my generation, particularly those who grew up in the church, were given the 'what' without the 'why.'

"The obvious—and what should be 'Christian' response—is a holistic presentation of sexuality," Joseph says. "One that doesn't suppress sexuality or tell us that we're not supposed to be sexual until we're married. Rather it considers and celebrates humans as sexual beings, but also seeks to live out the fullness of God's design for sexuality, no matter where we are in life."

Joseph believes the issue is not so much what he and his peers have heard about sexuality; it's all they haven't.

"When young adults say they haven't heard anyone in their church talk about sex, it's because they actually haven't. In a culture that porn-ifies sex, not only do we not do it, we don't even talk about it. And then we send out children into the world with a woefully impoverished understanding of sex."

Jamie, another colleague of mine, has observed in recent years that our culture, more than Scripture, is shaping theology for college students. She is concerned that these students lack a biblical foundation, especially in matters of sexuality.

In spite of that, she remains encouraged by what she's seeing among her peers and in the college students with whom she works.

"I'm seeing students demonstrating a quiet obedience in their sexuality. For a while there was such a loud, flashy abstinence movement, and there are places where that was helpful. But I'm seeing students now who are choosing faithfulness in their sexuality and it's just what they do. It's just another area to pursue obedience and choose faithfulness."

Cora, a recent college graduate, told me, "In honoring God with our sexuality, it needs to be understood that God created us to be sexual beings, to desire intimacy. His plan includes two people becoming one. 1 Corinthians 6:19-20 might be over quoted, but that doesn't make it any less valid. Our bodies are a gift and in honoring them, we honor their creator."

The way to honor our creator with our bodies is clear to her.

"That means not participating in hook-up culture, waiting until marriage, and not pushing the boundary of 'how far is too far.'"

She admits that she's been fortunate to be part of Christian communities that haven't avoided conversations about sexuality, but she says this hasn't been the norm for her peers.

"Our sexuality is not our identity," she adds, "but it's a part of who God created us to be."

Tyler Charles is a campus minister with the Coalition for Christian Outreach (CCO) at Ohio Wesleyan University in Delaware, Ohio. He also serves on staff at Delaware City Vineyard as the young adult ministry coordinator. He writes at tyler-charles.com.

Discipleship
Are You Asking the Right Questions about your Youth Group?
Few youth leaders disagree that there's a need for effective youth work--it's the how that causes problems. Here are four questions youth workers should ask themselves about their ministry.
David Veerman
Trending