These meetings are dry, contentious, and sometimes crucial for discerning God’s will.
Jeremy Steele 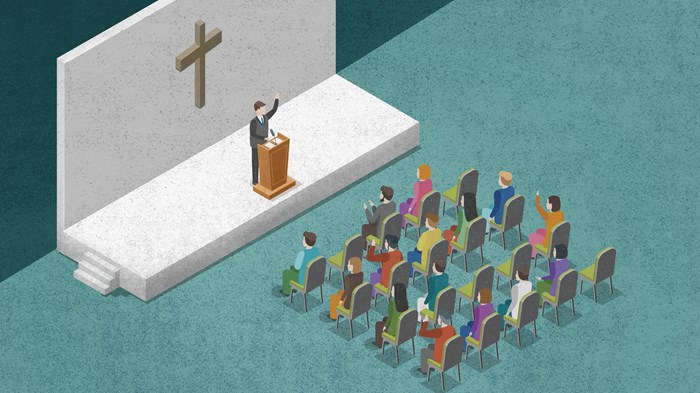 The room felt like a balloon about to burst at the meeting that night. The church council was assembled to make a decision destined to divide the church. People sat on one side of the aisle or the other, based on their vote preference. It was like a grim wedding.

Representatives from the two factions made speeches in support of their proposals, couching their criticisms of the other side as compliments and prayer requests. After what seemed like a never-ending discussion, it was time to decide.

What was the topic up for debate, the issue for which people were ready to leave their beloved church? The naming of a new building. Some wanted it to be named after a lovely saint who had just passed—Mr. Joe—and others wanted it to honor a living saint—Mrs. Divine.

The tension was high because everyone loved the church. No one actually wanted to leave, but the fighting got so heated they were on the brink of hurting themselves and the church.

Every time a major Christian denomination or local church gathers for their business meeting (I recently reported for Christianity Today on The United Methodist Church doing just that), people hurl critiques about that method of discernment. Surely these stilted, bureaucratic proceedings can’t be effective or holy. The process of motions and amendments and points of order is a far cry from our typical discernment process which might involve personal prayer and, in my case, a good cup of coffee.

How could the Holy Spirit speak through something as dry as a committee meeting or as acrimonious as a church council? Or if you want to phrase it in the terms of an angry Twitter user, “You can’t take a vote on God’s will!”

As it turns out, the history of Christianity is replete with committee meetings.

After Jesus’ ascension, the disciples returned to Jerusalem and headed into the Upper Room. After they worshiped together, Peter rose and commenced the first committee meeting of the early church. After explaining that Judas’s betrayal fulfilled Scripture, he made a motion. “Therefore it is necessary to choose one of the men who have been with us the whole time the Lord Jesus was living among us, beginning from John’s baptism to the time when Jesus was taken up from us. For one of these must become a witness with us of his resurrection” (Acts 1:21–22).

Peter asked for those present to decide on a replacement for Judas. How did they do it? Not by waiting on the sky to open and writing whatever name appeared on their first-century whiteboard. They did what churches all over the world do when they decide on new leaders: They made nominations. “So they nominated two men: Joseph called Barsabbas (also known as Justus) and Matthias” (Acts 1:23).

We have a term for a gathering that takes roll (Acts 1:13) and includes motions and nominations: a committee meeting. And that’s not the only one in Acts. Similar groups gathered in meetings to send Peter and John to Samaria (Acts 8:14) and to decide how to deal with Gentiles (Acts 15). These meetings inspired many verses that don’t appear on plaques or Pinterest boards, like this one: “The apostles and elders met to consider this question” (Acts 15:6).

From Bible times to the present, God has moved in powerful, and often boring, ways through committees. The Holy Spirit has been active in legislation through the prayer of devoted disciples offering motions and taking votes. It’s the duty of church leaders to model for our people a reverent and humble approach to these meetings. Here are three ways I’ve found to do that well.

Open with the Spirit

Far too often, the opening prayer time of a church meeting is a formality I breeze through or omit altogether. I’d like to think I omit it for expediency’s sake, but the truth is I often forget that meetings are an act of spiritual discernment.

When I treat committee meetings with no reverence, all I get is a boring business meeting. However, when I begin a meeting by recognizing it can be a work of the Spirit, the atmosphere in the room changes. I try to stretch my prayers beyond “Please bless this meeting” to intentionally open everyone up to the presence of God. When I do that, the meeting transforms into an act of worship.

It is easy to lose sight of the spiritual nature of committee work when you are considering three different proposals for new carpet in the foyer. In these moments, the conversation usually turns toward pure practicality. Passion leaks out of the room, and everyone fixates on the nuts and bolts.

Don’t get me wrong; nuts and bolts are important. But they are there to serve the bigger mission of the church. And when committees don’t approach nuts-and-bolts decisions as spiritual discernment, I’ve seen them make practical decisions that don’t further the work of the kingdom.

In most cases, the solution is simple. When I feel the turn away from spiritual discernment toward excessive practicality, I redirect the discussion to the mission. I say something like, “We have three great carpet proposals here. Now, I want us to think about which of these proposals will help us further our mission of loving God and loving others.”

Thank God for Speaking Through Committees

Sometimes I’m not able to redirect the discussion to the church’s mission, and the meeting ends with everyone in frustration or exhaustion. In those moments, I still have one final tool in my toolbox.

Instead of offering a traditional closing prayer, I take a moment to switch gears and listen. We sit in silence to clear the air and then thank God for the way he has spoken through committees throughout history and for doing it again in our presence. We ask God to continue speaking to the committee in between meetings so everyone can arrive at the next one ready to listen. Hopefully this will color their thoughts between the end of this meeting and the beginning of the next one.

In the final hour of the contentious committee meeting to name the building, the hand of a teen went up in the back. The chair recognized the young person, who walked up to the microphone and said, “I don’t want us to fight about this, and I really don’t want to leave because of this. Instead of naming the building after Mr. Joe or Mrs. Divine, couldn’t we just call it the Joe-Divine Building?”

It was as if someone let the air out of the tension-filled balloon. There was no more debate. Someone called for the question, and the vote was unanimous. It was now the Joe-Divine Building.

You likely have a meeting on the horizon. And you probably won’t be able to solve the difficult decisions in that meeting with a hidden third option, as the church from this story did. But the Spirit can still speak through this form of discion making. Whether you are approaching your future meeting with joy or dread, may you walk into the room knowing that you are following in the footsteps of Christians like Peter, James, and John. May the people follow your lead as you approach your work with reverence and submit yourself to the Holy Spirit who has the power to move through anything—even committee meetings.

Discipleship
Prayer: From Seeker to Sought
This month, let's consider the spiritual practice of prayer. Prayer not as ritual but as a means to relationship; as conversation initiated by the Holy Spirit, in which our primary role is to listen.
by Keri Wyatt Kent
Trending