I was using Jesus as a means to an end in my ministry.
Jay Kim 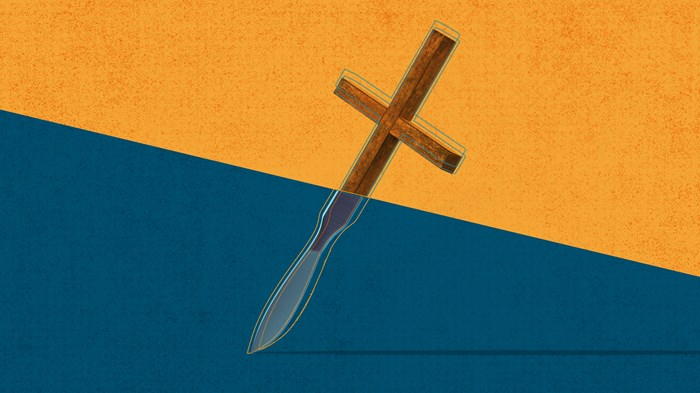 In the mid-2000s, I spent several years as a youth pastor. One of the most rewarding aspects of working with teens was seeing their eagerness to bring about positive change in the world. On almost a weekly basis, they would share with me about some new global crisis they had discovered and their wide-ranging ideas for how we could do something about it. Wanting to empower our students, we often took their ideas and ran with them.

One of these events was a march through the downtown area of our city to raise awareness about the atrocities being done to children in northern Uganda. To help our teens promote the event to our church, I leveraged the story of Jesus and his family fleeing to Egypt in Matthew 2:13–15. With as much oratory and poetic skill as I could muster, I emphasized that if Jesus’ family had to walk all those miles from his home to Egyptian territory because of the impending threat of genocide, surely we could walk a few miles together to stand against the evils of our day and age.

Our students organized and executed the event spectacularly. Teenagers from all over the city showed up to walk through downtown, holding signs and banners, singing and chanting in solidarity. I was proud of them and thrilled for them. But afterward I couldn’t shake the sense that something was off about my approach to promoting the event. Sobered up from the intoxicating energy of pulling off a successful event, I was faced with the embarrassing reality that I’d ripped the Jesus-flees-to-Egypt story out of its appropriate context. I’d co-opted it to further my own agenda, and in doing so, I‘d coerced a call-to-action out of the narrative that doesn’t appear in that biblical story. I quickly realized that although Jesus had been a focal point in motivating people to participate, he had been glaringly missing from the event itself. I’d convinced students to show up because of Jesus, but I’d failed to lead them effectively to Jesus.

Over the years, I’ve learned and grown from experiences like these—my own as well as others’. But I am still often tempted to co-opt Jesus as a means to achieve my own ends. I have a strong sense that I’m not alone. For those leading in the local church, even when our intentions are pure, it’s all too easy to fall into the trap of seeing Jesus as a means to an end rather than the end itself. This extends beyond social justice and compassion efforts like the event my students put on.

In counseling situations, it can be easy to leverage Jesus in inappropriate ways. We can tell a hurting person that Jesus commands them to “love their enemies” and “pray for those who persecute you.” Of course, that’s true, but if an abusive spouse or friend has victimized the person you’re counseling, those words may encourage them to not only tolerate but also accept abuse as God’s will for their lives.

In trying to motivate financial giving, it can be easy to use Jesus to reach certain metrics to fund our ministries. We may retell the story of the widow’s last mite to urge people to give sacrificially. Yet in doing so, we may be heaping guilt and shame on lower income congregants.

In preaching and teaching, the same thing can happen. For example, far too often, Jesus’ words in Matthew 18:20, “Where two or three gather in my name, there am I with them,” are irresponsibly leveraged to coerce listeners into more frequent Sunday attendance or joining a small group.

Let me be clear. Prayerfully and thoughtfully setting goals, creating metrics, and outlining desired outcomes are all necessary elements of church leadership. But this ultimate truth is undeniable: If Jesus is not always the destination, then the journey we’re taking is headed in the wrong direction. The way we read, study, and teach the Bible must point first and foremost to Christ. In light of this, here are three key questions I’ve found helpful as centering points in my decision-making process, my approach to serving our church community, and stewarding God’s call to leadership.

Do I see Jesus as the scalpel or the surgeon?

Imagine being ushered into an operating room for surgery. As you lay there, nerves buzzing, anxiety rising, the surgeon walks in. Now, imagine the surgeon saying to you, “Listen, this is my first surgery. Ever. I’ve never done this before. But don’t you worry. This scalpel right here? It’s top of the line. It’s got great reviews online.” How would you feel? Clearly, the importance of the tool pales in comparison to the skill of the surgeon.

Too often I see Jesus as the scalpel when it comes to church initiatives. I use him as a tool to cut out perceived weaknesses in my community and in the world, to be replaced with whatever I deem best. If I’m not careful, I make myself the surgeon. But I am not nearly skilled enough to bring widespread healing and wholeness. I must begin to see Jesus as the surgeon, placing my complete trust in his able hands and asking him to do not only the work I long for, but the complete work only he knows must be done in the church and in the world.

Am I misrepresenting Jesus to advance a particular issue, initiative, or decision?

This is one of the primary symptoms of trying to use Jesus as the scalpel rather than inviting him to be the surgeon. For example, when it comes to the immigration issue, one of the prominent social justice complexities of our day, many of us have heard or read some form of the idea that Jesus was himself an illegal immigrant. I’ve heard this refrain on national television, like when Reverend Ryan Eller stated these words on a CNN interview a few years ago. I’ve also heard it in my own social circles, from passionate friends who are heartbroken, as I am, at the tragic immigration stories bombarding our news feeds. Almost always, the goal is to remind Christians that the king they worship was part of an at-risk people group. As an immigrant myself, I am overwhelmed with empathy when considering the crisis at hand and deeply convicted when reading through the Bible’s constant call to welcome the stranger and care for the foreigner.

But I’ve also come to believe that to draw a simple parallel between Jesus’ circumstances in the first-century Roman world and the immigration issues of our day can actually counteract the good we long to do. Like many refugees fleeing to the US today, Jesus was escaping imminent threat of death and seeking asylum in a place far from home. But unlike our contemporary situation, Egypt and Judea were both Roman provinces. In the Expositor’s Commentary on Matthew, D. A. Carson writes, “Egypt was a natural place to which to flee. It was nearby, a well-ordered Roman province outside Herod’s jurisdiction.” It seems there is both continuity and discontinuity between Jesus’ flight to Egypt and immigrants fleeing to the US.

Why does this matter? If our entire case for loving refugees and immigrants rests on the idea that Jesus experienced the same plight that immigrants experience today, we may limit the strength of our engagement in other areas. Jesus was never sexually abused, yet we still know from a host of other biblical teaching that sexual abuse is evil. Jesus was never a divorcee, but we must still address the divorce epidemic in our culture. Ultimately, the reason we love immigrants isn’t only because we see Jesus as an immigrant. It’s primarily because we see Jesus as king. Anything less limits our view of all that he came to accomplish. King Jesus cares about immigrants; he cares about the abused; he cares about the divorced, the orphans, the widows, the fatherless, the oppressed, and the marginalized. And because he is king, when his kingdom is fully realized he will make all of these wrong things right.

Am I focused more on deconstruction or declaration?

Through his death and resurrection, Jesus inaugurated a new age. He ushered in the beginning of God’s good new world. Now, two millennia later, we live in the paradox of what many call the “already and not yet” reality of God’s rule and reign. This perspective is crucial to understanding our role in the present, as we follow Jesus into our personal and communal futures. In leading and serving the local church, we must remember that what we do now matters insomuch as it shows glimpses in the present of what lies ahead in the future, the coming day when Jesus will reveal in full what we can now only see in part.

This has tremendous implications for how we counsel; how we disciple; how we steward the time, resources, and finances of our communities; how we preach and teach; and more. Recently this has shifted the way I think about serving my church. It is a shift from deconstruction to declaration. In years past, when I found myself using Jesus as the scalpel rather than inviting him to be the surgeon, my interest was mostly in the deconstruction of all that I thought was wrong with the world, the church, and the people in my community. I quickly critiqued whatever I thought was wrong and pressured myself to instigate change.

But embracing the “already and not yet” reality of God’s kingdom has dissipated that pressure and given way to the much more dynamic and fulfilling call to declare what Christ has already done, what he is continuing to do, and ultimately, what he will do in the end. Pointing people toward that future reality is the fundamental responsibility of all who lead and serve in the local church. In doing so, we will begin to see people and communities transformed by the compelling and undeniable vision of Christ, the great surgeon who has healed us, is healing us, and will heal us in the end.

Yes Church, We Still Need Seminaries
But not the way we think we do.
Lane Severson
Trending