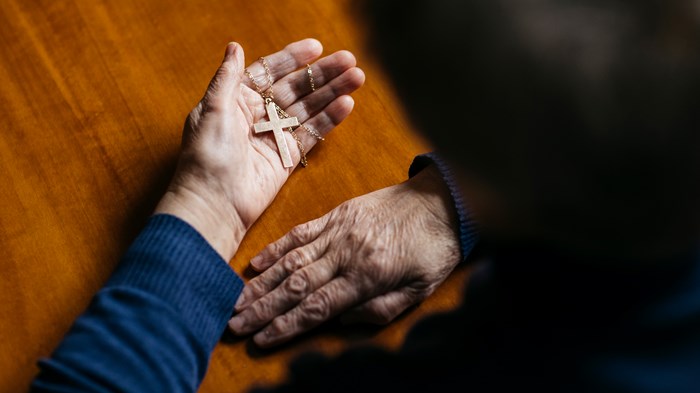 At the church I pastor, older folks in the congregation mostly just call me “Pastor,” because older folks still call their pastors “Pastor” or maybe my name isn’t all that important compared to my holy vocation or maybe they’ve seen so many pastors come and go that remembering names is a bit touch and go.

My calling as Christ’s shepherd is to proclaim his death and resurrection for the healing of the world. Although this gospel message seems familiar enough when I say it from the pulpit, it takes on new power when I visit parishioners whose bodies are failing.

Some years ago, I went to see a congregant named Tom in the hospital. I remember how his face lit up when I brought him communion—the same communion in the same type of beat-up, old, portable communion kit that he himself had brought to hospitals for years when he served the church as an elder. We mouthed the familiar words together:

The Lord Jesus, on the night he was betrayed, took bread, and when he had given thanks, he broke it and said, “This is my body, which is for you; do this in remembrance of me.” In the same way, after supper he took the cup, saying, “This cup is the new covenant in my blood; do this, whenever you drink it , in remembrance of me.” For whenever you eat this bread and drink the cup, you proclaim the Lord’s death until he comes. (1 Cor. 11:23–26)

A couple of years later, my new wife, Rachel, and I found ourselves living next door to Tom’s widow, Charlene. She died clutching a small wooden cross that I had given her the last time she was in the hospital.

I remember how Betty would always answer the phone in her distinctive smoker’s voice, our visits reduced to phone calls because of COVID restrictions. She’d ask, “Pastor, why does the Lord let me continue living when so many I love have already been taken?” And then she’d answer her own question: “Because he wants me to tell the people in here about his son, Jesus Christ.” And she did. She became a nursing home evangelist.

A beat-up communion kit, a cross held on to for dear life, and a nursing home evangelist. There is no other way to be a pastor here, under the sun, than to hate death and love resurrection. Death may well come for any of us at any time, and we should order our affections accordingly.

For the church packed with the young, death often seems distant and tragic. By contrast, death and resurrection are not theoretical to those on the latter end of life. These are the fast-approaching realities of their lives. It is the materialization of their theology. With that in mind, seniors need the beauty of Christ’s death and resurrection applied and proclaimed in the normative life of the church.

This helps saints of all ages. Death is not as far off as we may think. Multigenerational churches, for example, have the power to prepare sapling saints for what lies ahead of them and to reinvigorate senior saints with memories of their first love, Jesus Christ.

In Eugene and Eric Peterson’s book Letters to a Young Pastor, Eugene commends his son Eric for so often describing a congregant’s death in old age as “the completion of her baptism.” There is beauty and theological truth to this proclamation. It is a truth that unites saints of all ages as Christ’s baptized people. Congregants of all ages say, “I too am walking the narrow path, as did my departed sisters and brothers before me.”

By now, I’ve been at my church for 14 years. I served for a couple of years as the youth pastor, and when the pastor left, they turned to me, all of 25 years old. As Abbey Bartlet of West Wing fame says, “I was barely even born yet.”

In those days when I was introduced to folks in town, the refrain was always, “He’s too young to be a pastor!” Now, at 38, I look the part, though many parishioners are quick to remind me that a 38-year-old has nothing to complain about. Be that as it may, I am increasingly reminded by the topographical road map slowly etching itself on the back of my hands that my time also approaches—death and resurrection day with it.

The fact that death is hunting me doesn’t bother me so much. Watching the people I love die is much worse. My first wife, Danielle, “completed her baptism” in 2014 at the age of 30. It is her death that leaves me no choice but to tenaciously cling to the resurrection from the dead in my preaching and writing.

But there is more to it. My church is the result of two 160-year-old neighboring congregations merging together. This is a project I undertook partially because I was a widower with time on my hands. I also did it because one congregation was dying and the other wasn’t too far behind. The result is a newly resurrected church from the death of two beloved, historic congregations. We are reminded that if you want life, it comes only through dying to self and being united with Christ (Matt. 16:24–25). He makes all things new—churches and people too (Rev. 21:5).

The merging of two historic congregations in a small midwestern town has resulted in my presiding over more than 100 funerals to date. If I was completely honest, I would admit that they are all increasingly painful for me to bear. I know what it is like to lose one’s love, to stand by her casket and shake hand after hand with nothing to say and nothing received.

But after 14 years with the same small congregation, a beautiful thing has happened. I have grown to know and love these people, and as I scan the sanctuary every Sunday, I know that I am most likely going to bury most of them. However, I do so with the knowledge that the human condition is not permanent and that Easter promises eternal hope and new bodies.

As Isaac Watts put it long ago, “Sorrow and love flow mingled down! Did e’er such love and sorrow meet?”