Political divides are pushing US pastors back to the core convictions of their faith.
Kate Shellnutt
español 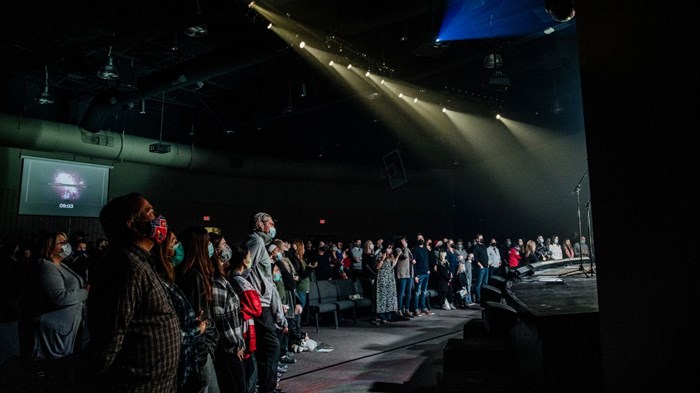 Before the January 6 uprising at the US Capitol put the country’s unrest on display, many evangelical leaders in the US saw signs of the escalating tensions from their own pulpits, deepening their call to preach and teach a gospel that puts God over country.

Nine months ago, Texas pastor Brian Haynes got a text message from a member of his congregation who noticed fellow believers sharing conspiracy theories online and felt “overwhelmed by the amount of fear and disunity.”

Haynes, lead pastor of Bay Area Church outside Houston, wrote a 500-word response and posted it on his blog. When the post got 200,000 views in a matter of days, he realized just how big the issue had become.

“I’ve really had to seek wisdom for it. As a shepherd, how do I love these people who I think are believing something that is a lie?” said Haynes. “It’s been very exhausting for pastors. You either just said, ‘I’m not dealing with it,’ or you leaned into it. I’m leaning into it.”

He has had conversations with members of his 1,500-person congregation about COVID-19, masks, and Dr. Anthony Fauci; Southern Baptist leadership and Russell Moore; and QAnon and the presidency. He’s also addressed misconceptions in his preaching and teaching.

And over the past year, Haynes’s approach to pastoring has been transformed. Basic convictions that he believed all along—about leading people who agree on the essentials even if they differ on other issues and prioritizing an eternal perspective—became paramount.

“Kingdom has become forefront for me. I would’ve always winked at kingdom thinking, but now I realize we really have to have our eyes set on King Jesus,” he said. “If we’re kingdom-focused, and we have a King that lasts forever and a throne that lasts forever, then transitions of power and politics, and masks or no masks, all that stuff shouldn’t throw us. It might bother us or frustrate us, but we should be the calm in the room.”

Pastors will tell you that ministering across political divisions—something the church has been charged with since the days of Paul—is practically part of their job description. But that responsibility took on new weight and urgency as America’s political landscape shifted over the past year.

At the Washington, DC, Christian Reformed Church, the shift in the political tenor hits close to home in a congregation filled with Christians who work with and for the government.

Pastor Meg Jenista Kuykendall spent the afternoon of January 6 getting in touch with church members who live and work on Capitol Hill to ensure they were safe. She’s spent many mornings calling and praying with congregants whose jobs or agencies were threatened by changes under the previous administration.

While Jenista Kuykendall has not had to address conspiracy theories within her church, their hold among the larger body of Christ still hurts. It’s hard to hear people malign or twist the work of the government when she can see firsthand the faithful public servants who feel called to Washington to serve the common good.

“We are not immune from the fractured relationships across ideological divide, and I am defensive when I see those snide, dismissive comments directed by Christians in other parts of the country at Christians in my congregation,” she said.

The recent concerns over Christian nationalism and its role in the Capitol attack focus on the political rancor at a national level, calling on the church and country at large to work toward the buzzword of “unity.” But the divides do not show up uniformly across congregations, putting individual pastors in the position of assessing how to respond.

“Pastors have the responsibility to have those conversations with church members. What the members of my church need to hear might be different than what your church needs,” said Jonathan Leeman, editorial director of DC-based 9Marks and author of How the Nations Rage. “Jesus set it up that way.”

Leeman said the forces fueling the Capitol attack were a “crescendoed version” of the kind of political division the church has always faced and strived to overcome. “It goes to the heart of political disagreement among the saints in general: Is this an issue which I can disagree and still come to the Lord’s table with them?” he asked. “Disagreements between Christians become divisive when we don’t make a distinction between ultimate things and important things. Satan loves to tell us that the political things that divide us are the most important things in the world.”

Polarization in America and its churches has been growing for decades, with the Trump presidency and the coronavirus pandemic adding to the tensions at “purple churches,” whose members span political parties. Being in such church contexts is not an instant fix to change minds or overcome divides, but experts say it is helpful for bridge-building over the long term.

“It’s not just about [addressing politics in] a sermon series or a Sunday school class,” said Kaitlyn Schiess, author of the Liturgy of Politics. “You can have conversations in a low-tempo, Scripture-centered environment, rather than in a heated political context. You might be waiting a year to have that conversation.”

Rick Langer, a former Evangelical Free Church pastor and director of the Winsome Conviction project at Biola University, approaches differing convictions in the body of Christ as “not a bug but a feature” and part of God’s intention for his people.

The project coaches Christians toward “tracing” and “thickening” their convictions—looking for common ground at the heart of issues and better understanding why others come to different conclusions. But lately, certain conspiratorial thinking and distorted views of truth and reality have posed a new challenge.

“The Winsome Conviction project is more concerned with how we talk about our different convictions than speaking a prophetic word against a particular kind of personal persuasion, so this is a little bit at odds for me,” he said. “But I feel like at this moment I can’t but say, ‘Look, this isn’t just another different viewpoint. There’s something that’s going off the rails here.’”

He worries about distrust, confirmation bias, and the slipping authority of absolute truth. It’s become even more crucial that Christians in the center work toward getting along better while being willing to address distorted claims being made on the edges.

“There’s some calling out and then there’s a huge realm of occupying the respectful mutual territory,” he said.

The claims in question include beliefs about the threat of the coronavirus, the outcome of the 2020 presidential election, and the validity of QAnon (a movement that believes former President Donald Trump will reclaim government power from sex-trafficking liberal politicians and celebrities).

“We’re the people who should be able to say when some things are true and false,” said Schiess. “We can have disagreements about presidents and policies, but to act as if a totalizing narrative about good and evil in the world is not a threat to the gospel and the Christian community?”

In the weeks after the election, Schiess recalled how navigating difficult political conversations with their families had been the top prayer request from women in her community. “I’m so dang proud of them for wading into hard conversations because they know it’s worth it, and for doing it with grace,” she said.

The influence of conspiracy theories cropped up in questions to leadership, prayer requests, and social media posts, particularly over the past year, so much that half of US pastors say they frequently heard conspiracy theories from their own congregations, per a Lifeway Research survey.

Because of their size, bigger congregations are also more politically diverse and therefore less likely to discuss politics, according to megachurch researcher and Hartford Seminary sociologist Scott Thumma.

It’s a tricky dynamic. For some pastors, steering away from explicit political issues is a way to avoid conflating faith with a certain party or position, challenging congregants to focus on their identity in Christ rather than political stances. But Christians have also seen how a lack of discipleship around political issues has made way for outside influences that can distort views of God.

“A significant challenge moving forward is going to be getting pastors to stop abdicating their responsibility for discipling the public life of their church members. Too many pastors take pride in saying, ‘I don’t preach about politics,’” said Jenista Kuykendall in DC. “But what I hear in that is an abdication to take responsibility for the discipleship of Christians who vote and protest and sign petitions and serve on local school boards … if we don’t talk about what it means to love God in public, there are 24-hour channels and blogs and conspiracies that will gladly speak out over our silence.”

It’s also an intentionally multiethnic church. Foster believes their robust theology around the ministry of reconciliation has helped keep Grace Church on common spiritual ground even when they disagree on politics.

“Our faith rests in Jesus Christ. What I try to talk about is the unity Christ died for and him being the one who removed hostility in breaking down the wall between Jew and Gentile,” said Foster, who became Grace’s first black senior pastor last year. “Most of our folks understand the vision of the church well enough that they don’t see it as something to be sacrificed” over politics.

He also relies on the liturgy to lead the congregation in lament as they mourn incidents of violence in the country and pray for the work of the country’s politicians. “One of the things that helped with responding without being overly angered or overly nationalistic is that we’re in constant prayer for our leaders,” he said.

The liturgy—along with Scripture and church history—reminds Foster that unity and peace in God has the power to change a people. He turns to examples from the Book of Romans and the witness of Lemuel Haynes, Harriet Beecher Stowe, and Martin Luther King Jr.

“Although the situation has worsened,” he said, “there’s a greater opportunity to project hope.”

Haynes, in Texas, is focusing on the church’s role as peacemakers, ambassadors of heaven called to broker peace here on earth. But before Christians can become a model of bridge-building and unity, they have to return their focus and ultimate priority to the one who unites them.