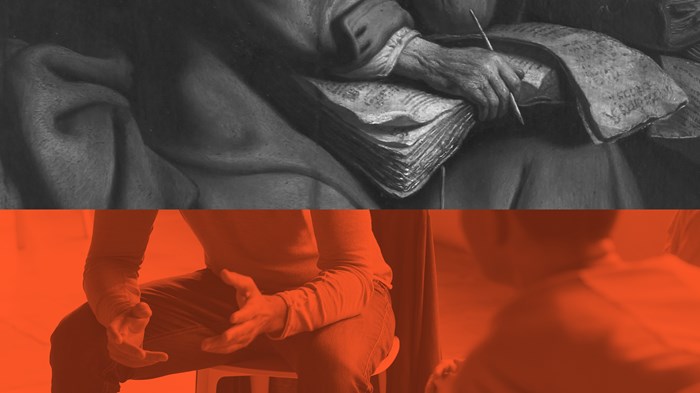 I had been living in Germany for six months and was struggling to learn the language. I did fine with ordering groceries or buying a bus ticket. But I couldn’t tell a joke. I couldn’t share a story or a hope. I couldn’t make a friend.

Thinking that a different language school might help, I called a new school in our small university town of Tübingen and immediately spoke with the director. She slowly talked me through directions to the school in German and invited me for the placement test. When I walked in a couple days later, she greeted me by name. She remembered my voice, my accent. In fact, she knew everyone’s name. She greeted everyone with the same joy that brought immediate trust.

It was the first time I heard how beautiful German can be. There was a kindness to it. I knew that if I watched her, I would find a way to sound out joyfulness and gentleness in this new language. I saw in her a version of myself—or at least the version I wanted to be.

Effective mentoring is similar to learning a new language: It involves an intentional practice of imitation. It’s a relationship that offers a return to listening first, nurturing curiosity, developing new skills, and embracing trial and error until one day you find a version that fits.

People often seek out a mentor in a time of transition when they need to develop a new skill or job or are uncertain about their future. The mentor becomes a unique kind of friend who knows the mentee’s before and after—and often the messy in between. Mentoring is a form of friendship offering us a reminder of who we are while providing continuity with who we are becoming to meet the needs and demands of a new context.

In the church, mentoring is crucial to leadership development—not just for up-and-coming leaders but also for the ongoing growth and sustainability of those already serving as ministers. For pastors, mentorship is often most effective when it comes from a fellow minister or leader outside of one’s own church context. This mentorship can serve as a unique form of discipleship for pastors, asking both participants to begin from a place of generosity.

But mentoring in the church can also go seriously wrong. The danger comes when the desire for excellence and the fear of failure lead to mere memorization and mimicry. Take that approach and one may learn some of the language, but he or she will lack the creativity and flexibility needed to ever actually live in it.

In the business world and, unfortunately, in some Christian contexts, mentoring looks a lot like an extension of networking. It’s a process of finding out what one person can do for another. Your mentor pulls strings for you, advocates for you, and gives you advice. Some church succession plans based on this model of “mentorship” involve an inheritance of power. Power or influence is conceived as something passed down and handed over. Mentorship is then about control and ambition rather than a friendship that encourages vulnerability, authenticity, and growth.

There’s nothing necessarily wrong with that in some workplace contexts, but in the church? This networking approach to mentoring doesn’t ask us to look at power any differently. It doesn’t ask us to lay our burdens down, pick up our crosses, and follow a Savior who gave himself for us freely.

True mentorship can offer something much better than access to power. One of the first uses of the word mentor comes from Homer’s Odyssey. In the epic, Odysseus’s old friend Mentor watches over Odysseus’s son Telemachus while he is away. The goddess Athena impersonates this old family friend to give the young Telemachus the courage he needs for his own journey.

I often talk about this example with the mentoring cohorts I help organize for ministers and recently graduated seminarians at the seminary where I work. In this example, I explain, we find that a mentor is someone who helps another take his or her first steps in the vocational journey. The mentor helps the mentee find courage.

The mentor comes as a friend. Old Testament scholar Walter Brueggemann writes that if mentoring is successful, it will open the way for mutual learning. The two people will be connected in friendship and vulnerability, each able to learn from the other, and in that connection they will be able to imagine a “new social reality” together.

I saw this recently when a senior minister in midcareer said yes to mentoring a new minister who was just starting out in a church across the country. Both mentor and mentee found themselves asking similar questions around worship, preaching, and discipleship during the pandemic. Together, in conversation with each other, they started making changes in their respective churches to adapt to the needs of the moment. The ministers slowed down, tried new things, and allowed trust to lead the way. They shaped each other’s imagination and in turn saw their congregations through new eyes.

Mentoring actually teaches us how to not be in control or grasp at power when life circumstances are asking for change. But learning this takes practice, and according to the apostle Paul, it also requires imitation.

It’s hard for me to imagine my life today without other friends in ministry who have mentored me along the way. For as long as I can remember, I’ve had good friends point out truths to me about myself. Friends in ministry can remind us that there is nothing we could ever do to get this call, this work, but that once we’ve received God’s call, we get to keep participating in a lot of good work. Each of us gets to add our own style, our authentic voice, while also holding continuity with the larger context of our call: the mission of the church.

We consistently see this theme of friendship and mutual encouragement among leaders in the Pauline letters. Paul liked people. We often focus on the corrections Paul offered, forgetting that he spent most of his time telling people that God was on their side, regardless of their circumstances. We see this especially in Philippians.

The believers in Philippi were close to Paul. They sent him food and resources and prayed and worried about him. In return, Paul writes a letter from prison about joy. Before he gets to thanking them, he writes, “Join in imitating me, and keep your eyes on those who walk according to the example you have in us” (3:17, ESV). We find this same invitation to imitate Paul and follow his example in other Pauline letters (1 Cor. 4:16; 11:1; 1 Thess. 1:6).

Significant New Testament scholarship in recent decades—including works like Paul and First-Century Letter Writing, Paul, the Letter Writer, and Paul the Ancient Letter Writer—has discussed how letters were composed and communicated in an oral culture. While we may tend to think of letter-writing as a solitary act, Paul wrote in community for communities. It’s very likely that the letter-writing process involved a practice of imitation in which the letters were delivered as a performance, likely by people who had observed Paul in composition. They learned Paul’s mannerisms and tone. They likely mimicked his body language to go along with certain maxims. They imitated him.

Scholars Sylvia Keesmaat and Brian Walsh help us think about how this practice of imitation could have repeated itself in Christian community in their new commentary Romans Disarmed. They imagine how Roman believers would meet in kitchens, one performing the letter to another, expounding on it and explaining it until, over time, the next person could relay the message. Keesmaat and Walsh say we should see each of these letters as something that was not received once by one particular group but received and then performed again and again with time for questions and further explanation. The text was conveyed in community, modeled in a way that created relationships. Each letter offered Paul as an example to follow—but the example breathed.

New Testament scholar Elizabeth Shively points out that in Philippians, the word Paul uses for example is the word Greek word typos, which can also mean a seal or a stamp. “Jesus Christ is the archetype,” she writes, “the typos that made an imprint on the life of Paul. This is a certain kind of living that requires a certain mindset: not asserting your own rights, considering the needs of others as more important than your own.”

What happens when a mentor sees the needs of others as more important than his or her own? If we look at Paul as a model for a Christian mentor, we find someone who was constantly taking off the mask to reveal the true archetype: Jesus Christ. And when others stood up to perform his words, they were imitating Paul imitating Christ.

The ability to trust

That kind of mentoring relationship among ministers in our churches offers the same kind of transformative power: the ability to trust while not being in control. That’s Christian mentoring.

As with Paul, it’s the power to give up power. It’s the ability to step out of our siloed ways of thinking, imprisoned by our thoughts of what we have to lose and what we pretend to control, so that we can write a letter that others can perform. It’s God’s good news revealed as our imitating Christ. Maybe some of the mentor’s mannerisms of joy will still be left over in the imitation. Maybe others will learn, in their own accents, to give simple directions to a place where people can each be greeted by name.

Good mentors never settle for the imitation of themselves. Ultimately, a good Christian mentor trusts the mentee to provide, in return, a picture of Christ.

“I thank my God every time I remember you,” Paul tells the Philippians (1:3–5). “In all my prayers for all of you, I always pray with joy because of your partnership in the gospel.”

The central element of mentoring is the act of practicing collaboration and trust. This is a trust that produces generosity. With generous minds, we can always imagine the friendship continuing. We can see the limitless journey of the church and hear the new voices of those sounding out a joy that is both familiar and new.

Beth Jarvis is the director of the Ministry Resource Center at Milligan University, where she helps ministers connect with each other to thrive in ministry. She is an ordained minister and holds an MDiv from Emmanuel Christian Seminary at Milligan.

Preaching
Wendell Berry Taught Me to Preach
Lessons from “How to Be a Poet.”
Ryan Diaz