5 Kinds of Moral Grandstanding, but not one is foolproof
Scot McKnight

Let’s remind ourselves of what moral grandstanding is. Justin Tosi and Brandon Warmke, in their new book, Grandstanding: The Use and Abuse of Moral Talk, define it this way:

Grandstanders want to impress others with their moral qualities. We call this the Recognition Desire.

Grandstanders try to satisfy that desire by saying something in public moral discourse. We call this public display the Grandstanding Expression.

It happens. No one can really deny that at times people are making moral statements to impress others of their own virtue.

But how do we detect grandstanding? Can we? I’d say – they’d say – sometimes, but not always. They provide a “field guide” to grandstanding by looking at five types, but the Expression of each is not a necessary indicator. This is not a detection list and it’s not a test either.

For each they have a few paragraphs of explanation and nuanced backing off from equating a public expression, say ramping up, with grandstanding. Still, those who find themselves doing more and more of each of these are most likely to be grandstanding.

Sometimes moral talk seems to follow the model of the long meeting. People chime in on discussions of moral issues effectively to say nothing more than “yeah!’ We call this phenomenon “piling on.” As the name suggests, it occurs when someone contributes to public moral discourse to do nothing more than proclaim her agreement with something that has already been said. When people grandstand by piling on, they are just trying to get in on the action or register their inclusion on the right side. They can do this in any number of ways. Someone might pile on by rehashing someone else’s earlier remark, by repeating it word for word, or simply by noting that she agrees with what everyone else has been saying… Grandstanders who pile on in such cases are trying to make clear that they are on the Correct Side. … If you go out o your way to sanction people who have the "wrong view,” you make a more convincing case that you are a true believer. The result is a “self-reinforcing dynamic”: people defend views to avoid criticism and then criticize others to avoid suspicion of insincerity.

It involves shaming someone, and one noticeable example is how many people piled on when John Piper tweeted “Farewell Rob Bell.” I have often called piling on “crowdpounding.”

Of course, this has to do with group identity and making it clear someone belongs smack-dab in the heart of the group.

Piling on is Agreement. Ramping up is about Intensifying one’s agreement.

Moral talk often devolves into a moral arms race, where people make increasingly strong claims about the matter under discussion. Call this ramping up. When people ramp up, they are not trying to arrive at the correct moral claim any more than the Soviets and Americans were trying to produce the correct number of bombs. Instead, they are trying to outdo one another. What drives them is the desire to be the most morally impressive. So they use increasingly strong moral claims to signal that they are more attuned to matters of justice, and that others simply do not understand or appreciate the nuance or gravity of the situation.

From Agreement to Intensification to Going Over the Top with trumping. (They footnote “No relation”.)

Yet some people attempt to establish their moral credentials by displaying a similar degree of sensitivity to moral problems. Often this results in spurious claims about the presence of a moral problem where in fact there is none…. . Trumping up is a useful tool for grandstanders. By trumping up, grandstanders try to look morally impressive by objecting to features of the world that we moral peasants regard as insignificant, innocent, or even laudable. 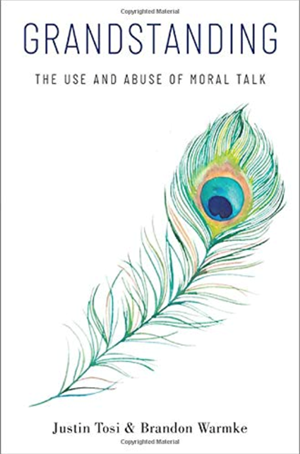 Our technology for displaying anger has improved since then. We don’t need to yell out our windows to experience shared outrage. Now virtually everyone, at any time, has a forum to vent their anger. As of March 2018, there are 1.45 billion daily active Facebook users. They post roughly 684,000 pieces of content every minute. There are 330 million monthly active Twitter users. They post about 500 million Tweets each day. Social media platforms make it easy for anyone to express outrage at the latest political dust-up or celebrity gaffe.

Outrage assuages our guilt. It is about being complicit in something and our own seeking alleviation. It also makes us feel better about ourselves and our own moral virtue. Take evening cable news: one study showed 89.6% was outrage material.

Dismissiveness is an indirect claim to moral superiority over others. Things like “utterly obvious” or “of course” or “SMH.” These dismiss others.

Join the conversation on Facebook
Tags:
None
Posted:
August 6, 2020