The best approach to context is specifics, not theory
Scot McKnight

Baker Academic summary is the best way to begin this blog post:

This beautifully designed, full-color textbook introduces the Roman background of the New Testament by immersing students in the life and culture of the thriving first-century towns of Pompeii and Herculaneum, which act as showpieces of the world into which the early Christian movement was spreading. Bruce Longenecker, a leading scholar of the ancient world of the New Testament, discusses first-century artifacts in relation to the life stories of people from the Roman world. The book includes discussion questions, maps, and 175 color photographs. Additional resources are available through Textbook eSources.

When I was in college I wandered across a saying by Johann von Goethe in a book about the history of interpretation by (I recall) F.W. Farrar. It went like this: “Willst ein Dichter Du versteh’n, musst in Dichter’s Lande geh’n.” Which being translated means “If you want to understand a poet, you must go to the poet’s land.”

I’ve long yearned my students would experience enough of 1st Century Judaism and the Greco-Roman world so they’d study it more on their own. Read the texts, smell the air, wander through the ruins, learn the language… that sort of thing.

It’s way too easy, and not as profitable, for a student to use a dictionary or a textbook that scans the whole of the ancient world. I’m looking at you Everett Ferguson. 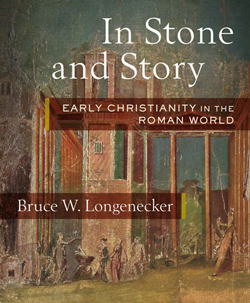 What Bruce Longenecker has now written – summarized in the quotation above – may be the very best way to introduce students to NT Context. His book is called In Stone and Storyk: Early Christianity in the Roman World.

Bruce has mastered Pompeii and he uses the material realites of that world to shed light on the historical realities of early Christianity. In this sense, “less is more.” The less is Pompeii, the more is thickness of explanation. I love this book.

What is covered? A sampling of chps:

I can’t think of any pastor who wouldn’t profit from reading this new book; nor any professor; nor any students.

Join the conversation on Facebook
Tags:
None
Posted:
February 19, 2020