Law -- positive law -- is examined in a Christian framework by this professor of law who has a PhD in theology.
Scot McKnight

How do these two sense of “law” work together?

That is one of the many questions at work in David W. Opderbeck’s new book, Law and Christian Theology: Classic Questions and Contemporary Perspectives.

David is well-known to this blog for his former contributions and comments. But he has now added to his law degree and professorship in law a degree in theology from Nottingham.

As a young professor I remember hearing a Hebrew Bible professor discuss the laws of Israel as a constitution and thus the laws were not unlike contemporary laws. Since then I have always tried to keep that larger constitutional perspective in reading what the Bible says about law as covenant obligation for Israel. However, few have been the books that crossed my desk that seriously took up the discussion of how the Bible's law emerges into or relates to contemporary law -- natural, positive -- and how Christians relate to laws of the land. David Opderbeck offers to Bible professors as well as to pastors and serious readers a full-orbed discussion of law in the Christian tradition. The book will generate much light and many discussions. 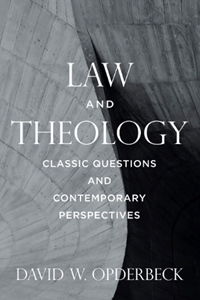 It has two sections: Theology, which covers the narrative of Scripture and how law fits into it, a chp on the law in history, and then a constructive theologiy of law after modernity. The second section, Praxis, which covers the praxis of law in ordinary time, slavery and race, and then abortion and LGBTQ rights.

The focus of this book is on “positive” law, that is, how common law (or how humans inchoately learn to live with one another) forms into positive laws that emerge consciously, intentionally, and locally. More or less (unless I’m mistaken), divine law can be discussed along with positive law. Positive law is to be distinguishes from “natural” law, which he as a Christian, sees at some level born into the essence of who we are as made in the image of God.

Here’s a fundamental idea of Opderbeck’s:

Opderbeck approaches Scripture with a keen eye to all discussions among evangelicals. His approach is to sketch the narrative of Scripture with a view to where law fits and how it fits. This opening chapter is admirable in breadth and helpful in orienting us to how law fits into the narrative. Esp when performed by someone like Opderbeck who understands law in its modern legal framework.

From beginning to end, from Gen 1 to Rev 22, law is part of the Bible’s narrative. It is neve shaken loose. Here are the major themes of his first chapter:

The “natural law” is built into creation; legal relationships between people, tribes, and nations help secure peace; and God establishes his people through a legal code after they have been freed from the injustice of Egyptian slavery. God judges his people when they ignore the law, particularly the law’s requirement of justice for the poor and oppressed. Jesus fulfills the law and restores justice for the community of Israel, and Paul explainshow that justice extends not only to Israel but the gentiles and the whole cosmos (67).

It seems, at one level, that all is well. But there are wrinkles in this law in Scripture study.

Some of the specific laws in Leviticus and Deuteronomy [and Exodus and Numbers], read naively at face value, seem strange and harsh to modern ears. The narratives of conquest of Canaan in the Old Testament are to difficult to understand in light of what we might think about natural law, justice, and international law today. The New Testament’s critique of the Roman Empire seems to counsel withdrawal from the world, including from any sanguine assessment of the positive law, except for Paul’s otherwise strange and perhaps subtly subversive [he uses Barth here] admonition to respect the ruling authorities in Romans 13.

The point for us today, for positive law?

These complications counsel us to exercise caution about using any specific biblical text as a proof text for positive law today. Nevertheless, the broad narrative arc of the canon of Scripture suggests that “law” is central to the missio Dei.

Join us for this series with David Opderbeck’s book.

Join the conversation on Facebook
Tags:
None
Posted:
January 28, 2020