During the decades I lived in an integrated neighborhood in Grand Rapids, with black families my closest neighbors, and later working alongside a black business partner, I never heard Martin Luther King, Jr. called anything other than Dr. King. It’s us white folks who give him the long handle. African-Americans honor him with three syllables only. His father was granted three syllables as well—Daddy King.

In his biography of Dr. King, Richard Lischer writes graphically about Daddy King: “A member of the lowest caste of rural Negroes (his schoolmates had taunted him unmercifully for smelling like a mule), he set his cap to marry the princess of Ebenezer, the boss’s daughter, Alberta Williams.” And that is precisely what he did. “A poor man with dung on his boots,” he would follow his father-in-law as the minister of Ebenezer Baptist Church. The church grew under his leadership, and in 1934, he was honored with a sabbatical excursion to Europe, Africa, and the Holy Land.

In Germany, inspired by the leadership and legacy of Martin Luther, he decided to legally change his name and that of his five-year-old son. If a mere monk could change the course of religious history, so also could an up-and-coming black preacher in Atlanta. From that point on he would no longer be Mike. He would be Martin Luther King, his son, junior. Indeed, from the time he was a child, the boy was destined to become the fourth in a line of preachers. 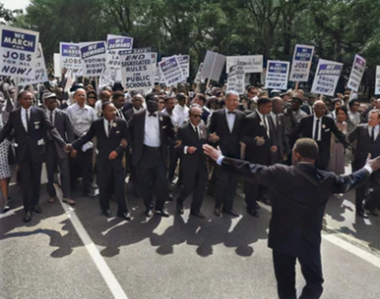 Image: Photo by History in HD on Unsplash

Dr. King would become a truly great leader—though it was leadership he did not seek. “Like many prophets in the Bible, King did not aspire to the kind of leadership he finally undertook,” writes Garry Wills. “He would gladly have fled the task, like Jonah. But the task pursued him. . . . Reluctant to go to jail, he was shamed into going there after so many young people responded to his speeches and found themselves in danger.”

In many respects Dr. King was not even the visionary that leadership gurus insist is a necessary requisite. He borrowed his ideas—and his rhetoric—from others. In fact, his most famous lines were borrowed. More than a decade before his “I have a dream” speech, Archibald Carey, another black preacher, had called people to action with virtually the same words that King later borrowed:

He sounded the clarion call, but he didn’t want to lead the fight. He tells how he had reminisced on his life the evening after he had been released from the Montgomery city jail. As he sat at the kitchen table, long after Coretta and his little girl had fallen asleep, he pondered the previous night. He also thought of his wedding night. With no accommodations open to African Americans, he and Coretta had slept at a funeral home belonging to family friends. But on this night, he sensed God speaking to him:

And I sat at that table thinking about that little girl and thinking about the fact that she could be taken away from me any minute. And I started thinking about a dedicated, devoted and loyal wife, who was over there asleep. . . . And I got to the point that I couldn’t take it anymore. I was weak. . . . And I discovered then that religion had to become real to me, and I had to know God for myself. . . . I prayed a prayer, and I prayed out loud that night. I said, “Lord, I’m down here trying to do what’s right. I think I’m right. I think the cause that we represent is right. But Lord, I must confess that I’m weak now. I’m faltering. I’m losing my courage.” . . . . And it seemed at that moment that I could hear an inner voice saying to me, “Martin Luther, stand up for righteousness. Stand up for justice. Stand up for truth. And lo I will be with you, even until the end of the world.”

Dr. King’s legacy is well known, his massive footprint evident the world over, summed up by countless stories of his profound influence. One of these stories is told by Philip Yancey. Born in 1949 in Atlanta (Dr. King’s hometown), Yancey’s neighborhood was a world away. Accounts of lynchings were still part of local lore—stories and scenes of black men lynched because, as young Philip was told, they deserved it. He had it coming. The girl was caught in a parked car. She was mortified and then claimed he raped her. If a mob went berserk and strung him up from a tree limb, he had it coming.

These were very real scenes and stories that terrorized Dr. King in his waking and sleeping hours. Although Yancey’s own family was very poor and lived in low-rent housing and trailer parks, they were white. That was enough.

We ate in different restaurants, played in different parks, and attended different schools and churches. . . . Our governor called for the Georgia Tech football team to forfeit their Sugar Bowl game invitation in 1955 when he learned that the opposing team, Pittsburgh, had a black player on its reserve squad.

It was not uncommon to see signs that read, “No dogs or Coloreds allowed.” Lester Maddox was a religious role model—Maddox of fried-chicken fame who kept blacks from dining at his restaurants with ax handles and a .32 caliber pistol—Maddox, a hero in the eyes of young Philip Yancey. He stood for law and order, particularly in protecting the purity of white women. “The Ku Klux Klan,” writes Yancey, “had an almost mystical hold on our imagination. I wrote school papers about it. It was an invisible army, we were taught, a last line of defense to preserve the Christian unity of the South.”

Today Yancey speaks with conviction against racism and for his appreciation of Dr. King. He makes no effort to turn him into a super-saint. Indeed, he recognizes his failures and places him alongside those recounted for their faith in Hebrews 11—flawed leaders such as Noah, Abraham, Jacob, Rahab, Samson, and David.

I certainly once dismissed him. Yet now I can hardly read a page from King’s life, or a paragraph from his speeches, without sensing the centrality of his Christian conviction. I own a collection of his sermon tapes, and every time I listen to them I am swept up in the sheer power of his gospel-based message, delivered with an eloquence that has never been matched.

When Dr. King died, a song was on the lips—a song written by a black man who had encountered similar racism a generation earlier. Like Dr. King, Thomas A. Dorsey was a flawed man, but he left a legacy in song, one in particular that will never be forgotten. Dr. King’s last words at the Lorraine Hotel in Memphis were reportedly spoken to the musician scheduled to play at an evening event: “Ben, make sure you play ‘Take My Hand, Precious Lord,’ in the meeting tonight. Play it real pretty.”

Lead me on, let me stand

Lead me on to the light