The Gospels were read for formation
Scot McKnight

They didn’t have their NIV or NRSV or CEB ready to hand, in other words. What they had was their memory or friends to ask.

But what they did have was a reading community. Helen Bond’s The First Biography of Jesus examines not only the author but the make-up of the reading community, and she turns over some very interesting stones.

Think of them in a room, in an atrium or outside in a small group or circle listening. A paragraph or two is read, it is put down as people ask questions and probe. Don’t think of a pulpit and a sanctuary or an auditorium.

First, the Gospel of Mark was written for Christians who knew the lingo. It was clearly connected to the story of Israel and hence to Judaism and the Jewish sacred texts. Yet, Mark has to explain some Jewish customs:

(For the Pharisees, and all the Jews, do not eat unless they thoroughly wash their hands, thus observing the tradition of the elders; and they do not eat anything from the market unless they wash it; and there are also many other traditions that they observe, the washing of cups, pots, and bronze kettles.) (Mark 7:3-4)

Some Sadducees, who say there is no resurrection, came to him and asked him a question (12:18).

These are words from someone who knows Jewish customs for those who don’t, which very much suggests the audience was not Jewish so much as gentile. Hence, too, Bond suggests, the reason for a biography fits that kind of audience a little more. 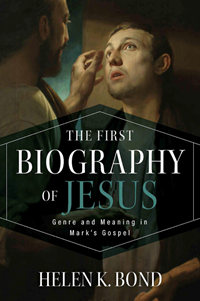 Third, the readings of the Gospel of Mark were formative for the assemblied listeners. This text (1) tells the story of Jesus and (2) does so the “right” way so the assemblies (3) will know the truth about Jesus, the Son of God who was crucified and raised.

Perhaps most importantly, (4) the readings would have estabished a way of life for the assemblies listening to the Gospel being read. In them one would hear both how Jesus lived and how he expected his followers to live, and those listeners would have “applied” those readings to how they lived in their world. (5) The listeners were not passive but participated in the reading: Amens and questions and responses and discussions and debates would have followed readings of the Gospel of Mark.

(6) The listeners become “gatekeepers” of what the Gospel says and thus the “right” view of Jesus and the right way to live becomes part of the assembly listening and responding.

Fourth, the Gospel of Mark was not just for a single community as Helen Bond sides with Richard Bauckham in thinking the Gospel was spread to other assemblies, and we know by early in the 2d Century this text was important to Western Asia Minor.

Join the conversation on Facebook
Tags:
None
Posted:
July 15, 2020