This is a fact: some 80% of white evangelical Christians (who voted) voted for Donald J. Trump. This too is a fact: he not only is not one of them but he flaunts Christianity’s essential teachings and behaviors, and evangelicals both supported him in record numbers and have not criticized him (though it appears to me the tide is turning).

In Kristin Kobes De Mez’s paradigm-influencing study of American evangelicalism, Jesus and John Wayne, the question of “How did evangelicals support Trump?,” is the driving question. The whole books expounds a thick cultural narrative of the decisive dimension of that culture that approved Trump.

Why Trump?, many wondered, including many evangelicals themselves. For decades, the Religious Right had been kindling fear in the hearts of American Christians. It was a tried-and-true recipe for their own success. Communism, secular humanism, feminism, multilateralism, Islamic terrorism, and the erosion of religious freedom- evangelical leaders had rallied support by mobilizing followers to fight battles on which, the fate of the nation, and their own families, seemed to hinge. Leaders of the Religious Right had been amping up their rhetoric over the course of the Obama administration. The first African American president, the sea change in LGBTQ rights, the apparent erosion of religious freedom - coupled with looming demographic changes and the declining religious loyalty of their own children - heightened the sense of dread among white evangelicals.

Evangelicals were looking for a protector, an aggressive, heroic, manly man, someone who wasn’t restrained by political correctness or feminine virtues, someone who would break the rules for the right cause.

Why? How could a movement shaped by biblical faith come so uniformly to terms with Trump? Her answer to this question calls into question the integrity of cultural evangelicalism.

Were they “fake” evangelicals while “true” evangelicals did not support him? (no) Was about an economic motivation, that Trump would stimulate the economy? (no) Was it about status in society that could be restored? (in part) Was it pragmatic so that many held their noses? (no) Was it the promise to appoint the right kind of justices to the Supreme Court? (in part) Was it hypocritical to vote for a person who is “character challenged”? (yes) [SMcK: I think more space cold be given to “never a Democrat” for a significant reason.]

What attracted them to Trump was nothing less that the formation of a militant masculine Christianity.

Evangelicals hadn’t betrayed their values. Donald Trump was the culmination of their half century-long pursuit of a militant Christian masculinity. He was the reincarnation of John Wayne, sitting tall in the saddle, a man who wasn’t afraid to resort to violence to bring order, who protected those deemed worthy of protection, who wouldn’t let political correctness get in the way of saying what had to be said or the norms of democratic society keep him from doing what needed to be done. Unencumbered by traditional Christian virtue, he was a warrior in the tradition (if not the actual physical form) of Mel Gibson’s William Wallace. He was a hero for God-and-country Christians in the line of Barry Goldwater, Ronald Reagan, and Oliver North, one suited for Duck Dynasty Americans and American Christians. He was the latest and greatest high priest of the evangelical cult of masculinity.

Such a view worked back into reshaping Jesus himself. A warrior, militant, man’s man Jesus was created in the process. A John Wayne Jesus, and Du Mez surfaces dozens of connections evangelical leaders have made in the last half century to John Wayne (Who knew!).

This Jesus was over half a century in the making. Inspired by images of heroic white manhood, evangelicals had fashioned a savior who would lead them into the battles of their own choosing. The new, rugged Christ transformed Christian manhood, and Christianity itself.

Weaving together intimate family matters, domestic politics, and a foreign policy agenda, militant masculinity came to reside at the heart of a larger evangelical identity….

From the start, evangelical masculinity has been both personal and political. In learning how to be Christian men, evangelicals also learned how to think about sex, guns, war, borders, Muslims, immigrants, the military, foreign policy, and the nation itself.

Evangelicalism must be seen as a cultural and political movement rather than as a community defined chiefly by its theology. 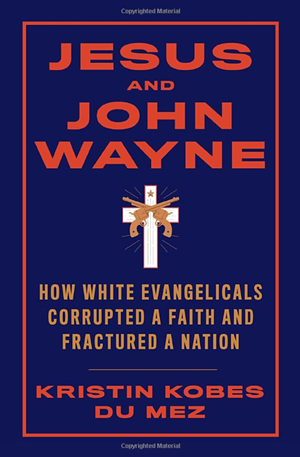 Du Mez’s very readable page-turner (for me) was laced together and buttoned down with sketches of the principal people involved in creating cultural evangelicalism, one that is nothing short of Christian nationalism.

I will give the names who shaped masculine, militant Christian nationalism, each in his or her own way:

These are the folks Du Mez brings forward as the influencers in shaping cultural evangelicalism.

Join the conversation on Facebook
Tags:
None
Posted:
July 29, 2020