Her image is yellow wallpaper, an image in a 19th Century novella by Charlotte Perkins Gilman, The Yellow Wallpaper, and that yellow wallpaper was trapping a woman and her gifts. This is the image Aimee Byrd will use as a metaphor in her wonderfully titled Recovering from Biblical Manhood and Womanhood.

Aimee and I don’t walk the same line when it comes to women in the church but we are both staring with open eyes at the same problem: the culture that created and propagated by the Council for Biblical Manhood and Womanhood.

If you are looking for feminist bashing, look elsewhere. That she is brewing a storm among the CBMW folks is a sign of her capacity to get to the point and make it sting a bit. She dwells in a group that is mistreating her for this book, mistreated by males who break down their own theology of grace in how they treat others, especially women. 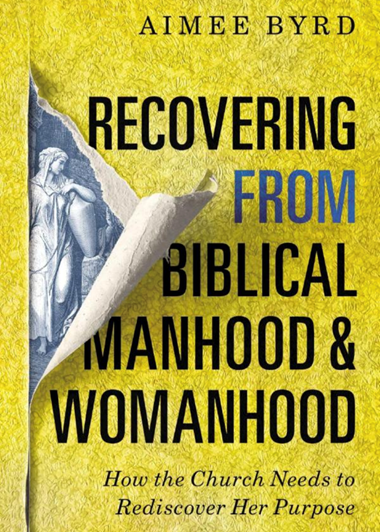 This is a book about culture, about Bible, about theology and about men and women in churches and what it takes for both to be unleashed to serve God in our world well – maximally.

This isn’t a man-bashing book. And this isn’t a woman-empowerment book. This is a book that appeals to the reader to look at the yellow wallpaper in the church and to do something about it. Today the church’s yellow wallpaper manifests itself in much of the current teaching on so-called “biblical manhood and womanhood.” Gilman had her doctor in mind when she wrote her novella. She intended to open his eyes to this problem. But he refused to acknowledge her. I too hope to get the attention of a specific audience -church leaders, the ones entrusted with shepherding God’s people, the ones who can pre-scribe a better approach, the ones who can lead the way forward to a richer culture in God’s household. One of our biggest challenges is to actually see this yellow wallpaper’s scrawling patterns that are stifling the force of the biblical message and strangling the church’s witness and growth. Don’t we want to rip those away and reveal the beauty and unity in God’s Word?

Byrd understands where that culture of CBMW formed, and I can personally say “I was there when it happened.” I remember the days and how some males responded. I remember the earliest days of Grudem, Carson, Moo, Piper … and I remember the gentle murmurings of Walt Liefeld and Ruth Tucker and Grant Osborne.

Yellow wallpaper in the church is either invisible or the desired color. It was the paper of choice by the leaders of CBMW.

We often don’t see the yellow wallpaper because it was established as a hedge against real threats to God’s people. I believe that is the case with a lot of the teaching on biblical manhood and womanhood. The church needed to equip her people to critically engage with the sexual revolution and its message of promiscuity, abortion, and gender fluid-ity. God made man and woman; he instituted marriage to be a unity between one man and one woman; sex is a fruit of this unifying bond; and life is a gift from God. Men and women are not androgynous. Gender is not fluid. And when God created Eve, Adam had to sacrifice for her. Although God can create from nothing, he put Adam to sleep and used one of his ribs in creating Eve. Adam saw that unlike all the other creatures God made, she was suitable for him….

Those were the days and the fear was that they would end. So CBMW.

Man and woman are very much alike. And yet they are also distinct. In wanting to highlight this distinction and to contrast the self serving messages of the sexual revolution, some evangelical leaders began writing about “biblical manhood and biblical womanhood.” One honorable goal was to uphold the value of the family and the sacrifices both men and women make to responsiblylove and serve their families.

Aimee Byrd bought in. She went for it. She read the books and drank the drink.

But I was also confused by some of what I read. Was it my own sinful proclivity, or were some of the distinctives being taught in the book taking things too far? As a young wife, I gave the benefit of the doubt to the authors, who were much more educated and experienced than I. But here I am, no longer a “young” wife, finding myself tripping over some of the teachings in that same book as they have been further amplified and applied. I’ve noticed more and more strange teachings on femininity and biblical womanhood in the last handful of years.

On top of some biblical examinations things got odd. It was like the old rabbinic teaching of having to clarify what “work” on Sabbath meant so they listed the things not to do. So it was with CBMW’s leaders.

Then it got theological. When I first heard the eternal subordination of the Son being taught by Grudem and Ware, I knew something was odd. Or worse. But their crowds loved them and the teaching spread. Aimee Byrd, folks, was one of the first to point this out but the heavies ignored her.

Even when I exposed on my blog that an errant view of the Trinity was being taught and applied to reinforce so-called biblical manhood and womanhood, and a massive debate ensued involving professors, pastors, and laypeople through blog posts, magazine articles, conferences, academic journals, and books, the leaders teaching this errant doctrine never acknowledged or interacted with me. I invited a respectable man to write about it, and suddenly everyone had to pay attention. Leaders were shuffled around as a result, but many of the main concerns were not dealt with. Don’t let the furniture shuffling distract you from the yellow wallpaper in the background.

Here’s the big picture and the implications. I have friends who are complementarians who don’t like the implications (below) but they never speak up, and until they do it won’t change. It will just go underground.

At the heart of mature masculinity is a sense of benevolent respon-sibility to lead, provide for and protect women in ways appropriate to a man’s differing relationships.

At the heart of mature femininity is a freeing disposition to affirm, receive, and nurrure strength and leadership from worthy men in ways appropriate to a woman’s differing relationships.

Here are the implications:

For example, if the mailman comes to the door and a woman answers, he needs to be thinking about how his leadership is affirmed as a man in their interaction. Or if a man is lost driving in a neighborhood and the only person he can find outside is a woman, the book considers how he can ask for directions from her without his masculinity suffering. Another scenario questions how muscular a woman can be and still expect her husband to want to care for her. Do you see the yellow wallpaper here? Manhood and womanhood are viewed through a filter of authority and submission, strength and neediness, and “to the degree that a woman’s influence over a man is personal and directive it will generally offend a man’s good, God-given sense of responsibility and leadership, and thus controvert God’s created order.” Will it?

Is God’s created order that delicate, that a man needs to be careful about whether a woman giving him driving directions is doing it in a personal and directive manner? Do women need to so manipulate their words to be careful not to damage the male psyche if they have something they could teach a man? Does male leadership define my femininity? Is that how a woman is an image-bearer of God?

Join the conversation on Facebook
Tags:
None
Posted:
May 18, 2020