Home > 2010 > April
Fragility and Strength: Or, Can You Believe This Orchid is Still Alive?Amy Julia Becker
expand 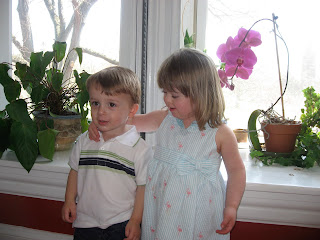 I wrote these lines in August of 2007, when Penny was 20 months old: When Penny was born, among the hundreds of gifts we received was an orchid. And this orchid was like no other orchid we had ever seen. It was beautiful, with dozens of fuchsia blooms. I was intimidated enough by the thought of taking care of it that I called the florist to get instructions. Despite my fledgling green thumb, the orchid bloomed. And bloomed. And bloomed. In fact, it was in continuous bloom for eighteen months. When we left for the summer, there were twenty five blossoms in view with another bud on its way.

Also around the time of Penny's birth, a few people offered us verses from the Bible that had to do with human flourishing, human fruitfulness. They suggested that God intended for Penny's life to be a fruitful one. I saw the orchid as a symbol of Penny's existence, a visual reminder that she is flourishing beautifully, and that she has beaten the odds so far. She, like the orchid, was extraordinary, inexplicable, a gift.

We went away for the summer, to my family's house on the Connecticut shore. I got a call that the person tending the orchid hadn't understood my instructions, and all the blooms had fallen to the ground. At first, I was devastated. Rationally, I understood that I was mourning the loss of a plant, but I had an emotional connection to this plant. This was our "Penny orchid." This was the orchid that would be in bloom forever, just like Penny.

It took me a few days to get a little perspective. But I finally started to reflect upon our summer... And as I thought about Penny—delightful, beautiful, charming, smart, funny, wonderful Penny—I realized that I don't need that orchid any longer. For so long, it had stood as a symbol of my hopes for our daughter. It had even stood as a source of metaphorical protection against all our fears for what might be. But what I realized this week is that I don't need a symbol any more. Penny is flourishing. She is beautiful. She astounds us every day.

I remembered those words today, because Penny had a touch of a stomach bug. She vomited in the night and dry heaved this morning. It turned out to be nothing much. She was eating solid food within a few hours. But it brought me back to the Emergency Room a year ago, when she was so dehydrated from vomiting that it took two nights in the hospital to get her little body stable again. So the stomach bug today, innocuous as it was, still reminded me of her fragility, of how quickly her body can tip into unpredictable territory. I'm reminded of the statistics that tell me she is at higher risk for all sorts of diseases, all sorts of offenses against her body and spirit. I was also looking through our Easter photos today, and I realized that it was almost three years ago that I wrote those lines about our dying orchid. Thing is, that orchid is still alive (see the photo at the top). Against the odds, it came back. Against the odds, it lives. Fragile. Strong. Beautiful. A gift.

Gardening
April 21, 2010 at 3:01 am
To add a comment you need to be a registered user or Christianity Today subscriber.

Fragility and Strength: Or, Can You Believe This Orchid is Still Alive?

Fragility and Strength: Or, Can You Believe This ...