Paul Miller is the author of A Praying Life (click here for my thoughts on this wonderful book) and Love Walked Among Us. He is also the Executive Director of seejesus.net. The following essay includes a few paragraphs from A Praying Life, with new material at the end:

For some reason our daughter Kim (who struggles with autism) has always woken up early, sometimes as early as four thirty. She knows she's not supposed to get up so early, so she'll go out in the hallway, flip on the light, and go back to bed. Five minutes later she'll get up again, turn off the light, and go back to bed, only to repeat the process again and again. When Kim starts pacing on the third floor, Jill or I will tell her to get back in bed. Because we are separated by a floor, our telling sounds more like yelling.

When Jill and I get up to pray, it can really get exciting. Jill prays on the first floor, and I pray on the second floor. Jill is more sensitive to noise than I am, so when she hears Kim pacing upstairs, she asks me to tell her to be quiet. Sometimes I yell at Kim so that Jill won't yell at me to yell at Kim.

In the world of autism, Kim's pacing is called perseverating. It got so bad that we consulted her neurologist, who suggested a drug, which we tried, but Kim just gained weight, so we stopped the drug and went back to yelling!

Not long ago Kim started pacing again in the early-morning hours. I started to get out of bed, and Jill asked, half-asleep, "Are you going to yell at Kim?" I said, "No, that hasn't worked for ten years, so I thought I'd pray with her." Jill started laughing. "What do you mean ten years? It's been twenty!"

I went up to Kim's bedroom, aware that absolutely nothing I could say would stop her pacing. I went quietly over to her bed, laid my hand on her covers (she was pretending to be asleep), and asked the Holy Spirit to quiet her. God heard our prayer. She fell asleep and didn't go back to her pacing that morning.

As soon as I started praying, I suddenly knew something that I hadn't know before: I had underestimated Kim's ability to pray on her own, to connect with God. My view of her had been too narrow. In this area of her life, I'd looked at her as a disabled person and not as a young woman made in the image of God, able to communicate with her heavenly Father. It created a new expectation in my heart for her, a new hope that she can grow spiritually. When she bites her wrist, I can pray with her about it. When I rub oil on her calloused wrist, I can pray with her. Instead of fighting Kim's problems with anger, I can focus on a new vision of her learning to pray.

But Kim continued to pace. About every other time, I'd drag myself out of bed and pray with her. Then four months later, we moved, and her pacing completely stopped. We'd not realized how the diesel trucks at the factory across the street from our old house and the road noise itself were waking her up. Our new house is set back from the road and much quieter. God answered my prayer for Kim. 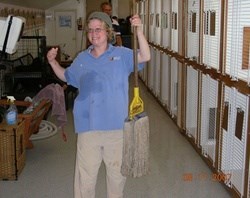 It has been two years since we moved and Kim stopped pacing. I continue to live in this prayer. It has so struck me that to know God (in fact, to know anything – see Esther Meek's book Longing to Know) involves an entering into it. Very specifically, the prayer has gotten wider the longer I've watched it, in much the same way that heaven gets wider the further the children go into it at the end of C. S. Lewis' Last Battle. That new knowledge of Kim, that she can understand spiritual things, has led to us praying together in the morning. Kim and I now have a devotional time together after breakfast. I stopped doing the dishes while she was praying, and now I sit with her while she prays on her speech computer. We are on our second Bible story devotional book. She loved the Old Testament kings because they were always fighting. Every time they would have a fight, she would type out "Charge" on her speech computer. (If you've seen Arsenic and Old Lace¸ then Kim's insight is quite profound. The brother thinks he is Teddy Roosevelt charging up San Juan hill!)

This morning, one of the keys was stuck, so she was pounding her fist after almost every prayer request! So, while pounding her fist, she prayed that God would help her with her anger. I can't tell you how much I love that.

We've also discovered how thankful Kim is. Sometimes half her payer time is just thanking God. Jill commented on it. I hadn't noticed it before, but Kim is remarkably thankful. Opening her heart up in prayer has shown or given birth to a thankful spirit in Kim.

It gets wider still. Kim has started to pray for people on her own. She's telling people that she is praying for them. I see her repenting more quickly, owning her sin.

Prayer
June 16, 2010 at 8:26 am
To add a comment you need to be a registered user or Christianity Today subscriber.

Perfectly Human: The Wideness of Prayer by Paul Miller

Perfectly Human: The Wideness of Prayer by Paul Miller