I have a new post at her.meneutics about the spiritual significance of Williams Syndrome. It is called "The Anti-Racist, Anti-Fear Gene." Incidentally, the title is somewhat misleading as Williams Syndrome involves the absence of certain genes, but that's somewhat beside the point.

Over the past month, NPR has addressed various aspects of Williams syndrome, a rare chromosomal condition in which a series of genes on one chromosome has been deleted.Williams syndrome (also Williams–Beuren syndrome, or WBS) is characterized by learning disabilities and cognitive delays, small physical stature and features, a love for music, and a high degree of sociability and trust of other people, including strangers. One report, "Is There an Anti-Racism Gene?" highlighted the fact that people with Williams Syndrome do not share most people's tendency to discriminate against others of different racial backgrounds. A second report, "A Life without Fear," focused on a family in California with a daughter with Williams, Isabelle. It mentioned that Isabelle is "pathologically trusting" and that it is "biologically impossible for her to distrust" other people. A third explored the social alienation experienced, sadly and ironically, by many persons with Williams in spite of their innately deep love for other people. 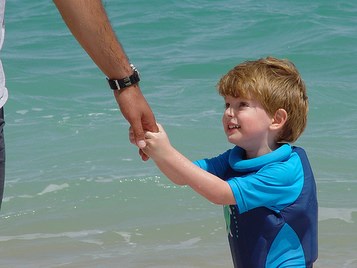 It's a puzzling condition. Positive and even desirable traits of love, trust, and acceptance bump up against the biological fact that we need social fear in order to survive. To cite one example of the problems that arise with this loving, trusting nature, Isabelle cannot go to the bathroom alone at school because of the many stories of children with Williams who have been sexually abused. Isabelle herself has climbed into the backseat of a stranger's car, ready to join the unknown family for a trip to Dairy Queen. Her mother says it is her job to teach Isabelle not to trust people.

Genetics; Racism
May 12, 2010 at 3:56 am
To add a comment you need to be a registered user or Christianity Today subscriber.

Where Does Unconditional Love Come From?

Where Does Unconditional Love Come From?