Home > 2012 > August
Are Kids Sinful?...as the mother of three children, I’ve started to wonder if children are really the best example of the doctrine of original sin...Amy Julia Becker
expand 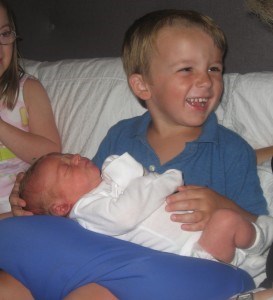 Before going to seminary and then having children, I worked in youth ministry with teenagers for five years. As such, I sat through countless systematic presentations of the gospel in which someone was assigned "the sin talk." These talks varied from camp to camp and speaker to speaker, but a handful of them included a defense of the doctrine of original sin based on the clear sinfulness of small children. It usually began with a reminder of infants crying, demanding attention, and refusing to quiet down until fed. It progressed to toddlers squabbling and shouting, "Mine!" And it concluded with examples of how we as adults or, in this case, teenagers, cry until we get what we want and shout "mine!" though in more culturally acceptable ways. On the final point I can certainly agree: The most obvious case for my sin is my own selfishness.

But as the mother of three children, I've started to wonder if children are really the best example of the doctrine of original sin—the traditional Christian belief that all humans are in an essential state of fallenness and disobedience toward God before accepting Christ's salvation and regeneration. With children as our guide into this belief, I wonder if our understanding of sin itself gets distorted.

To keep reading, head over to my post for her.meneutics: Are Infants Sinful? How Not to Talk About Original Sin

Children; Original Sin
August 22, 2012 at 11:50 am
To add a comment you need to be a registered user or Christianity Today subscriber.