Home > 2012 > May
Can Kids with Disabilities HAVE Friends? by Ben ConnerAmy Julia Becker
expand 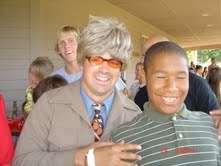 I usually visit Matt during his lunch break in a busy school cafeteria where he sits alone at one end of a long table, clusters of students buzzing with interaction and conversation surrounding him. When I see him at one of our ministry's events or at his house he is confident, witty and at ease. At school he simply looks deflated. "What's the use?" he asks me. The promise of life after middle school, where kids wouldn't tease him anymore, where he would be included and have friends to share the day with, was not fulfilled. In the language of journals, depressive symptoms have been increased in Matt by, "fear of negative evaluation, anxiety, and anger" which "diminishes optimism and self-esteem."(Loneliness Matters in Annals of Behavioral Medicine, (2010) 40:218-227, 219). In his own words, "none of these people want to be my friend." His statement may or may not be true, but Matt feels the crushing weight of his own evaluation, and his experience of failure in relationships has caused him to give up.

Matt has Asperger's syndrome, on the autism spectrum, and has difficulty connecting with others socially. He has a limited range of interests that aren't necessarily age appropriate, has difficulty reading social cues or faces, and his excitement about his own interests often comes across as aggression to his peers. He uses cues from television and video games (mostly put downs) to try to relate to people—which, of course, is not endearing. He once told me that he wishes his brain were a computer so he could stick the right microchip in it and function in a certain way. He loves the cold, calculated logic of computers. Black and white. Right and wrong. This is not the world of relationships. Matt is aware that he is different from the kids in the special education classes who have one-on-one mentors and don't have his intellectual capacity, but he has no idea how to relate to his typically developing peers though he is surrounded by them in mainstream classes and during common breaks throughout the day. Matt is certainly not alone, but he is lonely.

If Matt has to navigate the intimidating and confusing (for him and many others) world of the lunchroom in order to win friends, he will always be disconnected.

Peer friendships are extremely important for mitigating feelings of loneliness—and, as much as I want to fill that void for Matt, I am a 42-year old with four kids of my own and can only be a stranger in the socio-cultural reality that is his high school. When I visit Matt at lunch, I do so as a visitor, I check in at the office, I receive suspicious stares (is he new teacher? What sport does he coach? Is he a narc? What is he doing here?), I wear a visitor tag and I honor the guidelines and policies of the administration regarding visitors and, consequently, have little influence over the way people interact in the lunchroom. 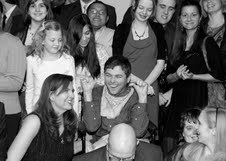 Matt's loneliness does not necessarily issue from a lack of human interaction, but from a lack of meaningful interaction. Who cares to know me deeply? Who calls me on my birthday? Who sits with me at lunch? Who could I possible invite over to play? Too often the extracurricular recreational opportunities for kids with disabilities are with paid service providers or alone with a game system and, possibly, a virtual community of gamers. In general, at school, students have limited opportunities to develop relationships with their typically developing peers—they are often physically integrated but remain isolated socially and emotionally.

Loneliness has a physiological impact such that James Lynch could write about the "broken heart" and document "the medical consequences of loneliness." Focusing on heart disease, Lynch documents how human relationships are essential to our mental and physical well being. But is this true for kids with autism? Do they feel isolated and alone?According to one study (Journal of Autism and Developmental Disorders (2010) 40:218-226), 59% of adolescents with autism spectrum disorder reported either always feeling lonely or feeling lonely sometimes as compared to twenty-three percent of their typically developing peers (of whom only four percent reported always feeling lonely).

What are the consequences of feeling so alone? A report in the Annals of Behavioral Medicine [(2010) 40:218-227)] concluded, "Chronic perceived isolation (i.e., loneliness) is characterized by impairments in attention, cognition, affect, and behavior that take a toll on morbidity and mortality through their impact on genetic, neural, and hormonal mechanisms that evolved as part and parcel of what it means to be human" (224). We are social creatures and people simply can't live full lives if they are disconnected.

Youth groups can perform an important ministry that only they are equipped to handle. Students are strategically poised to change the culture of the lunchroom and create the space necessary for Matt to make friends. Where I can only enter the social world of the high school as a guest, students are the ones who set the rules of engagement. Furthermore, consider the psycho-social context of adolescence. High school kids are in that stage of development where they are motivated by ideals and are looking for causes, they are searching for something to invest their passions in, something worth giving themselves to. They are sensitive to hypocrisy; interested in social issues and have a sense that faith must be related to who they are. Yes, the thing they are whole-heartedly committed to might change next week. Nonetheless, there are many kids who are growing in establishing their identity who, if sold on the idea of reaching out to their peers with developmental disabilities, could form values and inclusive practices that could be developed throughout their lives.

What motivates them to make the choice?

Ben Conner runs a ministry to adolescents with developmental disabilities in Williamsburg, Virginia, and has taught in the field of Christian Education at Union Presbyterian Seminary and in the fields of Mission and Church History at Memphis Theological Seminary through the Center for Youth Ministry Training (CYMT).

His book, Amplifying Our Witness: Giving Voice to Adolescents with Developmental Disabilities will be published by Eerdmans in June.

Down Syndrome; Friendship
May 01, 2012 at 7:17 am
To add a comment you need to be a registered user or Christianity Today subscriber.

Can Kids with Disabilities HAVE Friends? by Ben Conner

Can Kids with Disabilities HAVE Friends? by Ben Conner